By Adrian Phillips, Author Of Hungary: The Bradt Travel Guide

One of the best things about going on holiday is trying some of the local delicacies - especially if you're going to somewhere new. Hungary has one of the most eclectic menus, thanks to its rich history, so you can enjoy plenty of dishes while you're in this beautiful country. 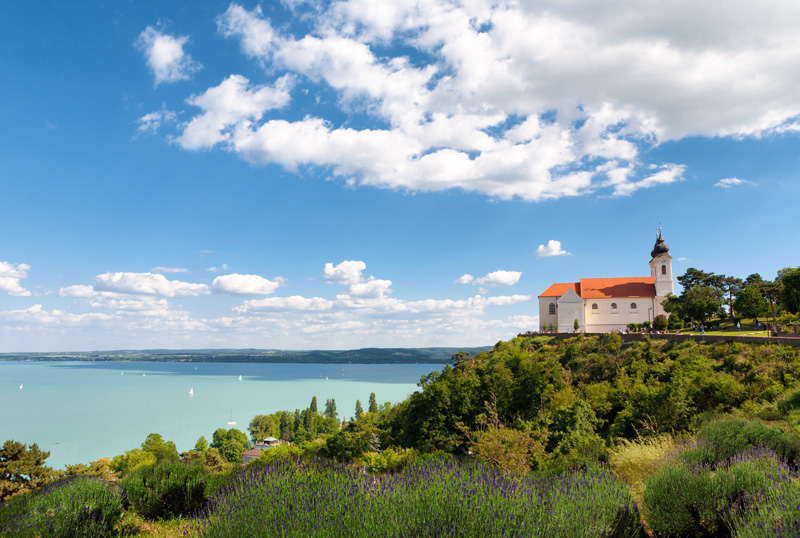 Lake Balaton is a beautiful destination to visit, with plenty to do for holidaymakers. Think lakeside picnics after a bike ride, afternoons spent lazing in the spa or a dip in Lake Hévíz's thermal waters, you will have a fun-filled or super chilled holiday here.

A Hungarian menu is rather like a history book. Pasta, onion and garlic? That’s down to the 15th-century Italian scholars and artists who brought these ingredients to the Renaissance court of King Matthias.

Pork? Well, that became popular during 150 years of occupation by the Turks, who were Muslim and left pigs to the locals.

Sauerkraut, dumplings and creamy cakes? All introduced when Hungary was ruled by the Habsburgs in Vienna.

In the years immediately after the fall of the Iron Curtain, eating out in Hungary wasn’t always a pleasure. 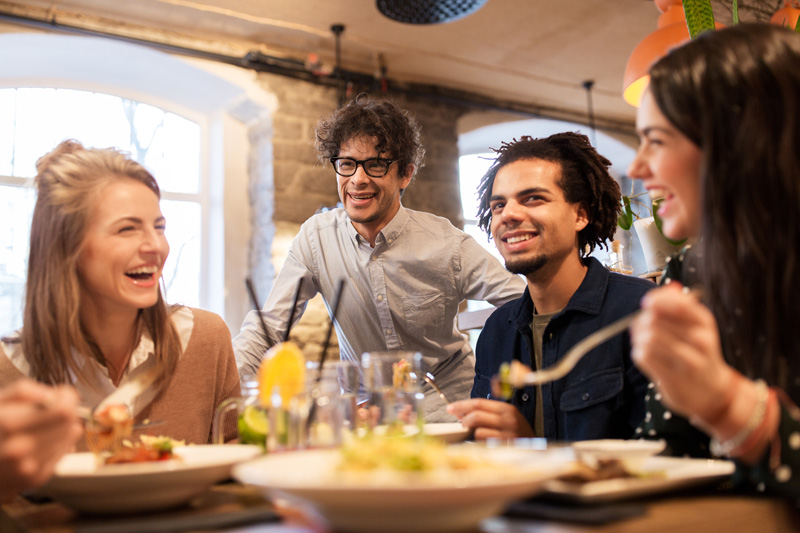 Restaurants took time to acclimatise to tourist expectations; food could be stodgy and service without a smile. But today that has all changed. The dishes are lighter and more imaginative, and the waiting staff more attentive. Vegetarians even have a proper choice beyond fried cheese or fried mushrooms!

Here are some Hungarian classics to look out for: 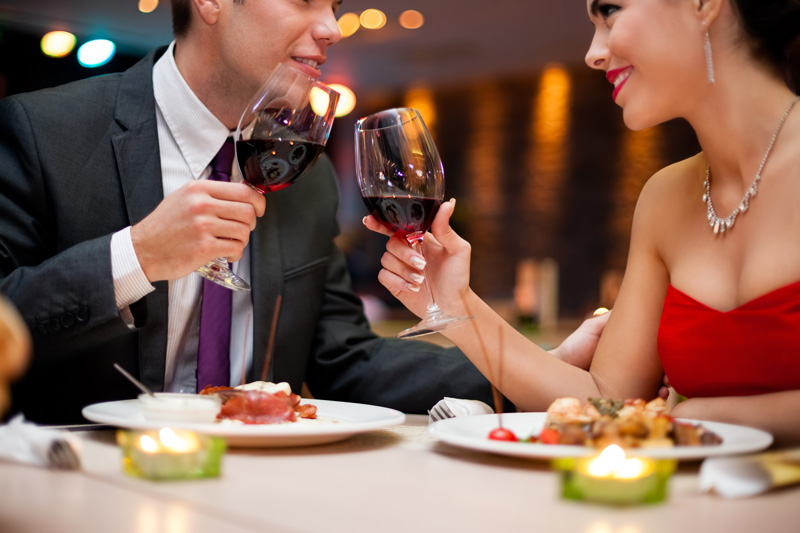 Have a romantic meal out and order some of the famous Hungarian wine. Hungary is peppered with beautiful vineyards so you'll be spoiled for choice.

Fish soup - As Hungary is landlocked, traditional fish dishes feature freshwater species from the rivers and lakes. At Balaton, you’ll find restaurants selling battered pike-perch (fogas) - also known as Zander - but look out for fish soup (halászlé) too. It might contain catfish, carp, eel or a mixture of different fish, together with onions, green peppers, tomatoes and the ubiquitous paprika. It’s also a popular dish at Christmas - the Hungarian ‘turkey and trimmings’! 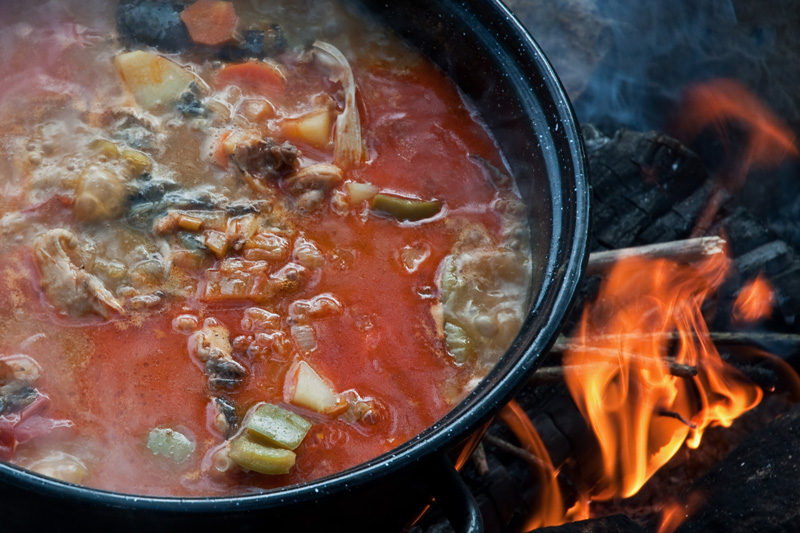 Freshwater fish from Hungary's many lakes and rivers are transformed into some traditional Hungarian meals. Fish soup (halászlé) is a great main course - packed full of various fish and lots of spices, you must try it. 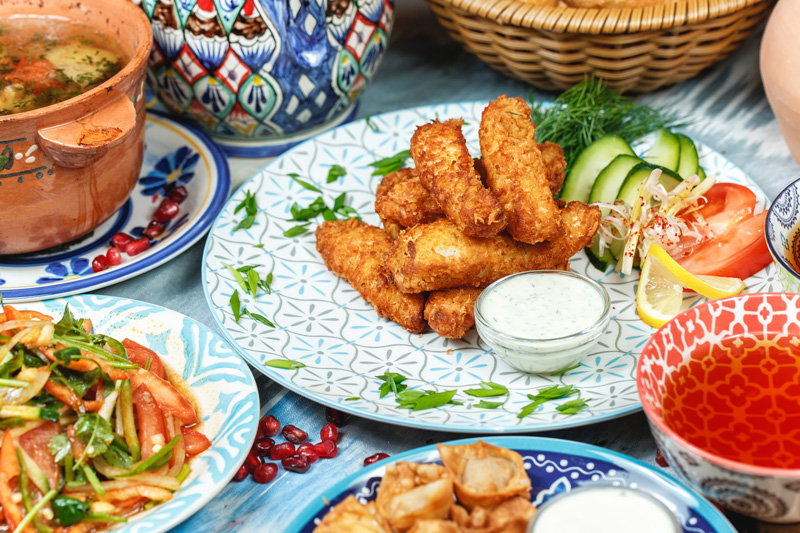 Battered pike-perch (fogas) is a bit of a delicacy in Hungary. These days it is a little harder to come by due to fishing regulations on the Zander fish, so if it does appear on a menu, don't waste your chance!

Gulyás - Better known as ‘goulash’, of course, and arguably Hungary’s most famous export. Gulyás means ‘herdsman’, and originally this was a dish cooked in cauldrons by cowboys driving their cattle across the grass plains. In restaurants, it’s served as a soup rather than a stew and contains beef, vegetables and paprika. 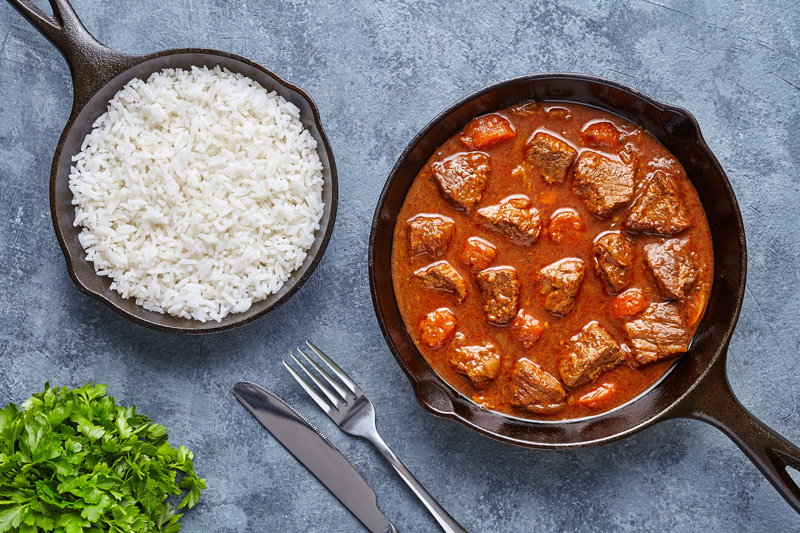 Is there ever a more famous Hungarian export than goulash? There are several different variations, but you will usually find beef and vegetables packed in there - delicious and a must-try dish while you're in Hungary.

Hortobágy pancake - If you asked me to choose a Hungarian dish over all others, it would probably be Hortobágyi palacsinta. Named after the Hortobágy region in the east of the country - but with no real link to it - these baked pancakes are filled with minced veal and topped with a paprika sauce and sour cream. 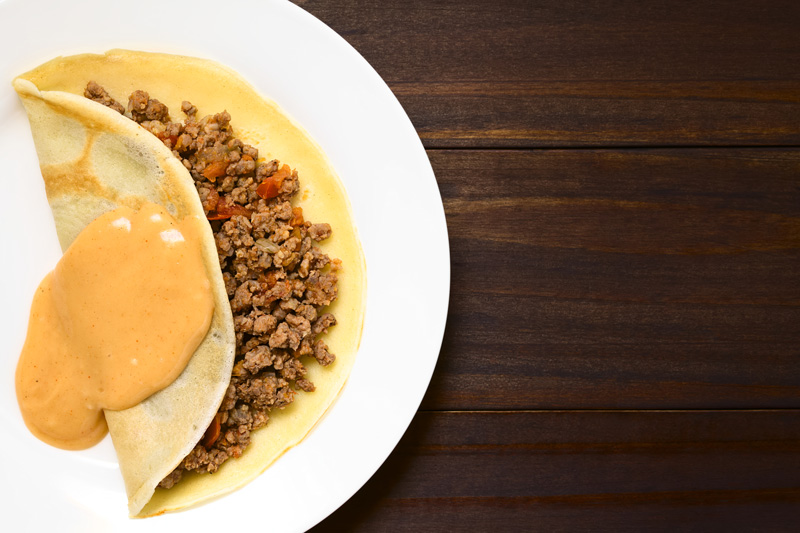 Hortobágyi palacsinta is another Hungarian staple dish. A pancake filled with minced veal with paprika and sour cream - sounds tasty.

Stews - The stew that foreigners associate with goulash is called pörkölt, which means ‘roasted’, and features beef, pork, lamb or chicken cooked with onions and paprika, usually accompanied by pinched egg noodles called nokedli. Another stew is paprikás, generally featuring chicken and a thick, creamy and paprika-rich sauce. 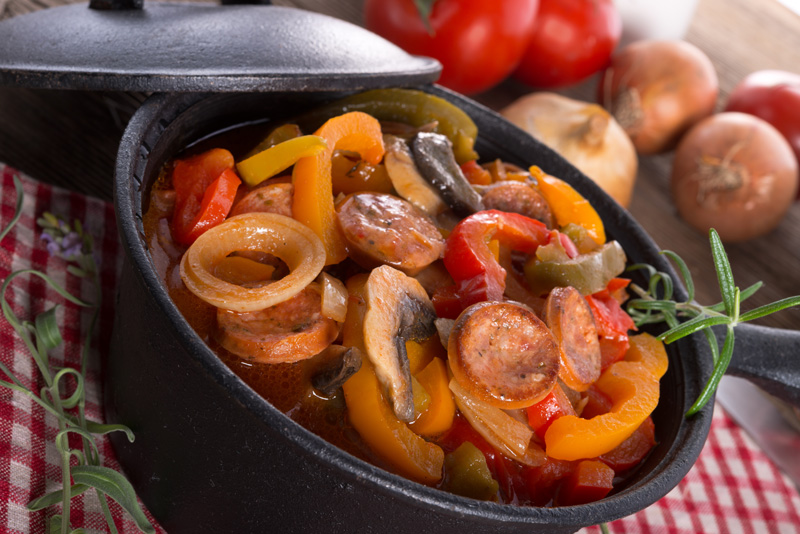 Typically, the Hungarian menu is packed with hearty and meaty dinners and stews are one of those. Restaurants will always have one or two on the menu and there are so many different varieties, you'll be able to try plenty of different ones throughout your holiday.

Gundel pancakes - Invented by Károly Gundel, who gave his name to Hungary’s most famous restaurant. This crêpe contains crushed walnuts and rum, and is smothered in a dark chocolate sauce. It is said that the Gundel restaurant serves over 20,000 portions of this dessert a year!

Főzelék - The ultimate in comfort food - indeed, in some ways close to baby food in texture - főzelék is essentially a plate of puréed vegetables thickened with flour. It’s cheap, filling and typically eaten at home rather than in restaurants, although you might find it as a snack food in some bars. 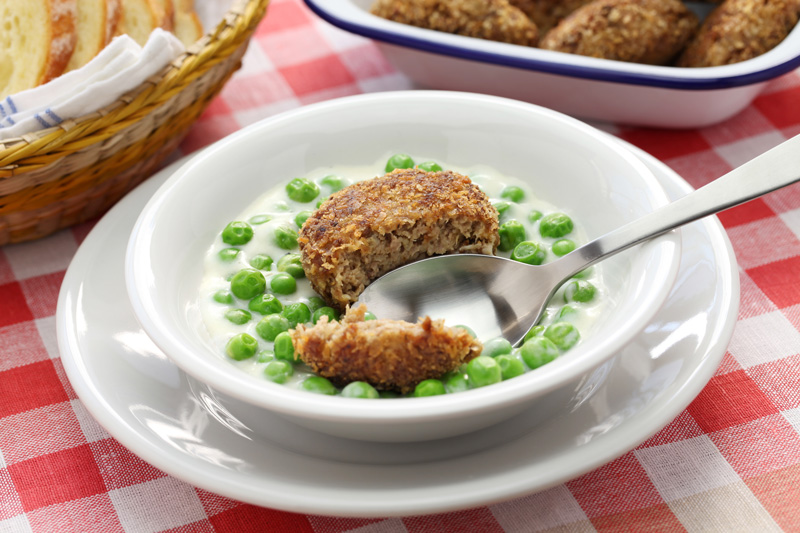 If you're after indulging in a plate of comfort food then Főzelék is what you want to eat. Főzelék is basically puréed vegetables thickened with flour - and so delicious.

Fruit soup - At first sight, you might think it’s a translation error on the menu. But, no, cold fruit soup (hideg gyümölcs leves) - often made with sour cherries - is a popular starter, and a refreshing option when the sun is beating down on the Balaton shoreline. 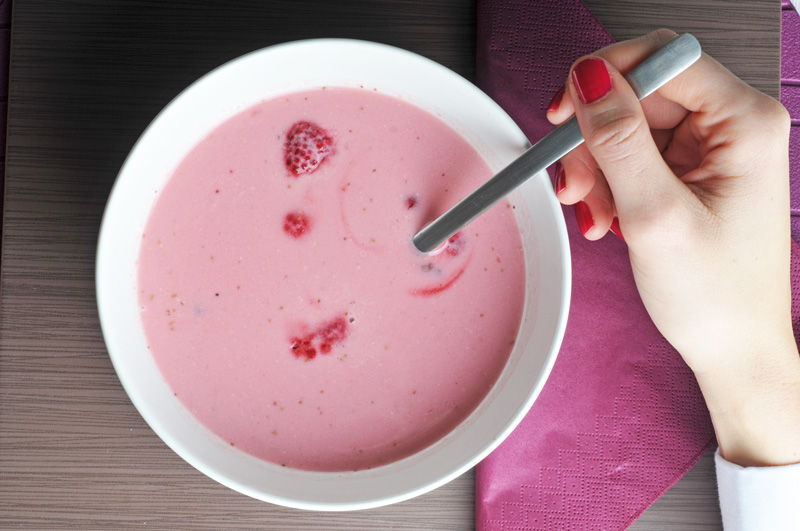 It might sound a bit strange, but fruit soup is another tasty dish to try when in Hungary. It is cold and often made with cherries, though there are other versions. It makes for a refreshing starter, especially in the summer.

Cakes - Hungary has a proud café tradition, and cakes (torta) are taken very seriously. Esterházy cake, named after a leading noble family (their fabulous home, the Esterházy Palace, is around 60 miles northeast of Lake Balaton in Fertőd), has layers of walnut sponge and buttercream.

Dobos Torte was created by renowned confectioner József Dobos in the 19th century, and has a chocolate cream and caramel topping. And Somlói galuska is rather like a Magyar take on a trifle, a luxuriously messy mixture of different sponges, walnuts, chocolate and cream. Loosen the strings on your swimming trunks, and dig right in! 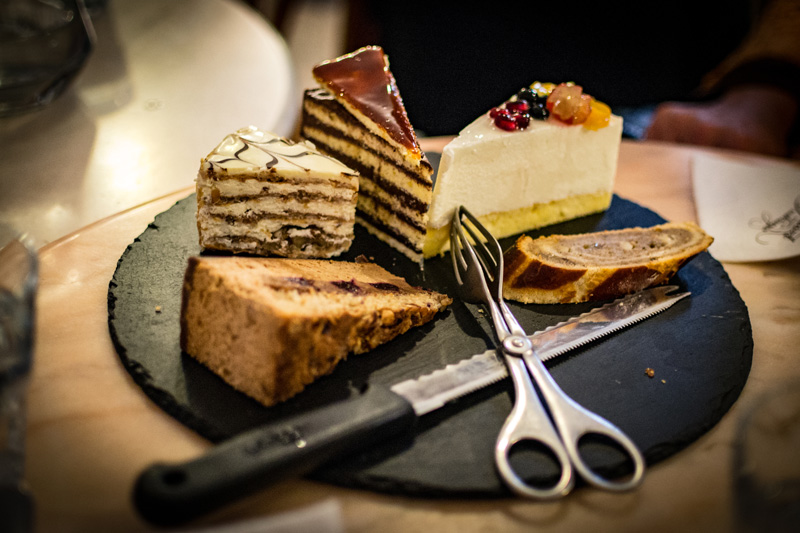 Cake is taken very seriously in Hungary, which makes it worth the flight there alone! Indulge in the Hungarian culture by trying lots of different desserts while you're there - you won't regret it.

So, while you're holidaying in this beautiful and interesting country, make sure you make your way through the Hungarian menu and you never know, you might find your new favourite dish! 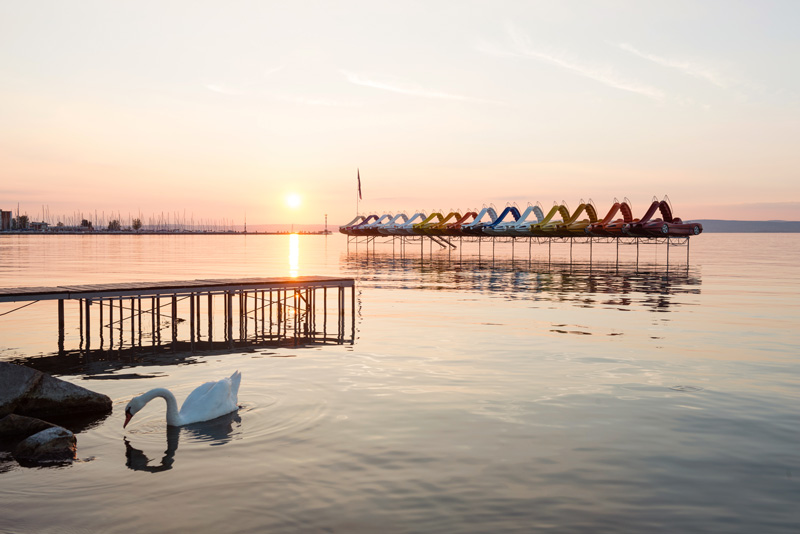 Now you've had a taster of the Hungarian menu, make sure you try some of these dishes when you're holidaying in this beautiful destination.

If you're a member of the RCI Holiday Exchange programme and want Hungary to be your next adventure, there are 16 RCI-affiliated resorts to choose from. To see what there is on offer, check out our Resort Directory below.

Racing To Hungary For The Formula 1 Grand Prix

Top 10 Things To Do In Lake Balaton