This year Christel House celebrates its 20th anniversary and it has much to be proud of. Founded by RCI's co-founder, Christel DeHaan, the children who entered its doors 20 years ago are now graduating and proving the charitable foundation is succeeding in its mission to break the cycle of poverty and in its goal to foster citizens of good character who want to give back.

Christel DeHaan not only reshaped what a holiday could look like when she founded RCI and put timeshare holiday exchange on the map more than four decades ago, she also set out on a mission which is making a world of difference to the lives of impoverished children in some of the poorest communities around the world. She built a foundation to take in underprivileged children which feeds them, provides them with medical care, an education and gives them a fruitful future.

DeHaan's holistic approach to changing the lives of the children also embraces character and life skills development, ensuring that the Christel House children would grow up to become socially responsible and caring adults. In one of many interviews for RCI's magazines, DeHaan explained: "Christel House focuses on lasting transformation, not temporary sustenance. It is the difference between giving a man a fish for a meal today, or teaching him to fish to provide for himself and his family in the future." 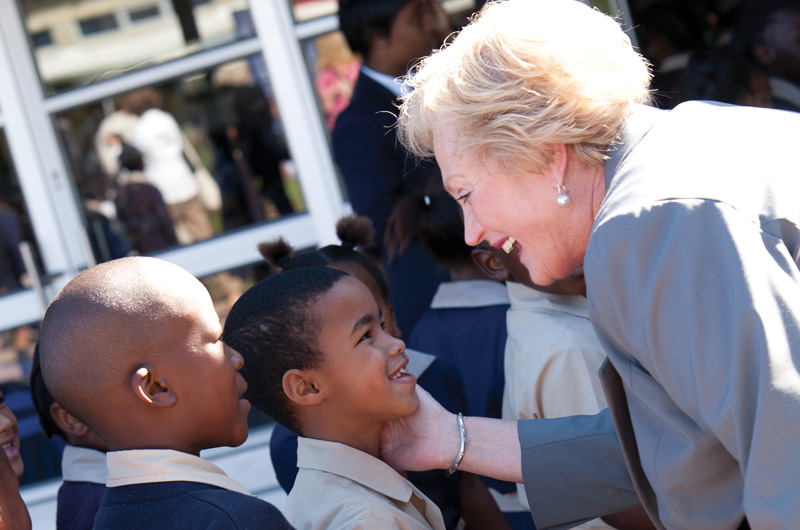 Christel DeHaan has spent a lifetime giving impoverished children a real future. For her, it is about making a lasting transformation in their life, and her work has changed the lives of so many children around the world.

Christel House International opened the doors of its first learning centre in 1998 in Mexico City. In the following four years, centres were opened in India, South Africa, Venezuela and the US. Today, Christel House is helping more than 4,000 students, their families and communities. It employs over 350 professionals dedicated to helping the students to grow into confident, healthy, hard-working and ethical young people who will go on to give back to their own families and communities in the future.

From the start, DeHaan has paid all the charity's administrative and fundraising expenses so that you can be sure 100 per cent of all donations will be used directly to run the programmes and services that benefit the children. Christel House is RCI's 'Charity of Choice' and many of RCI's friends, business associates and resort developers across the globe are very generous in their support of the charity. 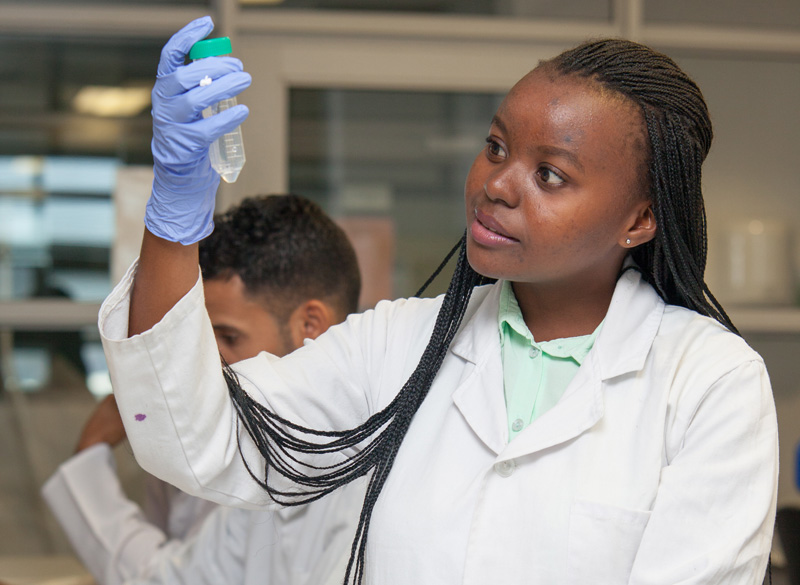 Christel House South Africa in Ottery, serving poor communities in Cape Town, celebrated a 97.8 per cent matriculation pass rate - being well above the national average for the tenth consecutive year.

Christel House South Africa in Ottery takes in the impoverished children from Cape Town and like many of the nine schools now run by the charity, has great cause for celebration - it has achieved a 97.8 per cent matriculation pass rate, and boasts a pass rate which has been well above the national average for 10 consecutive years. All the students at this school come from extremely poor communities in Cape Town and have had to overcome tough personal circumstances to, quite literally, make the grade. 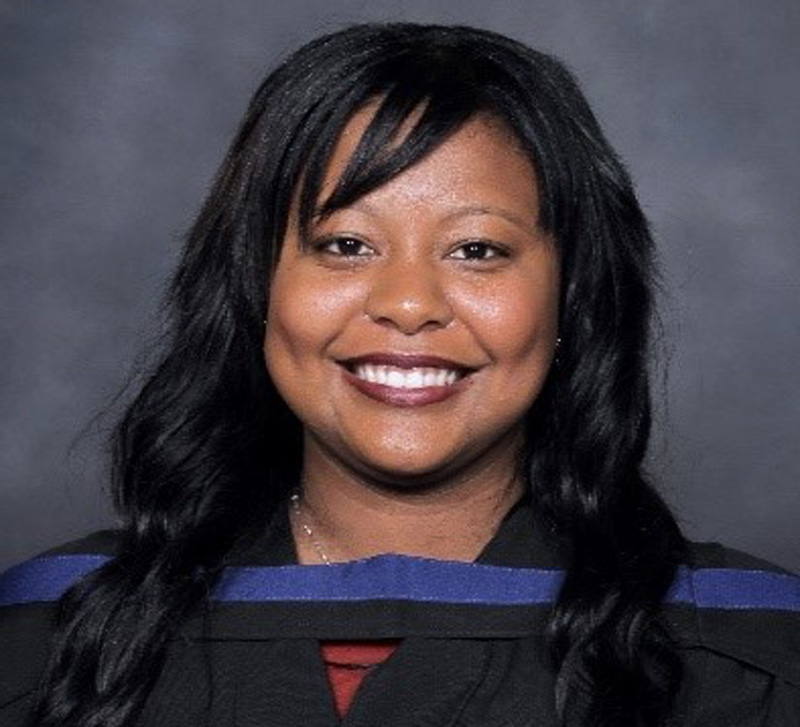 Kristen Matthews graduated from Christel House in 2010 and she describes herself as an unhappy and unlucky child. She says everything changed for her when she found Christel House.

I was nine when I started at Christel House in 2002. Even at that young age I had already learnt the ways of hardship and poverty. My Mom worked long hours and my father was unemployed, so every day after school my brother and I ran home to fetch our baby sister from a neighbour's house. We would then go home to juggle changing diapers, doing homework and completing all our chores before our parents returned home to a meal which had been cooked by either my brother or myself.

Growing up in notorious Manenberg - a township on the Cape Flats - I always hoped for something better... A home filled with toys and happiness. Sadly, my home was like so many in our neighbourhood, places where substance and emotional abuse are served with breakfast, lunch and supper. Unemployment is high. The misery of poverty greets you at dawn; gunshots wish you goodnight; and drug addicts want to be your friend. Christel House was my safe haven.

At Christel House everything changed for me. I went from being unhappy and unlucky, to being the happiest and luckiest kid ever! I was taught values, morals, etiquette, communication skills, emotional intelligence, education, how to be happy - everything. My Christel House journey has been precious. From being picked up in the morning, receiving a quality education, wholesome meals and lifelong values, Christel House was my family. 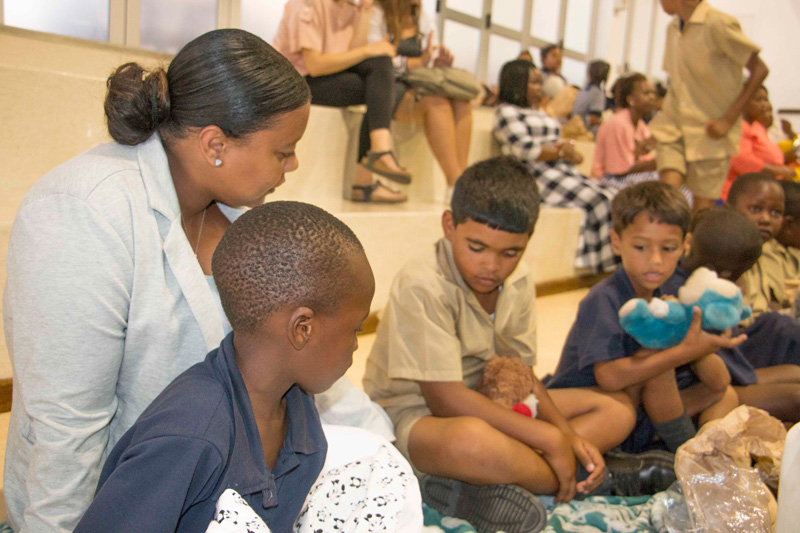 Since graduating in 2010, Kristen gives back to Christel House by working as a PR officer to help with fund raising, as well as coaching the children when she can. She is pictured here helping the children on national Read Aloud Day.

A Christel House teacher taught me fencing and so now, on weekends, I offer free fencing lessons to the children in Manenberg. I have trained and coached my little sister in fencing and she is ranked number 3 in the whole of South Africa. I was ranked fourth in the country in 2010, the year I graduated, and I went on to study to become a professional fencing coach in Senegal, West Africa, for a year.

That year was one of the toughest of my life because my Mom fell ill, but the grit, strength and resilience I learned at Christel House helped me achieve my goal. I now also work with younger people in my community to help them make decisions about their future, apply for schooling and to find meaningful jobs. I want to help those children in my community, just as Christel House helped me and so many others. 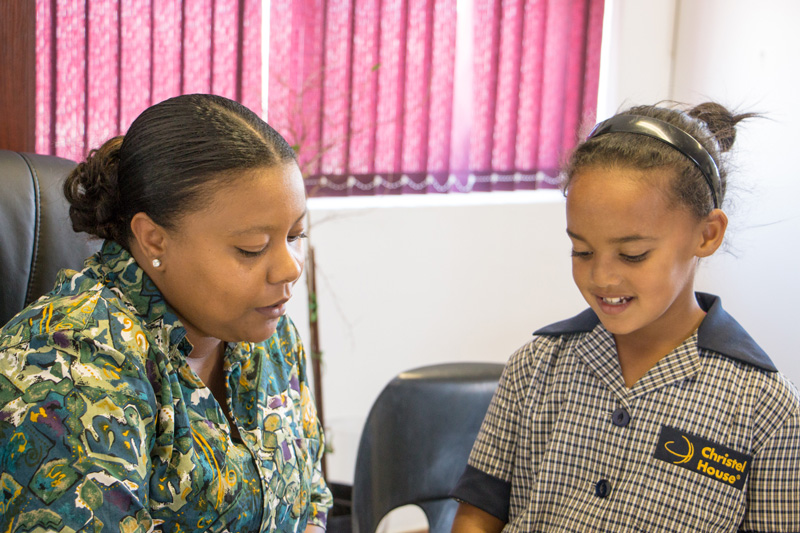 Kristen is pictured here helping a Grade 1 student with her studies. many of the Christel House graduates give back in this way to help more poor children escape the cycle of poverty.

Today I am a university graduate, having completed a degree course in Digital Marketing. I aim to start a second degree in Communications Science this year. Equally important to me is to put something back into Christel House and so I also work as a PR and Communications Officer for Christel House South Africa, assisting in finding funding for my fellow Christel Housers. It is a life-changing experience because, at last, I am not on the receiving end, but now helping Christel House and its students; I am giving back.

Christel House taught me to become independent, responsible and respectful. Importantly, Christel House gave me integrity and I know that is the foundation to living a successful life. 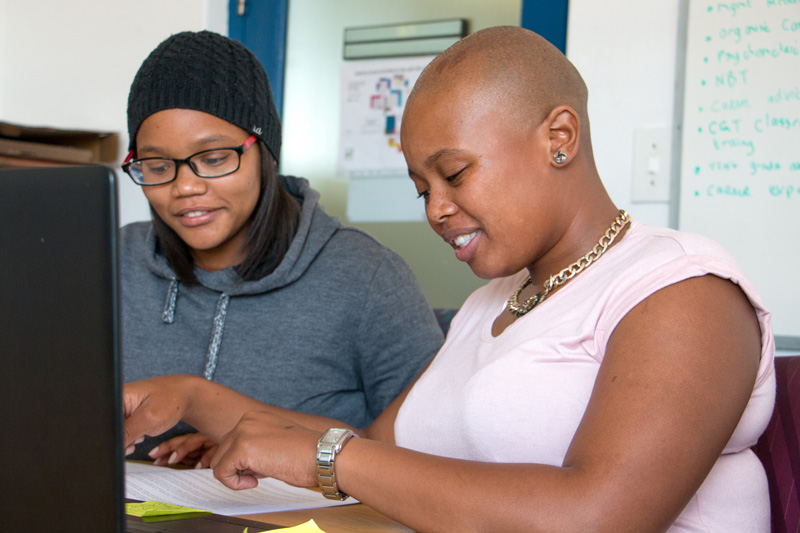 Amanda graduated in 2010 from Christel House South Africa and now works as a College and Careers Operator, helping other students to find their way in life.

I come from a small township called Langa where there are so few, if any, strong role models. The township faces socio-economic challenges driven by factors such as drug abuse, teenage pregnancy, HIV, AIDS, and the rest... My mother was my role model. I grew up looking up to her as the only breadwinner in our home.

I enrolled at Christel House in 2002 in Grade 4 and I matriculated in 2010. Having studied hard at school I got one of many opportunities offered to Christel House students when one of its biggest sponsors, Dell Computers, funded my degree education at the University of the Western Cape. I studied for a Bcom degree, majoring in Information Systems. After my graduation I was offered a 12-month internship with Dell in Johannesburg.

Unfortunately, I had to return to Cape Town after only seven months of my internship because my Mom passed away and I now had to take on the role of mother to my younger brother. 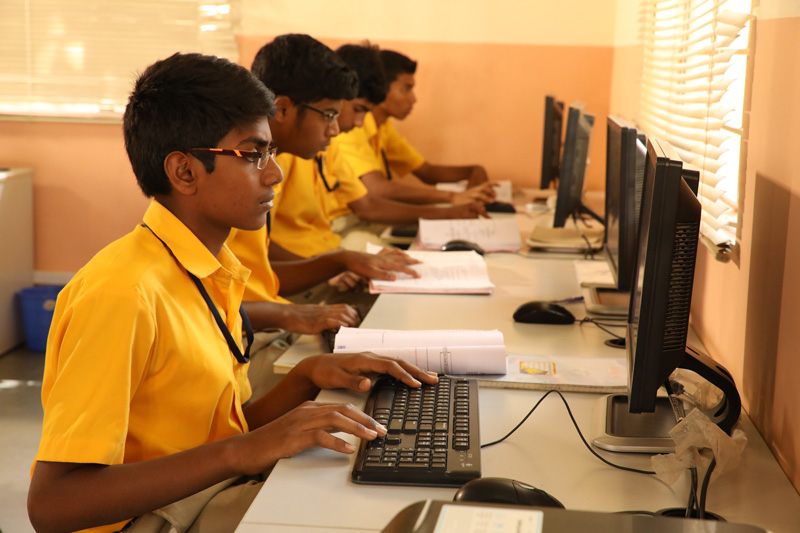 Amanda worked hard at her Christel House school and was rewarded with an offer of funding by Christel House sponsor, Dell Computers, for her degree course. Upon graduation Amanda took up the offer of an internship with Dell.

I now work at Christel House South Africa as a College and Careers Operator. My role is to support the holistic aims of our school to break the cycle of poverty and instil good life values in our students. I coach and mentor learners from a young age, through to high school and beyond. In my role, I engage with my students on a personal level and help them to understand more about the career paths open to them, and to consider the best career path for them. This involves my students' teachers and parents in those discussions, as well as the students. We call this a 'squared model', because it involves parent, teacher, learner and my team - College and Careers.

We look to increase their understanding of success after Grade 12, that it doesn't only entail a university degree, but can take the form of other learnerships, qualifications and voluntary work in the field of their choice.

With our previous CEO, Nicky Sheridan, I started a mentorship programme for learners in high school to ensure they had someone coming from the same background as themselves to share a realistic story of life after school with them. As Christel House mentors we are aware of the daunting gap between Grade 12 and the working world, or going onto university, so it is our job to make that transition less daunting for our students. 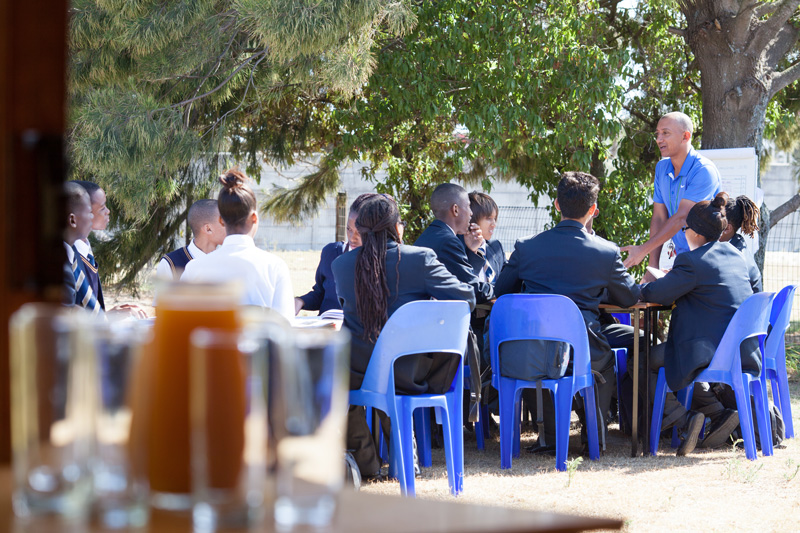 The holistic approach to education and the development of life skills at Christel House gives the children passing through its doors so much more than qualifications and, now that graduates like Amanda are going out into the world beyond the school, they are able to provide a valuable mentoring role to ease the transition from school to college and the wider working world for the students.

Christel House has changed my life. I don't know where life would have taken me if it wasn't for Christel House because school here is not only about education, but it also teaches us about having confidence and an 'I can achieve anything I put my mind to' attitude. Through its character development programme, Christel House has helped me not only to achieve things that once seemed unattainable, but core values and morals that have got me through the most trying times in my life. As a young person you have lots of life choices and Christel has helped me a great deal in making my decisions.

My goals for the year ahead are to succeed in my post-graduate studies - I am now doing a course at the University of Cape Town in Business and Systems Analysis - and to make a bigger impact on the students of Christel House South Africa. 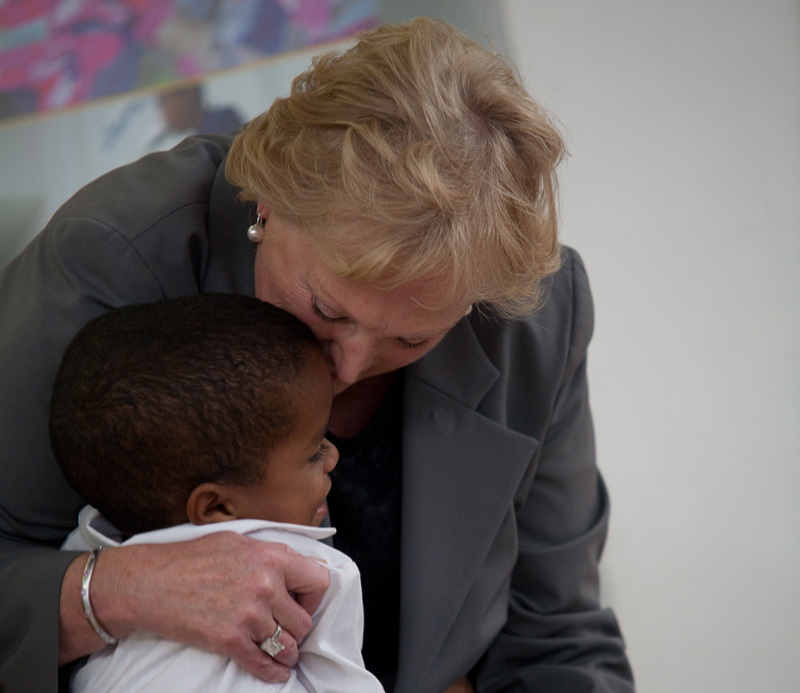 Christel DeHaan is the caring 'mother' of a global family of children and young adults of whom she can, rightly be, very proud.

You can make a real difference to children like Kristen and Amanda by making a donation to the Christel House International Foundation. Founder, Christel DeHaan covers all the administrative and fundraising costs herself, to ensure that every donation is used for the benefit of the children in her nine learning centres across the world.

If you would like more information about Christel House and its work, or help in giving a donation, you can email Elizabeth Taylor on etaylor@uk.christelhouse.org or visit the website below.

If you want to learn more about the company that Christel DeHaan founded in 1974, click on the button below. RCI is now the world's leading timeshare holiday exchange company and was started, like the Christel House International Foundation charity, by an innovative and caring woman who wanted nothing more than to make things better.