Colour, costumes and a celebration of culture all come together in some of the world’s most spectacular carnivals. From crowning kings and queens to music, masquerade and merriment that lasts all night long - these events have long been a staple in the cultural calendar.

Carnivals last for days - or even weeks - with both locals and tourists celebrating and having fun together. Here are just a few of our favourite carnivals to whet your appetite and inspire your holiday planning.

Arguably the most famous carnival in the world, Rio Carnival has been putting on the ultimate show since 1723. The colourful five-day spectacular features sequins, feather boas, parades, and some of the best dancers in the world, drawing crowds of up to two million people a day.

At the opening ceremony, the Carnival King is crowned, before the parades start, which are, of course, the main attraction. Here, the best Samba schools in the city will parade competitively for the judges' points and entertain the audience with their flamboyant costumes, stunning dancing and endless energy.

Leading the parade, is the Porta Bandeira, or flag bearer, who dances alongside her protector, the Mestre-Sala. Originally the person in the protector role would have been armed with a knife to protect the flag bearer from other Samba schools who may be out to encourage the deduction of points. Thankfully, this is no longer the case. The tough part of the job today is keeping the flag from touching the Porta Bandeira's body or the flagpole, as this will lose points. 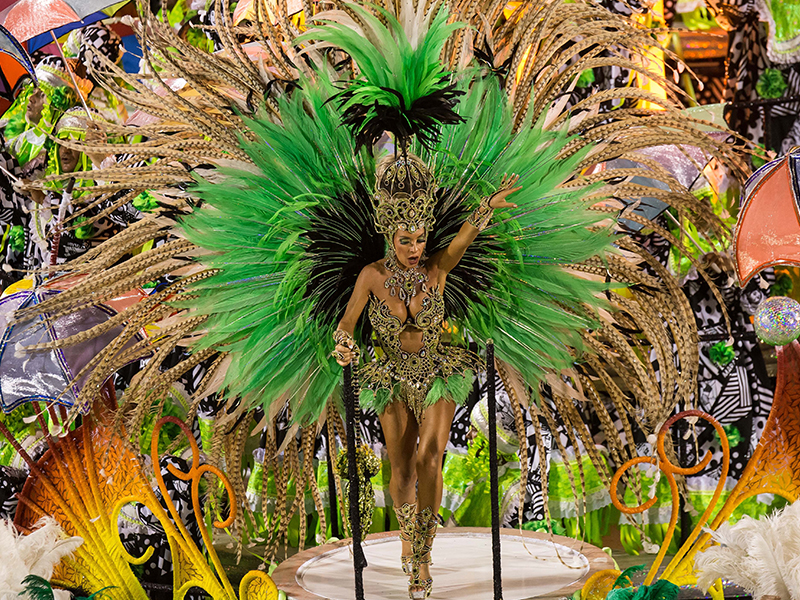 Arguably the most famous carnival in the world, Rio Carnival is one of the biggest parties on the planet. Filled with colour, music and some of the best dancers in Brazil, it's unmissable.

The floats of feathered and sequin-clad women follow behind them, and each Samba school has just 80 minutes to parade up and down the Sambadrome to impress the screaming crowd and the judges.

If you don't manage to secure a ticket to this big event, you won't miss out on all the fun. Throughout the carnival, street festivals and parties are in full swing across the city, with streets closed and revellers gathering en mass to dance the night away. Rio Carnival takes place in March this year, and next year it kicks off on 23 February.

With its seaside location and tropical meets trendy vibe, a trip to Rio de Janeiro at any time of the year is always a good holiday idea. World-famous beaches, Ipanema and Copacabana, are perfect for getting in a morning of relaxation before hitting the parties later on.

You can't go to Rio de Janeiro without visiting the imposing Christ the Redeemer statue, one of the most famous landmarks in the world and, if you’re looking for sunsets that are as colourful and vibrant as the Samba, this is the perfect viewing spot.

Bringing a taste of South America to the Canary Islands, Carnival of Santa Cruz de Tenerife takes place each February in a spectacle of frivolity and fancy dress. Europe's biggest carnival, and second in the world only to Rio, it attracts visitors from all around the world. Each year, the carnival takes on a fun theme voted for by the public, with previous themes including, Hollywood Musicals (2005) and Horror Films (2009). The carnival is currently in full swing, and this year's theme is The Deep Sea.

Traditionally, Carnival of Santa Cruz de Tenerife begins with the crowning of the Carnival Queen. Once elected, the parade announcing the commencement takes place, and the streets fill with locals and tourists - with many partygoers donning fancy dress, extravagant wigs and sky-scraping heels to join in the party. If you're looking for fun, fancy dress and feathers, Carnival of Santa Cruz de Tenerife is the place to be.

The carnival comes to a close with the Burial of the Sardine - a procession in which the spirit of the carnival is carried through town before finally being set alight.

Renowned for its sunny climes and beautiful beaches, the carnival is not the only reason to visit the lovely island of Tenerife. As the largest of the Canary Islands there’s no shortage of activities all year round, with whale- and dolphin-watching, wine tasting and visits to the spectaular Mount Teide all being popular activities.

It’s worth booking a holiday to Tenerife well in advance if Carnival of Santa Cruz de Tenerife is on your itinerary, as the island soon fills up with visitors looking to become part of the biggest party in Europe. To enjoy the carnival here, you need to book your visit from 27 February to 10 March.

The world famous Venice Carnival first began in the 11th century, comprising of more than two months of celebrations. However, it came to a halt during the 18th century before being brought back to life in 1979. Today, the celebrations span the ten days leading up to Shrove Tuesday.

Famed for masks and majestic balls, Venice's annual carnival makes it impossible for visitors to resist the allure of the glamour and historic culture of this event. When it comes to costumes, anything goes. Traditional 18th century lords and ladies remain firm favourites, but these days visitors will don an array of fancy dress, often accompanied by the all important Venetian mask, of which there are many characters to choose from. The Bauta mask covers the face, whereas the Columbina covers the eyes and nose. These masks gained popularity thanks to Commedia dell’arte, a popular form of traditional Italian physical theatre.

Elegant balls are the ideal way to show off these delicate disguises and options range from exclusive and expensive ticketed parties, to the free and inclusive street entertainment and parades. One free event not to be missed is the 'Flight of the Angel' in St Mark’s Square, in which the Maria - or carnival queen - from the preceding year's carnival 'flies' down from the bell tower in the square to the cheers of the audience below. To catch all this glamour and glitz, you need to visit Venice between 16 February and 5 March. 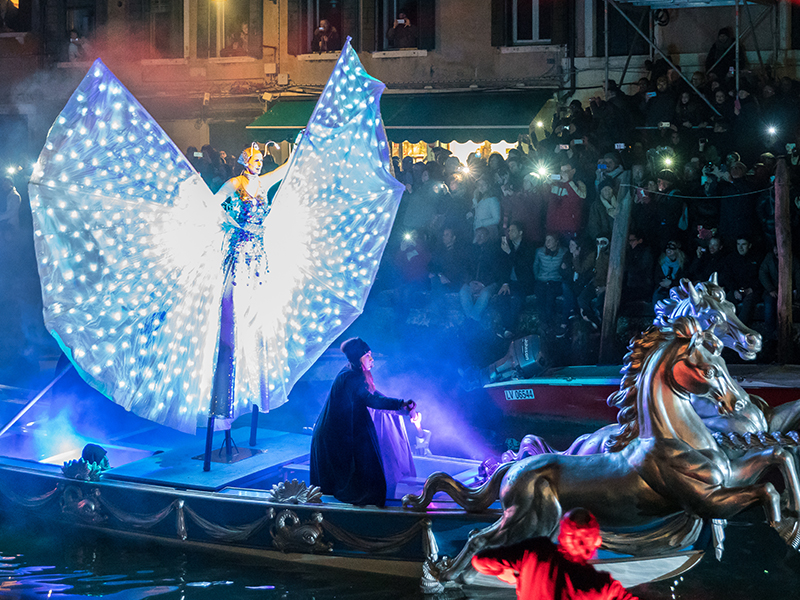 Famed for masks and majestic balls, Venice's annual carnival is elegant and traditional, so you can dress up as a lord or a lady and head into the ballroom for a glamourous evening to remember.

Winding waterways and delicious cuisine have made Venice a firm favourite with holidaymakers looking for romantic getaways and holidays brimming with culture. With boutiques and bars lining the canals, and stunning architecture at every turn to gaze at, there is so much to do in one of the most romantic cities in the world. Wander the cobbled streets and revel in the delightful restaurants and pretty squares where you can stop for a refreshing drink and watch the world go by.

You can even learn to row your own gondola with Row Venice, one of the most popular and exciting attractions!

The Notting Hill Carnival is one of Europe’s biggest free street festivals, having taken place on the August Bank Holiday weekend since the mid-1960s.

Originally organised for local children, the event has gained a massive following over the years of locals, and visitors who travel from far and wide, to enjoy the party, which is firmly rooted in Caribbean culture. Music, dancers, and a myriad of performers fill the streets of this picturesque part of London, with the colourful houses of Notting Hill providing a very pretty backdrop to the action. 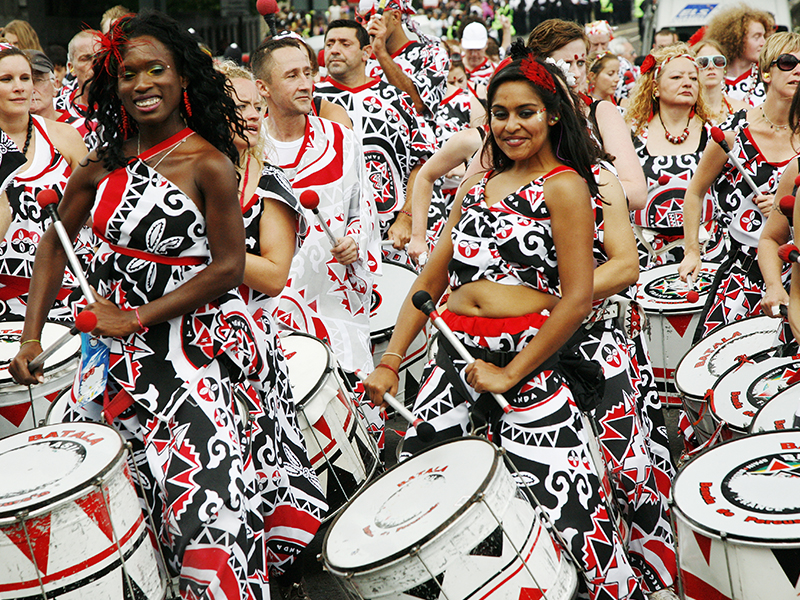 Notting Hill Carnival is a celebration of everything Caribbean. Expect to dance to reggae music and feast on jerk chicken and Red Stripe beer.

Reggae and Samba music blazes out of speakers, and dancing in the street is very much encouraged. Street food is endless, with sellers providing delicious traditional Caribbean delicacies, such as jerk chicken and Red Stripe beer, being the crowd favourites. At the heart of the event is the parade featuring a wealth of Mas (Masquerade) Bands leading the way in elaborate costumes and a flurry of feathers.

London is the ideal destination for every kind of traveller. From food markets and West End shows, to world-class shopping and interesting museums, the city is easy to navigate via public transport. The royal parks are perfect to explore or wander around whatever the weather, with Regent's Park and Primrose Hill in the north and Greenwich Park in the south, offering exceptional views of London's famous skyline.

The street art of Shoreditch makes for perfect photo opportunities, before exploring the local antique and flower markets with a locally roasted coffee firmly in hand. Walk the cobbled streets and take in the history of the City of London all before settling into a cosy pub for a well deserved drink.

Mardi Gras is New Orleans’ biggest party, comprising of music, parades, picnics, floats, and performers dressed in elaborate costumes. These performers often throw beads and trinkets out into the crowd, so make sure you get a good spot!

Celebrations start in January. Purple, Green and Gold are the colours of the Mardi Gras, representing justice, faith, and power, respectively. Several parades organised by a variety of Krewes happen across the city in the carnival run up to Mardis Gras. Founded in 1872, The Krewe of Rex is one of the oldest participating groups in Mardi Gras and, every year, one member is selected to be 'Rex', or the Monarch of the Krewe. It’s a prestigious title that always goes to an influential New Orleans resident and their identity is kept a secret until Lundi Gras - the day before Mardi Gras.

Mardi Gras or 'Fat Tuesday' is the last day of the carnival and always falls before Ash Wednesday. The carnival season itself kicks off in New Orleans in January, when there are months of eating, drinking and being merry, before Lent, which comes with all its sacrifices. Carnival ends at midnight on Fat Tuesday and the Mardi Gras begins. Visitors tend to want to be there for 2 March each year. 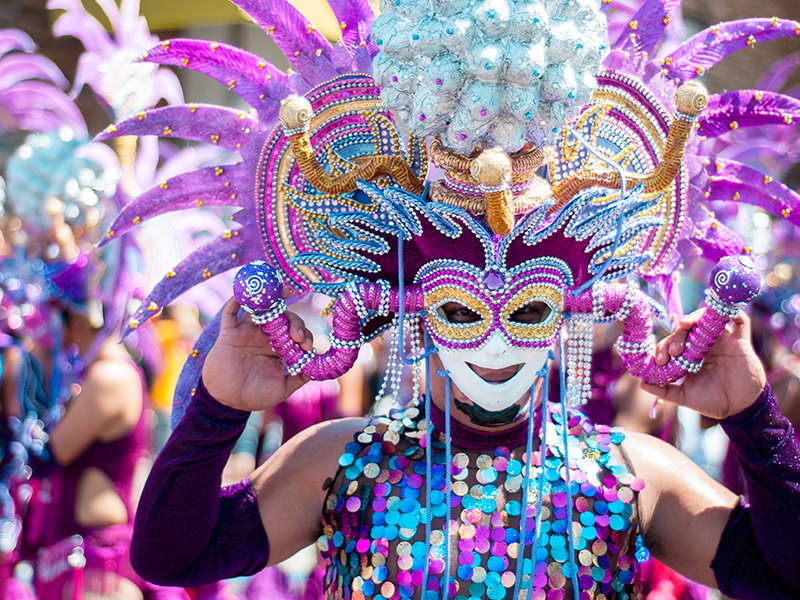 Mardi Gras is New Orleans' biggest party. Performers in extravagant costumes dance on parade floats and throw out colourful beads and trickets to the crowds - so make sure you get a good viewing spot!

Many communities throw parties to go alongside the parades and King Cakes are a firm fixture of the parties. A decadent bundt cake, made of a brioche dough and topped with cinnamon, chocolate and cream cheese, is one of the most delicious desserts. Baked inside of every King Cake is a small plastic baby figurine and the person who receives the slice with the baby in is said to gain good luck, and in turn, will be in charge of providing the cake for the next year’s festivities.

New Orleans is the most populous city in the state of Louisiana and the city is home to smooth jazz and delicious Creole food. Famed for music, visitors can expect to find it everywhere, from the ornate balconies of the French Quarter, to the walkways of the Mississippi riverfront - the ideal place for an evening stroll. Traditional beignets and gumbo are some of the best local foods to try here in the city that’s a true delight for all the senses.

If you're looking to book your next holiday and want to see where your RCI membership can take you, click on the Resort Directory button below and start your search.

If you own timeshare but are not a member of RCI, click on the Join RCI button below and become part of our holiday exchange community in a few simple steps.