Is anyone more deserving of a special treat than our mum? So why not take yours on a getaway to one of these perfect destinations this Mother’s Day?

With the rush of daily life, few of us get to spend as much time as we might like with our parents. A trip over Mother’s Day gives us an opportunity to take in some great European destinations, full of great food and wine, history, culture and relaxation - the perfect mix for the perfect mum. 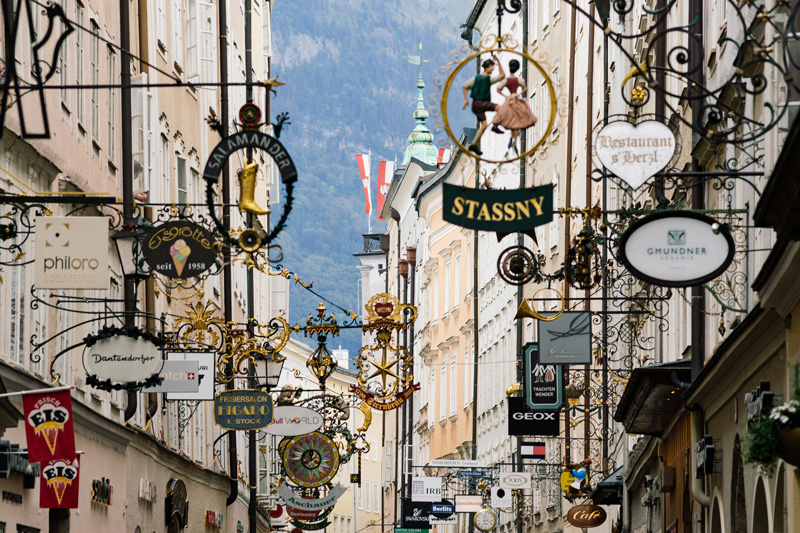 Austria’s Salzburg region is famous for being the location where classic musical, The Sound of Music, was filmed.

Austria’s Salzburg region is famous with mums everywhere as the location of the classic film, The Sound of Music, but there's so much more to enjoy here.

At this time of year, the Austrian Alps and nearby towns, such as, Bad Gastein, will still be blanketed in snow, so it’s a great time to hit the ski slopes. But if you and mum are not winter or adventure types, plan your trip for later in the spring or early summer when the snow has melted, and the hillsides are a verdant green with meadows of flowers bursting into bloom.

It’s an ideal time to be in the town of Bad Gastein, as not only does it have the mountains within easy reach, but has a charming centre, as well as being a well-known spa town.

First of all spend a day in the countryside breathing in the fresh mountain air along its 372 miles of hiking trails. As you rise above the town you can soak up panoramic views of mountain peaks and lose yourselves in peaceful pine forests. Punctuate your hike with breaks at mountain huts where you can rest, enjoy a hearty meal, and listen to the distant sound of cowbells.

Then, at night, enjoy the proximity to nature as the Milky Way and shooting stars come into view in the dazzling sky. 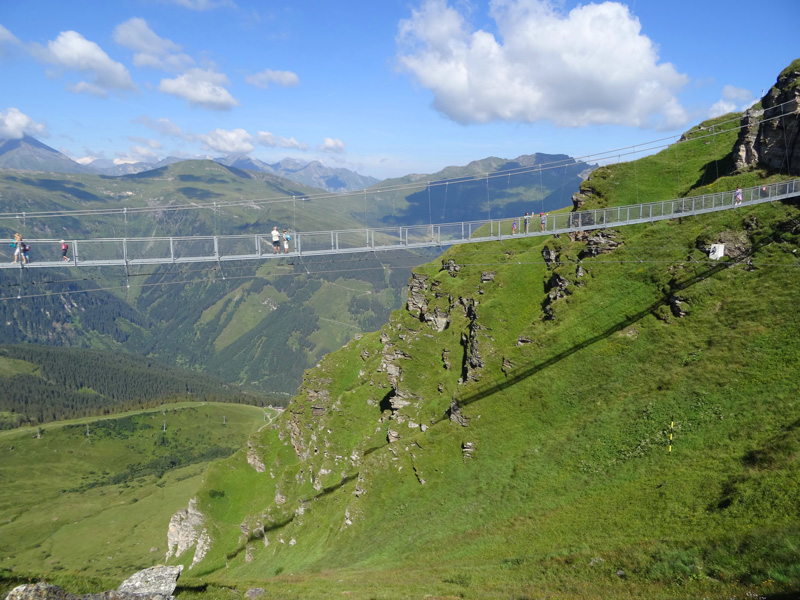 Bad Gastein is a spa town perfect for year-round holidays. During the winter months, skiing is popular and when the white stuff melts, the hills are great for hiking as they bloom in colour with wildflowers.

When you’re ready to visit the big city, hop on a train, or quicker still, take an easy hour and a half’s drive to Salzburg to explore one of the country’s most popular destinations.

Salzburg has an old-world charm with lovely architecture, delightful squares and the elegance you would expect from one of Europe’s most timeless cities.

Wander the old town and discover its history, and that of those who once lived here, such as composer, Mozart. Treat mum to lunch at the Stiftskeller St. Peter, which claims to be Europe’s oldest restaurant - a mere 1,200-years-old, but with a modern European menu of delectable dishes and a cellar with more than 16,500 wines. 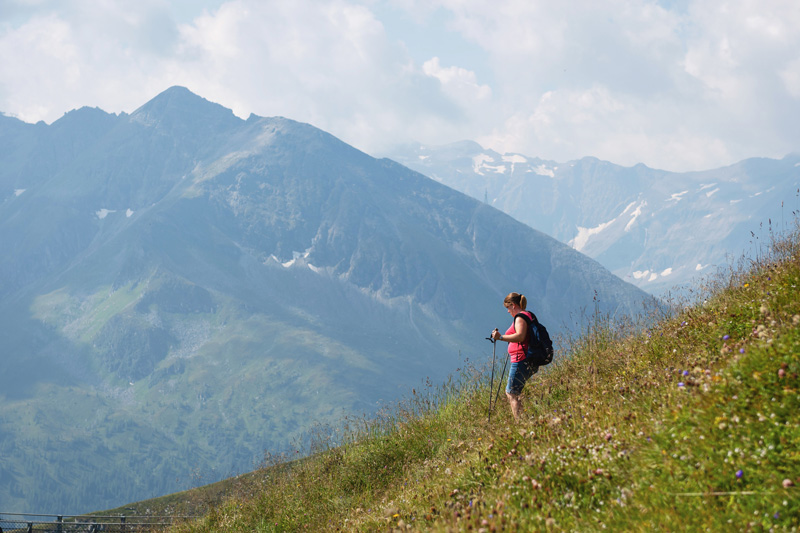 Enjoy breathing in the fresh mountain air along Bad Gastein's 372 miles of hiking trails, and take in the incredible panoramic views across the countryside.

Then take the nearby funicular up to the Fortress Hohensalzburg - one of the largest medieval castles in Europe - and spend time taking in its courtyards and chambers, plus views of the city and the Untersberg Mountain.

The fortress is just one landmark you’ll recognise from The Sound of Music, and from just outside the old town, you can pick up a coach tour to other locations from the film. This is a day trip in itself, though as you will take in places in the city, such as the Mirabell Gardens, and visit towns and villages nearby, it will be a full day.
​
Back in Bad Gastien, round off your visit with a day of rest and relaxation at your resort, or soak in the town’s thermal waters at the Alpentherme, a spa with more than 36,000 square metres of saunas, steam rooms, relaxation areas and swimming pools, all filled with mineral-rich thermal water. 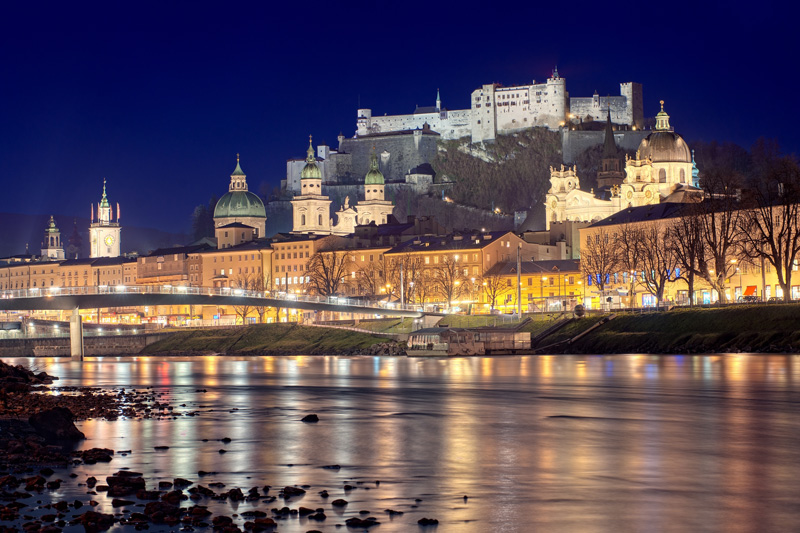 Fortress Hohensalzburg is one of the largest medieval castles in Europe and one of Salzberg's most beautiful attractions. It looks particularly spectacular at night,

A tale of two cities in France’s Loire

A city break by the sea married with French food and wine - what more could your mum ask for?

The Loire-Atlantique region certainly offers the best of all worlds for a Mother’s Day break, with the fascinating culture of Nantes, the coastal elegance of Saint-Nazaire and the delicious wines of the Loire Valley.

Nantes is a port town with a medieval centre and a host of historic buildings to explore. Start with an overview of the city from on high with drinks at bar Le Nid, or The Nest. The bar crowns the Tour Bretagne - the city’s only skyscraper - and from its outdoor viewing platform you can see across this historic city while enjoying a cocktail.

Once you have a sense of Nantes’ layout, hit its streets to see its buildings up close. Start among the turrets and spires of Château des Ducs de Bretagne, a castle located on the banks of the Loire River. The medieval castle is something of an oddity, starting as a 13th century castle built on top of the town’s Roman wall. But much of this was demolished in the 15th century to make way for the present building.

Nantes is a port town with a medieval centre and a host of historic buildings to explore. The Château des Ducs de Bretagne makes for a beautiful place for a wander.

Next it is time to head to the coast and Saint-Nazaire. The city is interesting with the Escal’Atlantic Museum, a life-sized reconstruction of an ocean liner, celebrating its shipbuilding past. Then there is Tumulus de Dissignac, an ancient burial mound with Neolithic rock carvings.

But in this corner of France, it is nature that plays the best hand. To the north of the city, canals criss-cross the salt marshes of Brière Regional Nature Park, France's second largest area of marshland. Here you can enjoy a canal ride on a chaland - a boat similar to a punt, or take time to spot the abundance of migrating bird life swooping across the landscape.

Yet more peaceful corners can be found back by the sea on one of Saint-Nazaire’s 20 beaches. There are celebrated blue flag beaches, gentle sheltered coves, and wild open stretches, which are perfect for surfing or simply spectating if you prefer. 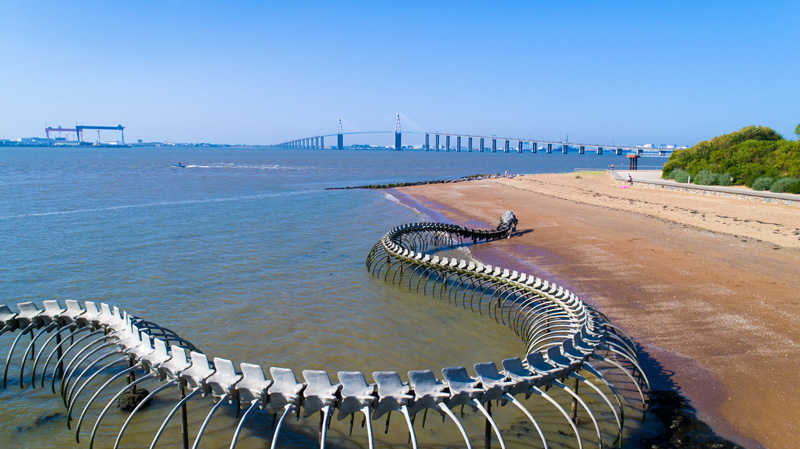 Saint-Nazaire is a beautiful seaside town and for beach lovers, there are 20 sandy shores to enjoy. Look out for the spectacular Serpent d'océan structure - it's quite a sight!

The castle, with its unusual architectural details, is fascinating in its own right, but it is also home to Nantes’ Urban History Museum where you can learn more of the region’s past. While Nantes’ gothic cathedral with its impressive nave is also worthy of your attention, the city’s big cultural draw is Machines of the Isle of Nantes - akin to stepping into a dream-like Steampunk Circus.

Housed in former shipyards, this fantastical attraction was created by two artists and features a range of giant structures. The main one, a 12-metre high, 45-ton mechanical wood and metal elephant, can take 45 people for a walk.

A taste for the unusual in Lanzarote

Lanzarote may be a well-known Canary Island, but it has some pretty unusual attractions that make it ideal for a trip with a few surprises.

First, you can be almost certain of spring sunshine, as the island has average temperatures of 21°C in March.

But on arrival to the island you will be struck by its strange landscape. Its volcanic past has resulted in an island not just having a mountainous interior, but strange land formations, and even flowerbeds filled with black volcanic lava pellets instead of soil. It’s this volcanic heart that has created some of the most dramatic scenery and attractions in Europe. Lanzarote’s most famous son, sculptor Cesár Manrique, created masterpieces all over the island which merge with the landscape.

Once you’ve had a day to enjoy the sun on one of Lanzarote’s beaches - I’d recommend the long golden sands of Puerto del Carmen for a fly and flop option, as it's close to a lot of accommodation. But perhaps Lanzarote’s prettiest beach, Playa Papagayo, takes a little more effort to get to. Still, what is life without a bit of adventure? To reach these spectacular sands fringed by turquoise seas you need to drive around three miles along a dirt road from the Playa Blanca area. From the car park, walk down the cliffs - a moderately difficult walk - and you’ll soon be enjoying one of Lanzarote’s most treasured spots. If the walk back up takes your breath away, there is a restaurant at the top with divine sea views. 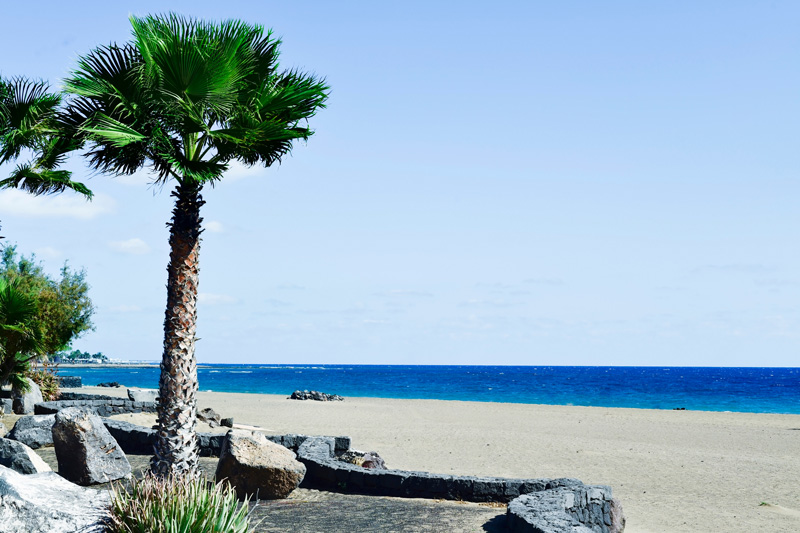 The long, golden sands of Puerto del Carmen are perfect for a day lazing on the beach. Framed by endless restaurants, bars and shops, there is also lots to do when you need a break from the sizzling sun.

Further along the coast, sample the first of Lanzarote’s unusual treasures at Los Hervidores - a spectacular landscape of twisting, gnarly black rocks on the coast between Salinas de Janubio and El Golfo. Many of the cliff-side areas here provide mesmerising viewing points of the swirling Atlantic Ocean.

At the end of the cliffs you will find yourself at another striking beach, but this one is not for bathing. The waves that crash in at El Golfo are set against a small emerald-green pond - a colour that comes from the algae in the water - while behind that there are cliffs of textured volcanic rock in russet and burnt black. The area was the famous backdrop for Raquel Welch in her fur bikini in an iconic publicity still taken from the film One Million Years BC and is still attracting keen photographers today. 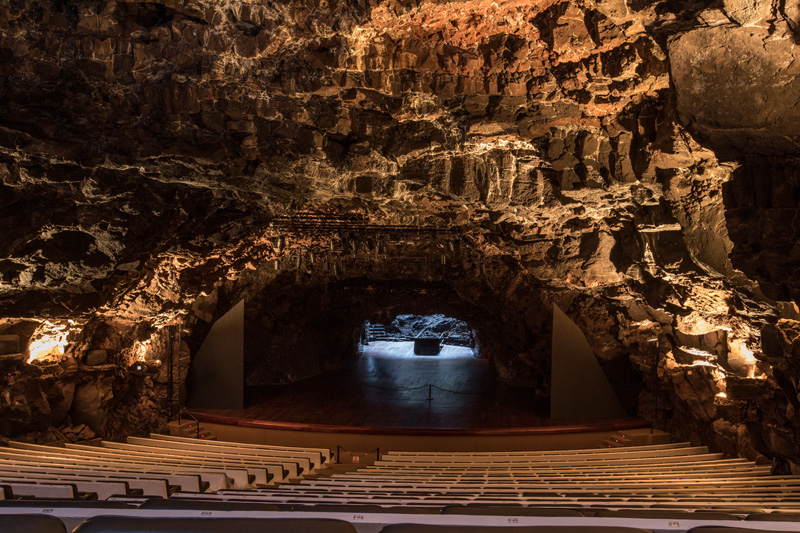 Be sure to visit Jameos del Agua, a volcanic tunnel turned into a concert space; and Cesár Manrique's former home.

Lanzarote is an island not only for nature lovers, but also for those passionate about art. Here, Lanzarote’s most famous son, sculptor Cesár Manrique, created masterpieces which merge with the landscape. These evocative creations have transformed the built environment. Be sure to visit Jameos del Agua, a volcanic tunnel turned into a concert space, and the artist's former home which has now become the César Manrique Foundation - carved from Lanzarote’s lava. Visit Mirador del Rio for endless views of the ocean and the neighbouring island of La Graciosa.

Before you leave, take your mum for a tipple in Lanzarote’s La Geria wine region. It’s famed for its fresh, young wines as much as its lunar landscape, where vines grow in individual semi-circular cinder holes.

It may be too late to jet off with your mum for this Mother's Day, but you can start planning now, for later this year or next...

If you are a member of RCI and would like to visit the beautiful island of Lanzarote, then click on the Resort Directory button below and start your holiday search.

If you own timeshare but are not a member of RCI, you can join our Holiday Exchange community by clicking the Join RCI button below and signing up in a few simple steps.

Get Away This Mother's Day