Easter Festivals Around The World

Even if you’re not religious, or adhere to a different faith, Easter is a fascinating time to experience the traditions and festivities of countries where the Roman Catholic faith plays a big part. 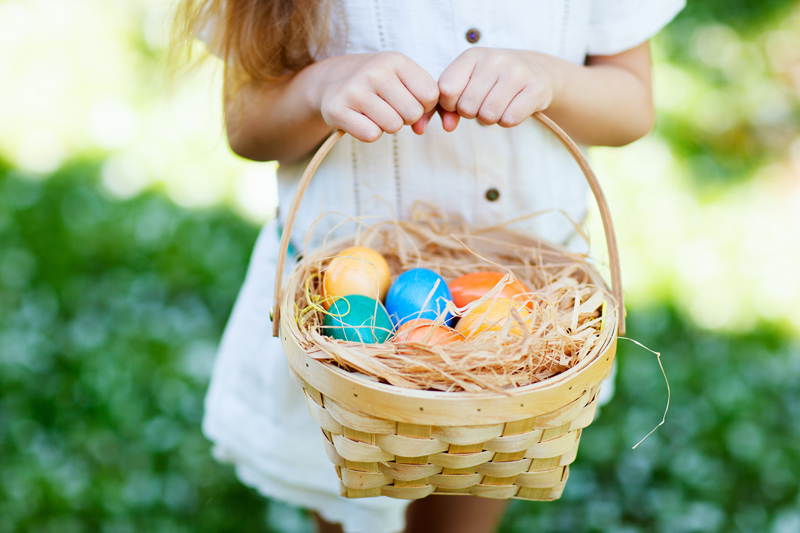 It doesn't matter whether you're religious or not, everyone loves the colour and joy of an Easter festival.

The celebrations of Holy Week - which runs from Palm Sunday to Easter Sunday - commemorate the passion, death and resurrection of Jesus Christ, and involve festivals, processions, passion plays, marches, and much more.

There are, inevitably, some spiritual and sombre occasions, but many of the events are dramatic, colourful, and in some cases exciting, making them a wonderful way to fully experience your sunny spring holiday destination. 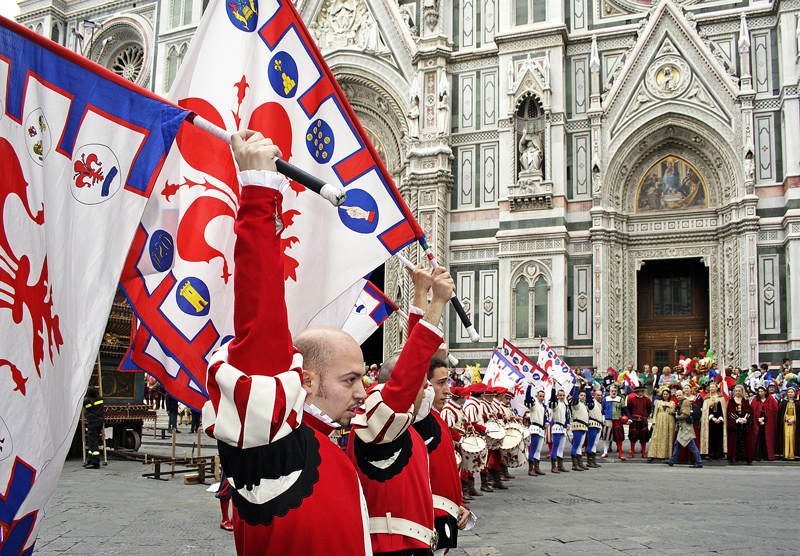 One of the biggest Good Friday parades takes place in the Sicilian town of Enna, where more than 2,000 friars dressed in ancient costumes parade through the streets of the city.

Easter celebrations in Italy range from the sombre to the truly spectacular, and despite it being a very religious country being home to the Roman Catholic faith in Vatican City, some of the celebrations aren’t exactly spiritual, as you’ll soon find out!

But before that, it’s worth pointing out that Easter is one of Italy’s biggest and most important holidays, and while Rome’s Vatican City is an obvious focal point for visitors during Holy Week, there are religious processions, festivals and services all over the country.

One of the biggest Good Friday parades takes place in the Sicilian town of Enna, where more than 2,000 friars dressed in ancient costumes parade through the streets of the city. Lasting 24 hours, the Good Friday procession in Trapani, also in Sicily, is a feat (or should that be feet?) of endurance, while Chieti hosts the country’s oldest procession, accompanied by the wondrous sound of Secchi’s Miserere played by 100 violins.

If you’re in Rome for Easter then you can witness the Pope celebrating the ‘Via Crucis’ or Stations of the Cross, near the Colosseum on Good Friday - a stunning occasion featuring a huge cross with burning torches. While on Easter Sunday, the Pontiff celebrates mass at St Peter’s Basilica. Tickets for the event are free but you need to book in advance. 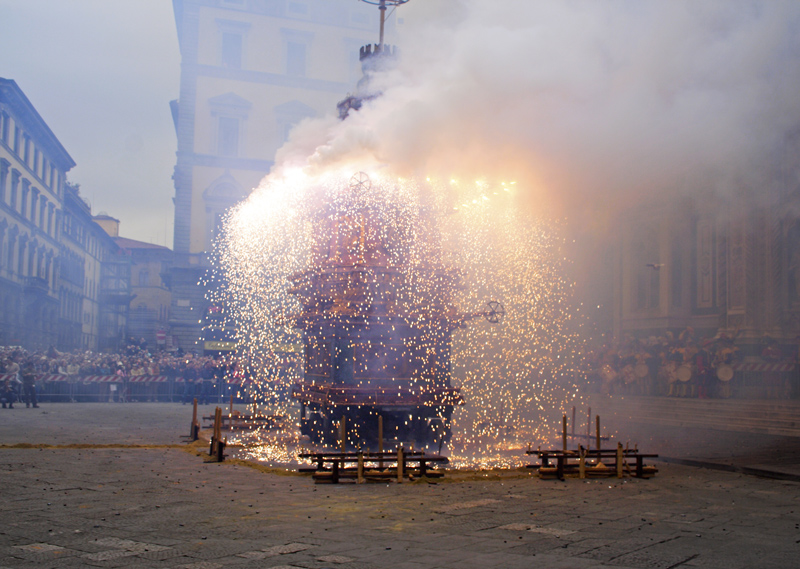 Easter celebrations in Italy range from the sombre to the truly spectacular, with the Explosion of the Cart one of the most impressive.

Easter services take place all over the country of course, so if you can’t see the Pope in Rome then even non-religious visitors are likely to enjoy the charm of a small village church ceremony.

And if that sounds somewhat quaint and laidback, then the Easter celebrations in Florence are rather more incendiary - in every sense of the word! Here they enjoy the 500-year-old tradition known as ‘Scoppio del Carro’, or ‘Explosion of the Cart’. This involves (and I’m not making this up) a dove-shaped rocket, lit with ‘holy fire’ flying (on a zip wire) out of the Duomo after the Easter services, before hitting, and igniting, an ornately-decorated wooden cart filled with fireworks to create a fabulous pyrotechnic display. Oh, and there are drummers and medieval-style flag throwers in the mix too, for what sounds like a quite mad, but also quite incredible spectacle. 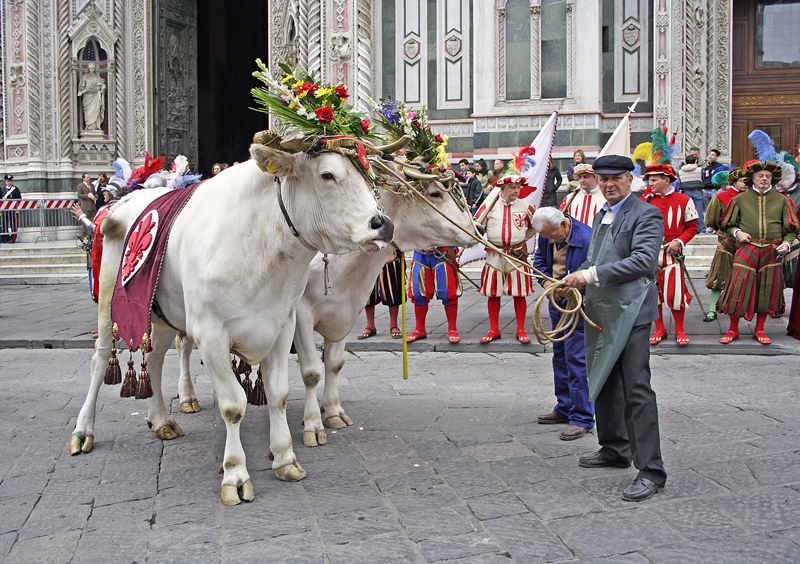 Easter is one of the most important events in Italy's religious calendar. Florence has some of the most interesting Easter traditions of all the country.

Easter is a fabulous time to visit Malta, with a range of colourful celebrations to enjoy in a country where an incredible 98 per cent of the population are Roman Catholics.

Easter is their most important religious festival, and Holy Week features a range of processions, pilgrimages, bell ringing, pageants and more, with most of the island’s towns and villages taking part. Some villages even have drama groups created solely to produce shows for the occasion. 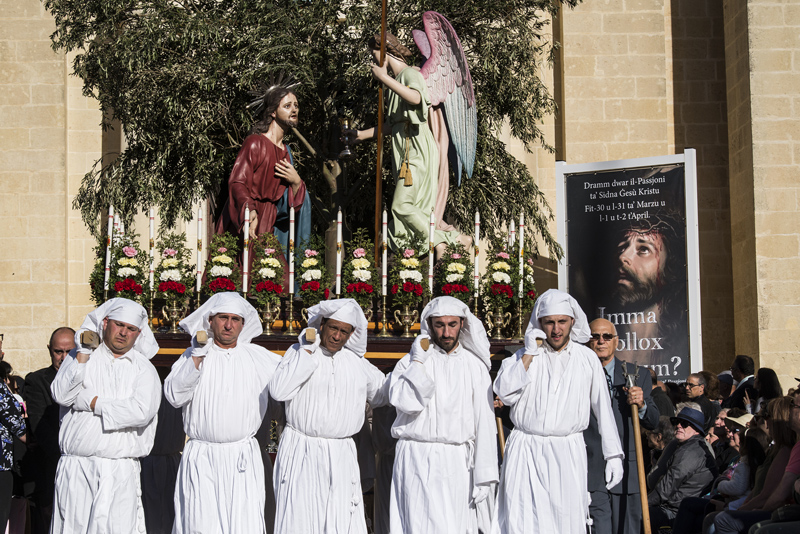 There are more processions on Good Friday, as towns and villages commemorate the occasion with a parade of statues, each depicting the passion and death of Christ.

Events kick off on the Friday preceding Good Friday, when a statue of Our Lady of Sorrows is carried in a procession through the streets of the capital, Valletta, and many other towns and villages.

Maundy Thursday sees the traditional washing of the feet - 12 people represent the 12 apostles - during mass, and after the service Maltese families take part in the ‘Seba Visti’, or Seven Visits, during which they visit seven different churches to say prayers in each. The trip is usually combined with visits to numerous exhibitions depicting the Last Supper, ranging from model displays to paintings made from rice and pasta.

Another popular event is a torch-lit procession in Girgenti in the south west of the country, where pilgrims walk up Girgenti Hill to the summit at Laferla Cross.

There are more processions on Good Friday, as towns and villages commemorate the occasion with a parade of statues, each depicting the passion and death of Christ. Despite the solemn nature of the event, it is quite a spectacle as hundreds of participants dressed as Roman soldiers and biblical characters march to the sounds of brass bands. Some of the biggest processions are in Mosta, Birgu, Isla and Valletta, but the most extravagant is Żebbuġ, where horses join the parade. 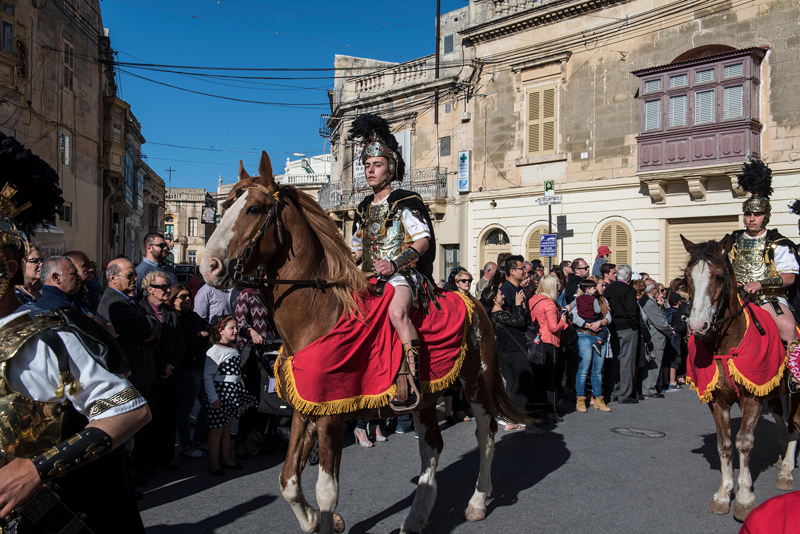 Some of the biggest processions are in Mosta, Birgu, Isla and Valletta, but the most extravagant is Zebbug, where horses join the parade.

The processions on Easter Sunday are much more of a celebration as statues of the risen Christ are paraded to the sound of chiming church bells and lively marching bands. And things take on an almost Olympian aspect in the harbour towns of Vittoriosa, Senglea and Cospicua, where men dash uphill carrying the statue before racing back down to the church.

Easter is a time of deep Catholic significance all over Portugal, and Holy Week (‘Semana Santa’) is celebrated with a range of religious processions, pilgrimages and festivities.

The city of Braga, in the far north of the country, is known as the Portuguese Rome, and is a wonderful place to be over Easter, with many of its streets decorated with Easter motifs, and street altars known as ‘passos’ adorned with flowers and lights. 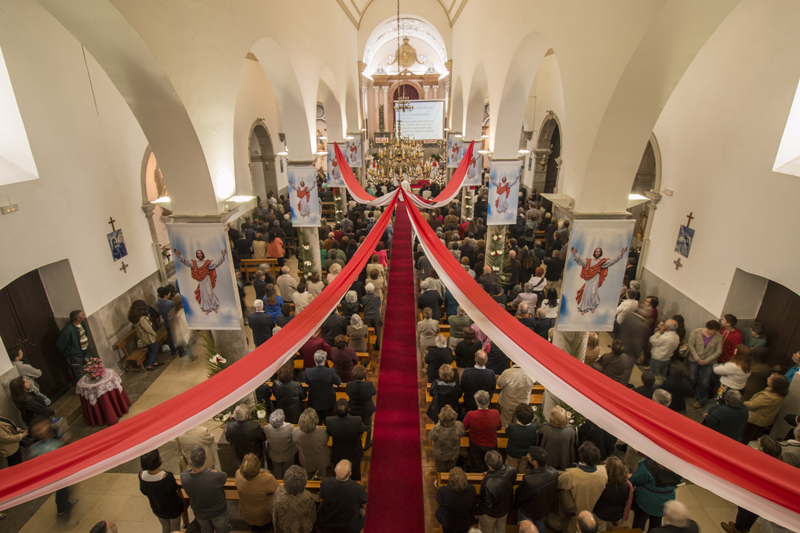 A church in the town of Sao Bras de Alportel where a traditional religious procession takes place.

On Maundy Thursday the Archbishop conducts the ceremonial washing of the feet, and there’s an eerie candlelit procession called the Ecce Homo. On Good Friday there’s the even more solemn Burial Procession of Our Lord, which is led by barefoot penitents dressed in hooded purple tunics and carrying torches - a fascinating, almost medieval sight.

In Porto, a few miles south, the Easter festivities embrace a cheerier theme, with Easter egg workshops, performances and concerts, as well as more conventional processions and religious readings. 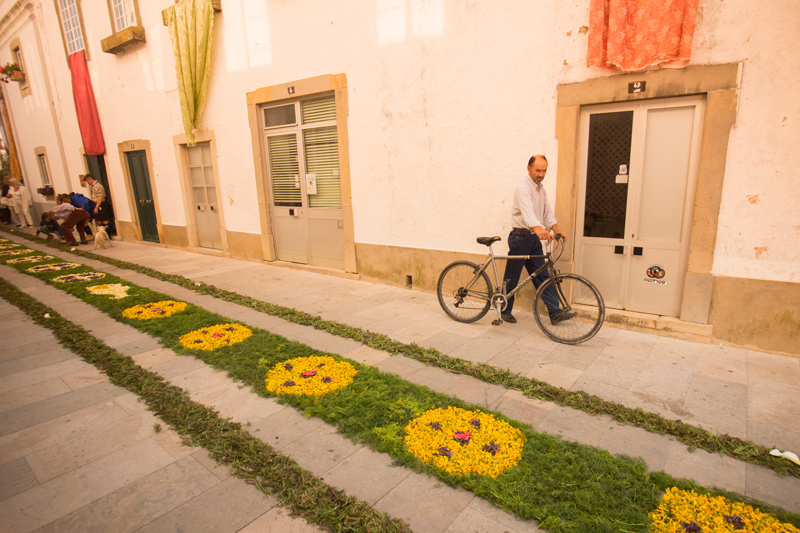 On Easter Sunday In Sao Bras de Alportel, in the Algarve, the streets are filled with flowers and flaming torches, as part of the Procession of the Resurrection.

There’s a similar mix in São Brás de Alportel, in the Algarve, where Easter Sunday sees the streets filled with flowers and flaming torches as part of the Procession of the Resurrection. The Algarve market town of Loulé also hosts the Festa da Mãe Soberana (Sovereign Mother), one of the largest religious festivals in Portugal, which kicks off with an orchestra-led procession known as Festa Pequena on Easter Sunday, and culminates in an even more spectacular version 15 days later for Festa Grande, which draws visitors from all over the region.

Similarly colourful processions take place in a number of other towns and cities, with many homeowners along the routes hanging colourful quilts and shawls from their windows and balconies to greet the procession.

As in Italy the celebrations also take an unlikely pyrotechnic turn, as the residents of Porto celebrate Easter Sunday by burning effigies of Judas near the city’s cathedral.

If you would like to visit Malta, Italy or Portugal, RCI has plenty of accommodation options. Click on the Resort Directory button below and start your search.

If you own timeshare but are not a member of RCI, you could become part of our holiday exchange community today and widen your holiday horizons. Click on the Join RCI button below and sign up in a few simple steps.