We fell in love with Austria during our search for a wedding venue. Austria and its exquisitely pretty alpine landscape is most definitely our happy place now - we love everything about it, from its mountain magic to its impressive gastronomy offering so many delicious dining treats and alpine beverages. Whether summer or winter, we make sure Salzburgerland is on our holiday calendar each year.

It was a school trip which first introduced me to the delights of alpine life in Austria. Little did I know then, that Austria would be the place where my partner, JB, and myself would 'tie the knot', and that it would become our second home.

JB and I have always been big fans of a ski holiday and, after experiencing much of what the French Alps had to offer, we migrated over to the Austrian Alps for our ski fix each year. But it was during a four-day road trip in the Gastein Valley in what is known as Salzburgerland, to research wedding venues, that we totally fell in love with the place.

The more time we spent there, the more we came to see that there is so much more to Austria than the fabulous ski experience it offers. 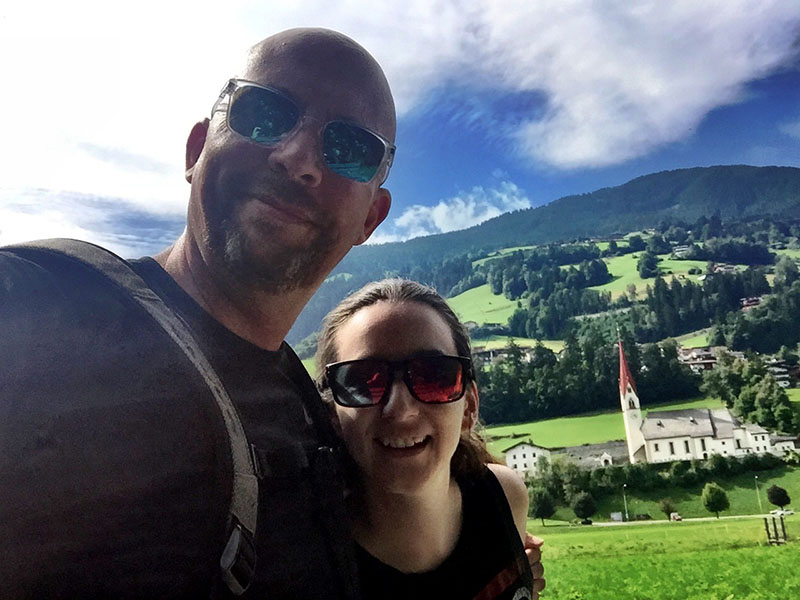 Shelley and her husband, JB, in their 'happy place', high in the Austrian hills.

Once in Salzburg, hire a car for the prettiest 75-minute drive of your life, along the A10, which gently winds up through the literally breathtaking alpine landscape of the beautiful Bad Gastein Valley. Each time I return to this, our 'happy place', I feel so excited as the valley embraces us. The resort of Bad Gastein itself is nestled up high, in a steep gorge. It is quite simply one of the most beautiful places on earth, with its ornate Belle Époque architecture and a magnificent, sparkling 'wasserfall' which cascades down through the town itself!

If you asked me to describe how being in Austria makes me feel, words such as peace and oneness spring to mind. I was once asked where I felt most confident; in a heartbeat I answered: "On top of a hill in Austria". 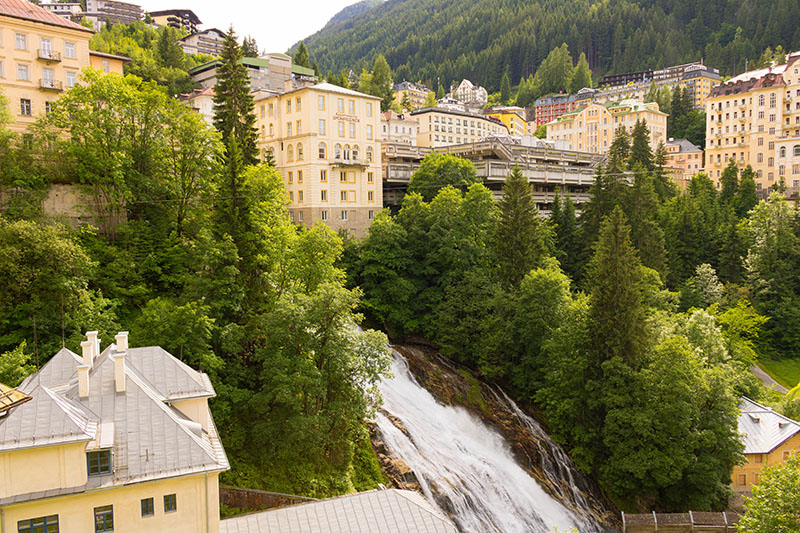 The wasserfall cutting through the steep town of Bad Gastein is a real showstopper for visitors. 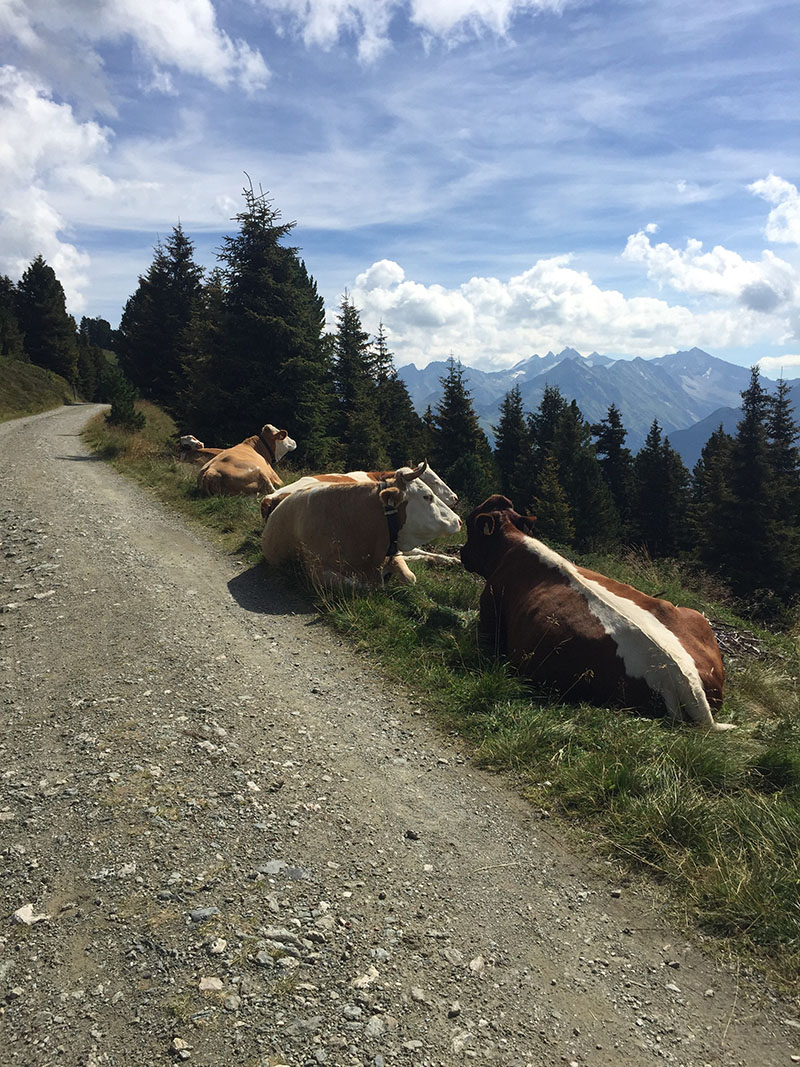 The charm of Austria's alpine roads - you may find yourself sharing the road with some unlikely travellers!

The drive from Salzburg on the A10, up into the hills and valleys, is amazing. Film buffs will be thrilled to see the Hohenwerfen Castle - the location of the 1968 film, Where Eagles Dare. It was also where the cameras rolled for Just Married, a 2003 rom com starring Ashton Kutcher and, more recently, the Amazon video series, The Man In A High Castle, being perfectly perched on a rocky precipice, overlooking the market town of Werfen in the Salzach Valley. And, of course, it makes an appearance in the classic movie, The Sound Of Music, featuring in the background of Julie Andrews' 'Do-Re-Mi' picnic scene.

It is worth mentioning that access to the hills of the Gastein Valley from Salzburg is very easy. If you don't want to go the car hire route, there are many bus rides up into the valley, as well as a range of guided tours. 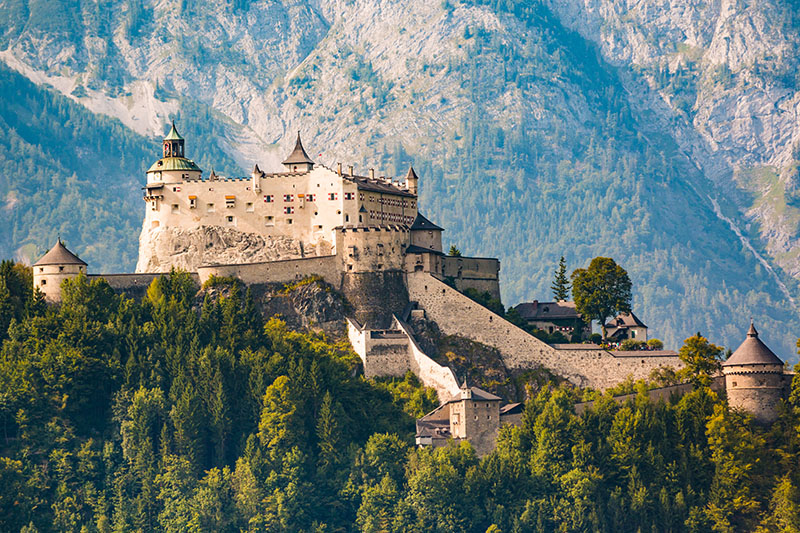 Hohenwerfen Castle, on its rocky perch, is now a star of the silver screen, with many film credits to its name. This Medieval castle is just 25 miles out of Salzburg.

Further down the A10 you come to Bischofshofen, which any ski buff would recognise as a key location of the finale of the international Four Hills ski-jump tournament. As you make your way through the Bad Gastein Valley - home to the perfectly situated Ferienclub Bellevue - Mondi (3713) resort - you pass through the pretty little ski and spa towns of Dorfgastein and Bad Hofgastein. Bad Hofgastein holds a very special place in our hearts as the place we chose to get married in 2008. 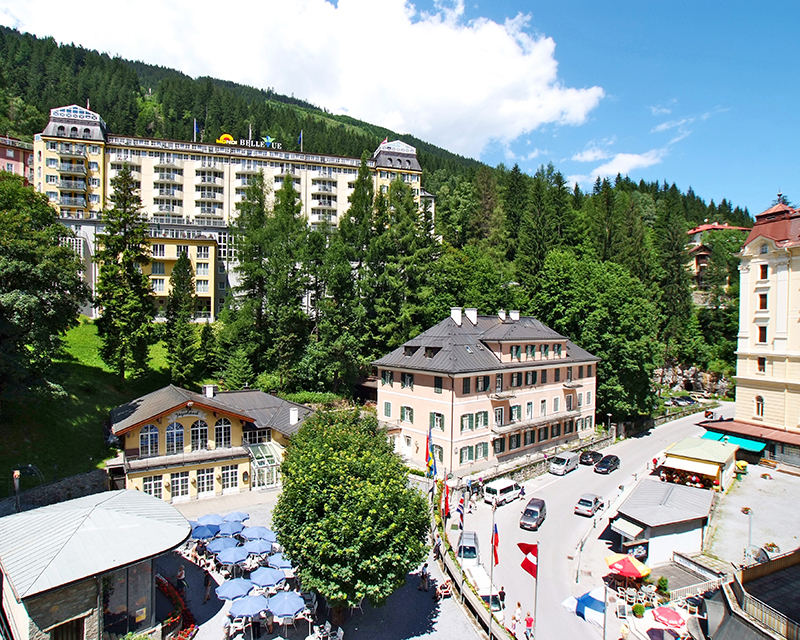 Mondi Holiday has signed up many of its resorts to the RCI timeshare exchange holiday programme, allowing RCI members to live and love the Austrian alpine lifestyle. Pictured is Ferienclub Bellevue - Mondi (3713) in the beautiful Bad Gastein Valley. 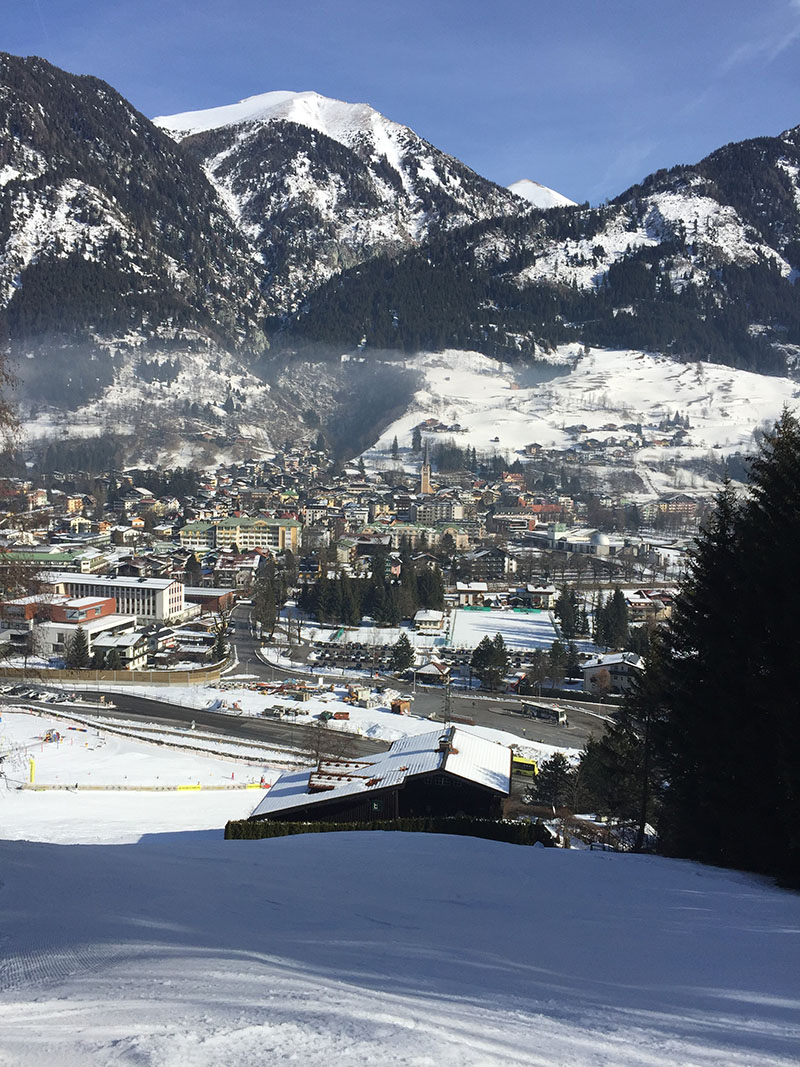 This area is known for its spa and wellness experiences - perfect after a hilltop hike or an exhilarating day whizzing down the slopes on your skis! In Dorfgastein, for example, you can drift into gentle relaxation in thermal waters of 28 to 30 degrees centigrade, there are steam baths, bio saunas, Finnish saunas, infrared saunas, with all kinds of scented and themed infusions to indulge in - an especially rejuvenating experience in the winter months. 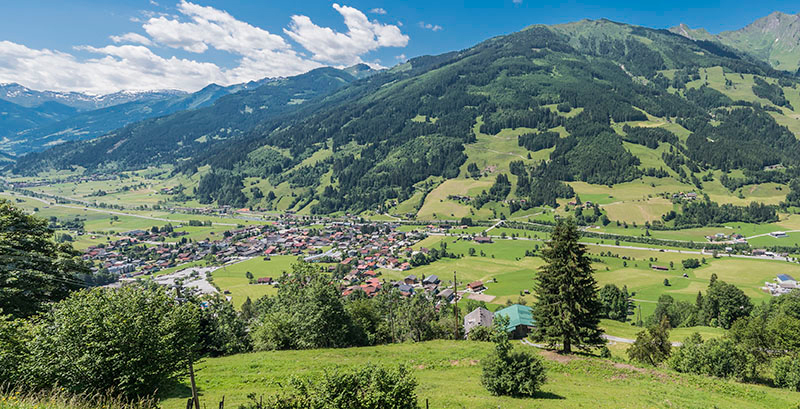 The spa town of Dorfgastein - one of many spa centres in the Austrian Gastein Valley.

Whether you visit Austria, the Gastein Valley, or any other alpine village, in the summer or the winter, one thing that doesn't change with the seasons is the delicious food. In a destination that loves its meat dishes, I was impressed to discover that the Austrian cuisine also catered handsomely for vegetarians like myself!

The Aeroplanstadl, which sits on the H2 slopes above Bad Hofgastein, is well worth a visit. This restaurant is loved by the locals - always a good sign I think. It's a large establishment, just minutes away from the Gasteiner cable cars' mid-station, and seats hundreds of guests, but it has the room and the location to carry this off well. Surrounded by natural beauty on a scale you can't possibly imagine, the restaurant's large sun terrace is a must. It is also a place to party during the ski season, being renowned for its après ski disco. The Schock family own and run the restaurant, and they take great pride in serving up the tastiest traditional dishes. 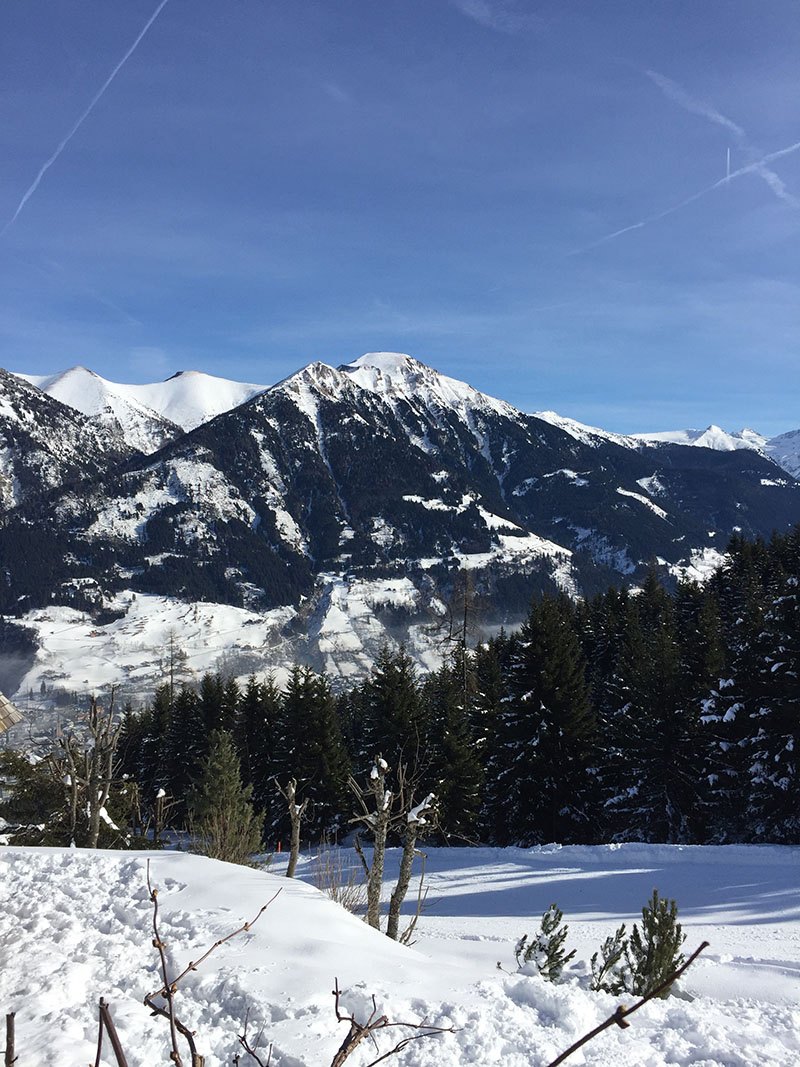 The view from the Aeroplanstadl restaurant.

Once I've bagged a great table with a view to die for, browsing the menu at Aeroplanstadl is a treat in itself. My favourite dishes here are many. A particular favourite, however, is its gemüselaibchen - small vegetable patties served with a salad. Austrian speciality, kase spaetzle is another mouth-watering meal, being a little like macaroni cheese and was actually the veggie food option at our wedding!

While at the Stubneralm Ski Hut in Bad Hofgastein, meat eaters can't go wrong with the wiener schnitzel or wurst - the traditional Austrian savoury sausage. An unusual and delectable spin on the wiener schnitzel was the käsekrainer - 120g of soft cheese stuffed inside a smoked sausage. 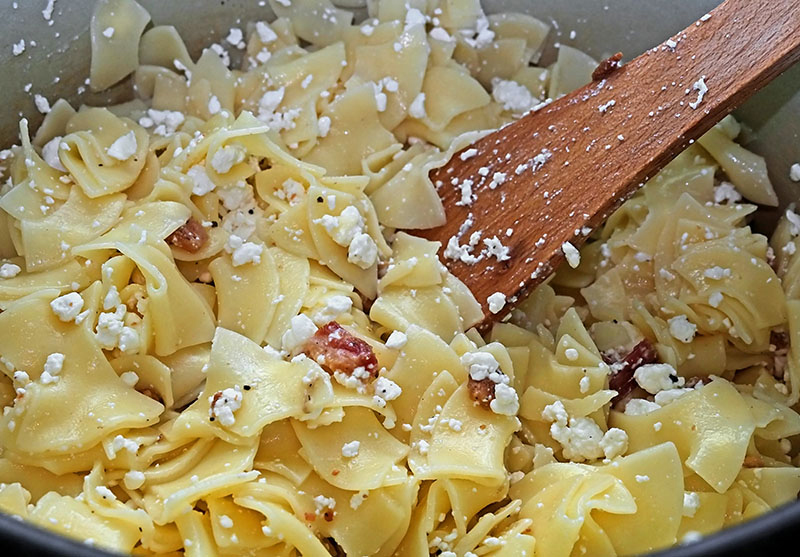 Kase Spaetzle, a traditional Austrian dish, the vegetarian option of which was served at Shelley's Bad Hofgastein wedding. 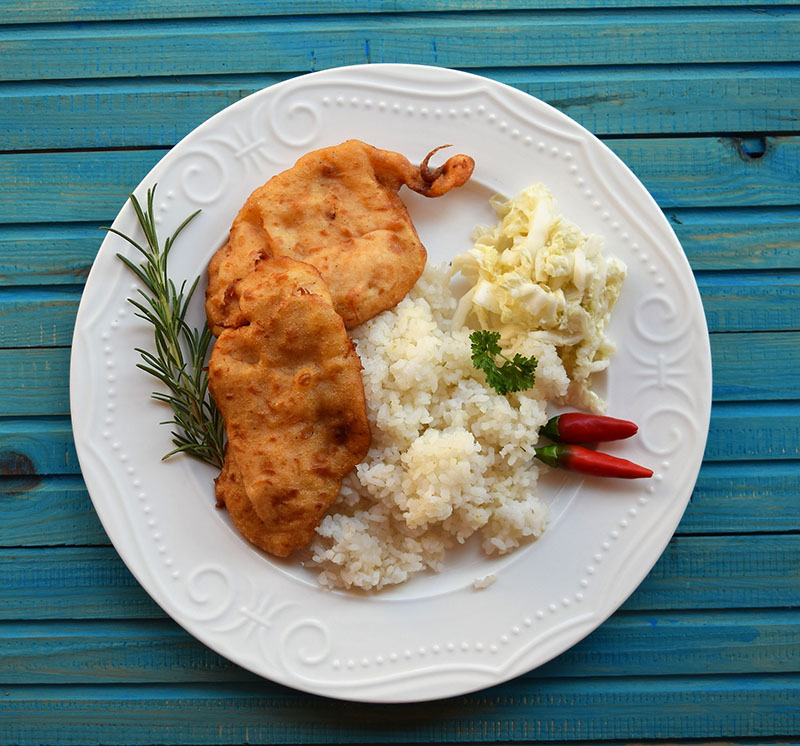 The iconic Austrian wiener schnitzel, or wurst, is a must at the Christmas fairs in the UK - but an every-day favourite in Austria.

Don't forget to save some room for the desserts! They are especially finger-licking good in Austria. Again, from the Stubneralm Ski Hut, I'd call out the ever-popular Apfelstrudel, a juicy apple pastry, the first recipe for which dates back to 1696, so it's been around a while... Austrian cuisine is influenced by many European countries and the strudel's Viennese pastry originated from the Ottoman Empire's baklava pastry, coming to Austria from Turkey, via Hungarian cuisine. 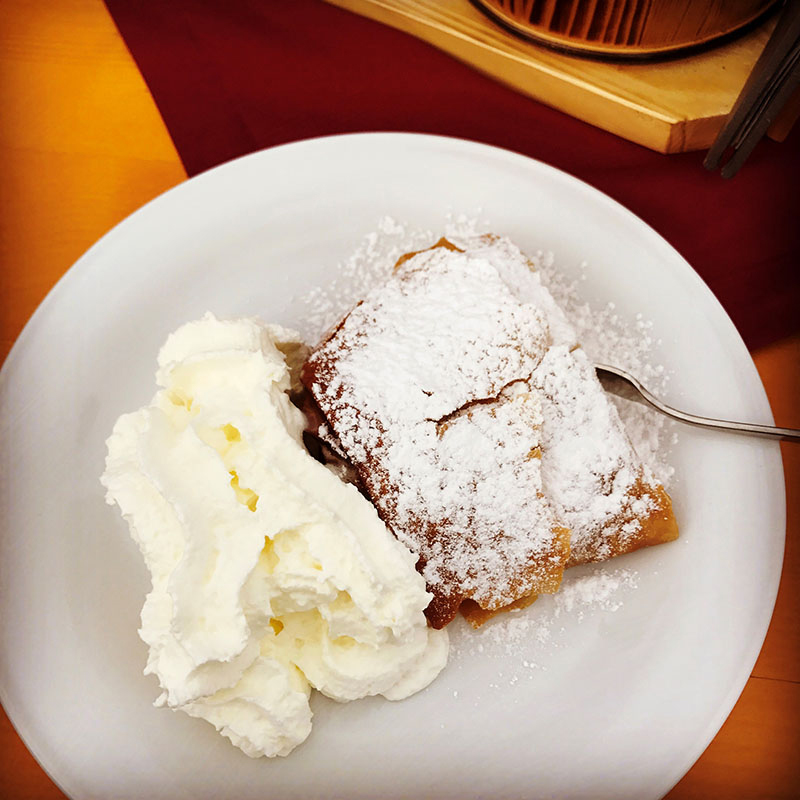 Austria's famous Apfelstrudel - an apple pastry dessert dating back to the days of the Ottoman Empire.

Other sweets deserving of a mention are kaiserschmarrn - a shredded caramelised pancake which, like a lot of the food in Austria, has a heritage as rich as its flavour. Kaiserschmarrn (meaning the emperor's mess), takes its name from Austrian Emperor, Kaiser Franz Joseph 1, who was fond of these fluffy parcels of sweetness. It is still a firm favourite across the region that used to be the Habsburg Empire, in countries such as Hungary, Slovenia and Croatia. 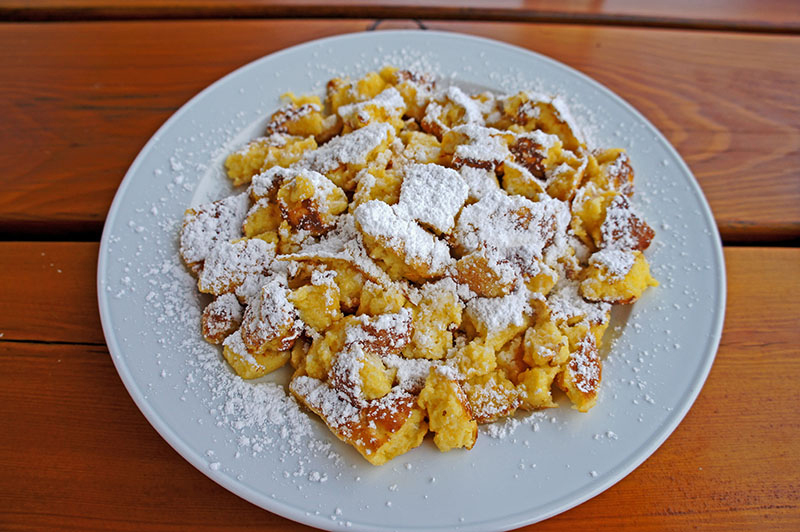 Kaiserschmarrn - the food of Austrian emperors and a personal favourite of Shelley.

Germknödel may not look so appetizing, but don't judge this pudding book by its cover... This odd-looking yeasty dough dome is actually very light and fluffy, and the best bit - bursting with spiced plum jam. Traditionally served with a topping of poppy seeds and sugar in a pool of melted butter, you can order it with a side of the somewhat less traditional vanilla cream sauce. 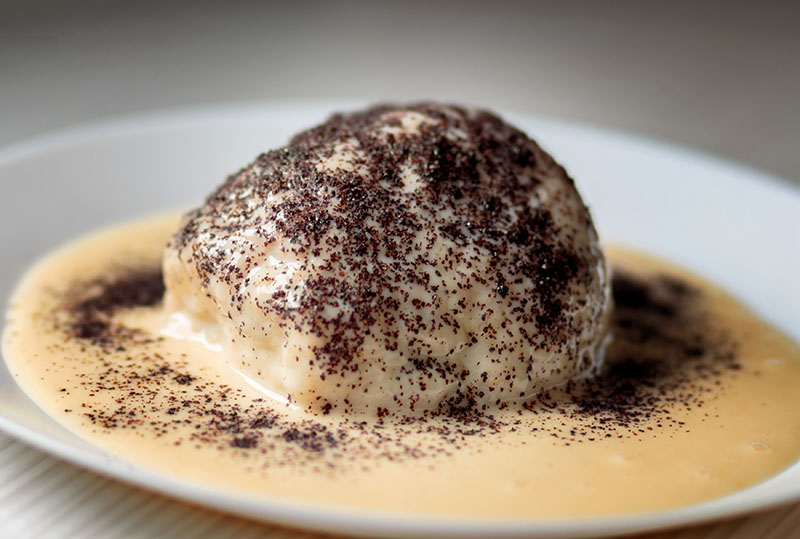 The 'tardis' of desserts - germknödel, the odd little package that packs a spicy plum punch.

JB and I, though loving the fruity Pinot Noir, now found in all Austrian wine-growing regions, will often reach for the Stiegl beer as a refreshing accompaniment to our Austrian alpine dining experience. Stiegl, like all Austrian and other Bavarian beers, is made as it has been for more than 500 years, with strict adherence to the 'Bavarian Purity Law' which stipulates it should be brewed using nothing other than barley, hops and water.

So here's to our next fabulous Austrian Alpine adventure. Prost!

To see where RCI is taking its members on their Austrian alpine adventures, check out the online RCI Resort Directory.

If you own timeshare and want to join the RCI member community, enjoying access to more than 4,000 holiday resorts around the world, using the button below you can join RCI in just a few simple steps...