Top 5 Things To Do In Barcelona

During my university course I took an amazing trip to Barcelona. Yes, it was for educational purposes, but I didn't expect to fall in love with this Spanish city as much as I did. In this blog, I'd love to share my top five favourite things to do while staying in Barcelona.

Let's start with the city's hugely impressive basilica, the Sagrada Família. This iconic building has been under construction for 137 years and isn't set to be completed until 2026. It was designed by Catalan architect, Antoni Gaudí, who had a specific inspiration for his design which took him back to his childhood. As a sickly child, his mother believed he needed to spend much time outside among nature for the good of his health. In his design for the basilica, he wanted to bring the outside inside, and to commemorate his childhood adventures in the forests, as well as celebrating nature, which vision he certainly achieved.

The intricate stonework is beautiful and definitely picture-worthy. The basilica is impressive from all angles, being richly decorated on the inside too. Huge, tree-like pillars reach up to the ceiling, their branches reaching out to support the roof in a way that will make you gaze in awe. Stunning stained-glass windows light the interior of the cathedral, with each individual area symbolising Catalan and Spanish dioceses. 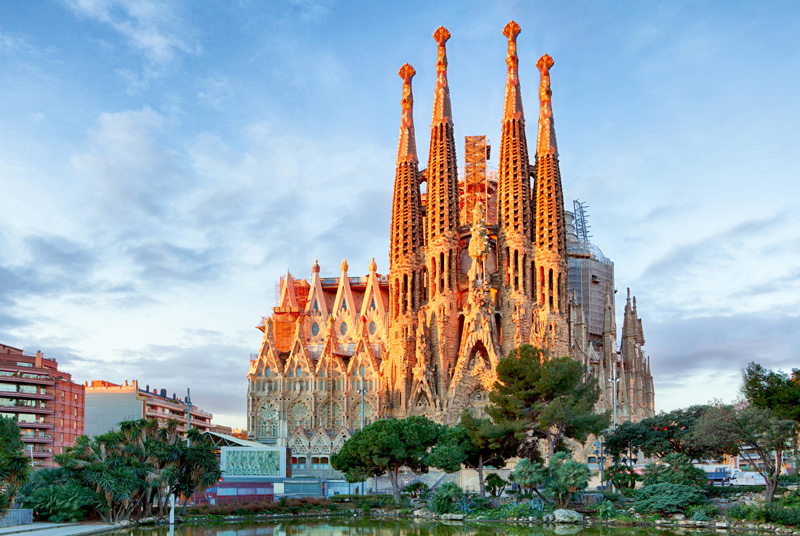 Antoni Gaudí really made a mark on the city, especially with his design for the Sagrada Família. Building of this basilica was started in 1882 and is actually still ongoing now.

If it's stunning views and fascinating ancient Spanish culture you are interested in, this is the one for you. The Monistrol de Montserrat sits right up in the mountains of Esparreguera, just a short train ride away from Catalonia.

I was privileged to see some of the most beautiful views I have ever seen in my life on this visit to the Monistrol de Montserrat. With clear blue skies, I could see for miles across the city. Gazing down at the towns below and up at the mountains around me in a picture-perfect landscape was simply breathtaking. I will definitely be returning one day to see it all again. 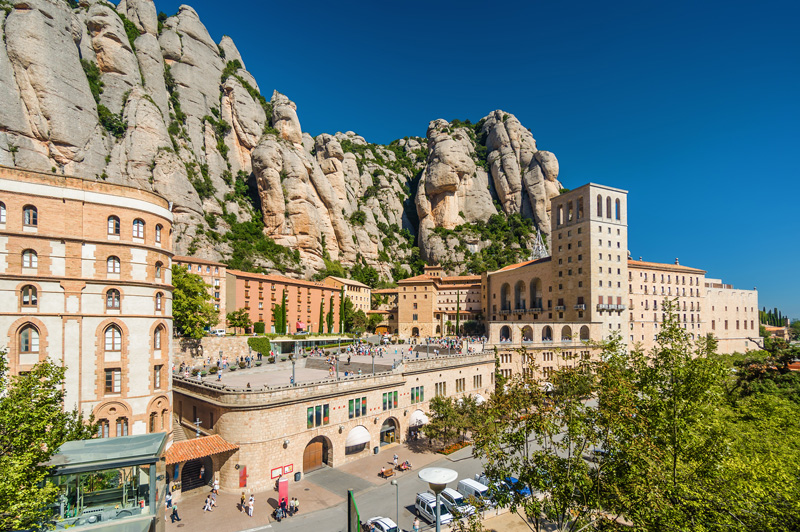 The Monistrol de Montserrat is built into the towering mountains of Esparreguera and is a really fascinating place to explore, as well as from which to survey the towns below.

As well as enjoying the impressive views, I explored the monastery, which is a must-see. The intricate details of architraves, bas-relief artwork carved into the stone, and beautiful mosaics are stunning. Inside, you can see the statue of the famous Virgin of Montserrat - one of the Black Madonnas of Europe - and one of the most celebrated icons in Spain.

There is no shortage of colour inside, as detailed stained-glass windows are found around the building streaming every shade and colour of light onto every surface of the monastery. 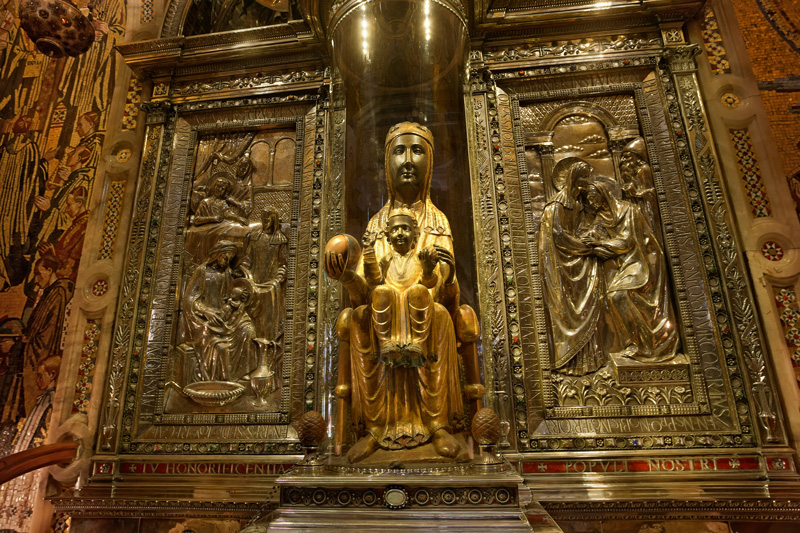 The Santa Maria de Montserrat Abbey is still in use today, having over 70 monks in residence. The main attraction is the statue of the Black Madonna - the patron saint of Catalonia.

As well as France, Barcelona, too, has its own Arc de Triomf. It is an impressive monument. Personally, I thought there was something magical about it. I was overwhelmed by its beauty as I walked under it, taking in every inch of its intricate detail. They say a picture is worth a thousand words, well, seeing this amazing historic structure certainly left me lost for words when viewing it for real. It made the perfect backdrop for a photo opportunity under the bright Spanish sun.

The next thing on my list of favourite things to do in Barcelona, is to visit Park Grüell, another of Gaudí's projects. It's situated on Carmel Hill, up in the mountains looking down on the lively city below. It has wondrous walks and picture-perfect views, so there can be no missing it out on this spectacle during your trip to Barcelona. 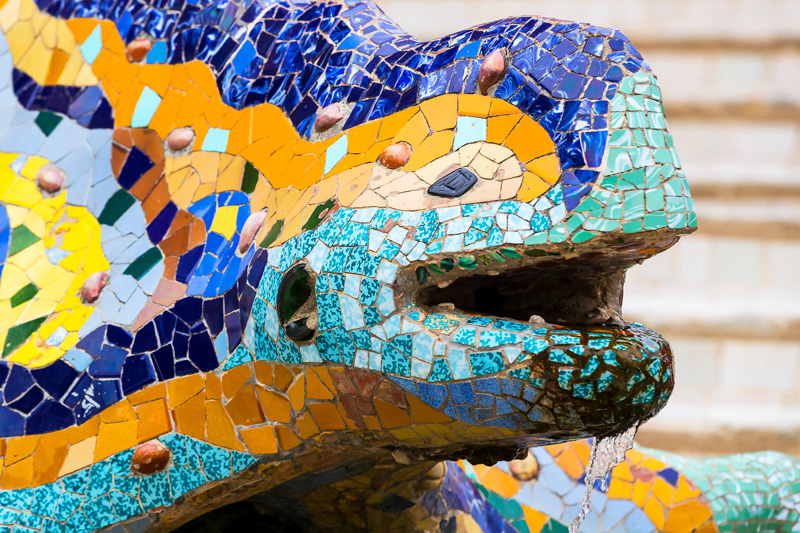 Park Güell is filled with beautiful stone work. One of the highlights is the Gaudí Dragon Fountain, which is covered with colourful mosaic tiles.

I wanted to learn more about the city, so I visited Gaudí's house, which has been converted into a mini-museum. There a lot of information in there about the Sagrada Família, as well as a small model of the finished design of the cathedral.

There is plenty to do and see in the Park. The surrounding wall is made of stone and topped with colourful ceramic tiling, which looks very dramatic against the lush greenery of the gardens. The Dragon Stairway and the Greek Theatre are both interesting sights to see while wandering around the Park..

If you have an hour to spare, taking a guided tour is the perfect way to see all the main features of the Park. So many people from all over the world visit Park Grüell which means the tours are offered in several different languages, making it easier for tourists to learn all about the fascinating features in their preferred language. 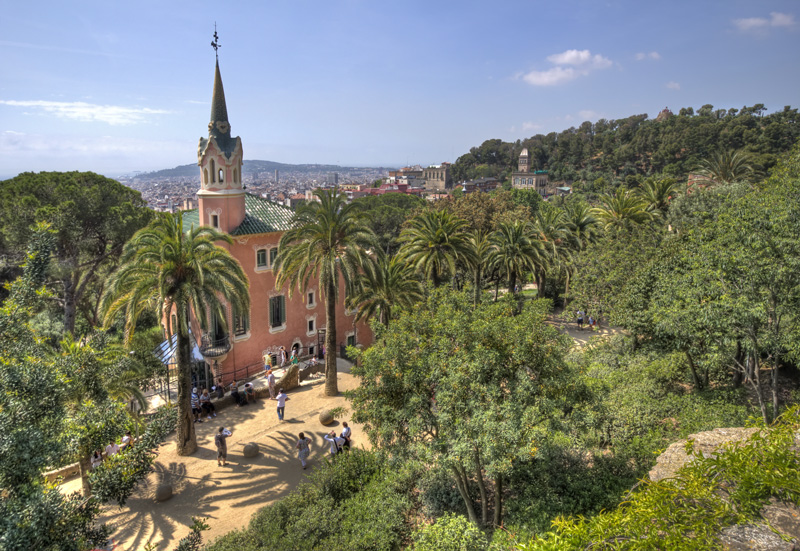 The Gaudí House Museum sits within the Park Güell and was the architect's home. It is now open to the public and is filled with items which he designed, as well as some of his own personal belongings.

Last, but certainly not least, I find that walking around the city is the best way to get a real feel for the Spanish city culture and to appreciate the beautiful architecture. There are plenty of great photograph opportunities, with the small cobbled streets and the interesting brickwork making the perfect backdrop to any picture, so be sure to take your camera.

The differences between the houses and the shops along each street as you get closer to the beach in Barcelona is fascinating. The buildings become more decorative the closer to the seafront you get, but both areas of the city are as equally enthralling as the other. And there aren't many sophisticated cities which are fringed by a beautiful beach! 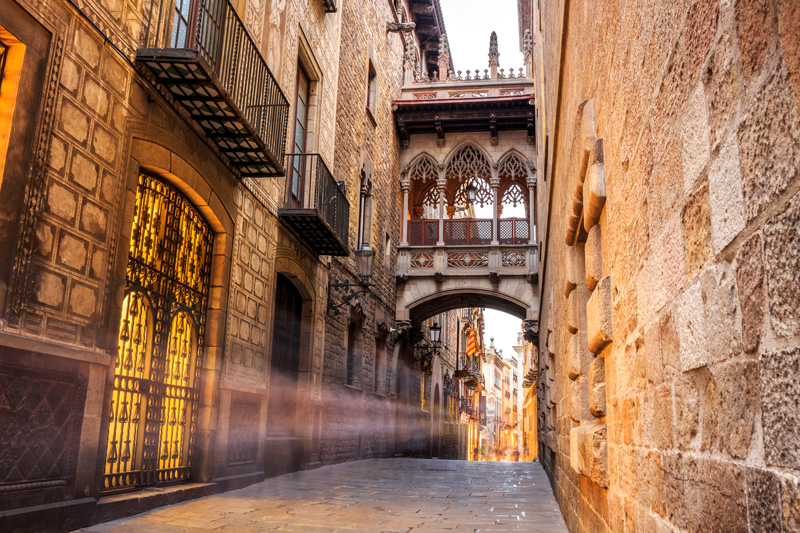 Barcelona's streets are full of beautiful architecture, interesting buildings and history are everywhere you turn. The city has all the advantages of a modern city, but has preserved so much of old Spain, that walking its streets is like stepping into a living museum.

Barcelona has a happy and exciting atmosphere, no matter where you find yourself exploring. It is a place where the little backstreets and markets are just as appealing as the famous landmarks, so go for a walk and get lost. The locals are very friendly too, and will point you in the right direction if you need some direction.

Overall, I couldn't recommend this city enough. I can't wait to return to see even more of it!

If you are a timeshare owner and not yet part of the RCI holidaying community, what are you waiting for? You could join a fantastic membership and be part of our extensive Holiday Exchange programme, so click Join RCI below and start travelling the world...

Málaga as a city