Like many holidaymakers, when my husband and I want a sandy beach and sunshine we head for the Costa del Sol. But when we want to see the real Spain, we hire a car and turn our backs on the sea. A short drive inland from almost anywhere along the coast between Málaga and Cádiz brings you to some of Spain’s most stunning scenery.

Chains of ruggedly beautiful mountains form the backdrop to a picture book of rural views. Vast fields of sunflowers ripple across the valleys. Real black fighting bulls - more often seen on hilltop billboards advertising sherry - look deceptively peaceful grazing in their sun-baked pastures. And nestled in the craggy slopes and on mountain tops are the pueblos blancos or Spain's ‘white towns’.

These villages, with their old Moorish castles, whitewashed houses and tiled roofs gleaming in the bright sunlight, are among the region’s most picturesque sights. They beckon you to leave the roads and to meander through the countryside, inviting you to stop and explore their winding streets, churches and central plazas. Most give little more than a passing nod to tourism, and you can see traditional village life play out, much as it has always done.

One of our favourite road trips is a spectacular drive through the pueblos blancos scattered among the mountains of the Parque Natural Sierra de Grazalema. Some stretches of the drive take you on well-paved, but high, winding roads, so you’ll need to be comfortable with mountain driving. With stops, it’s easily a full day out from your coastal accommodation, so get an early start to make the most of it. 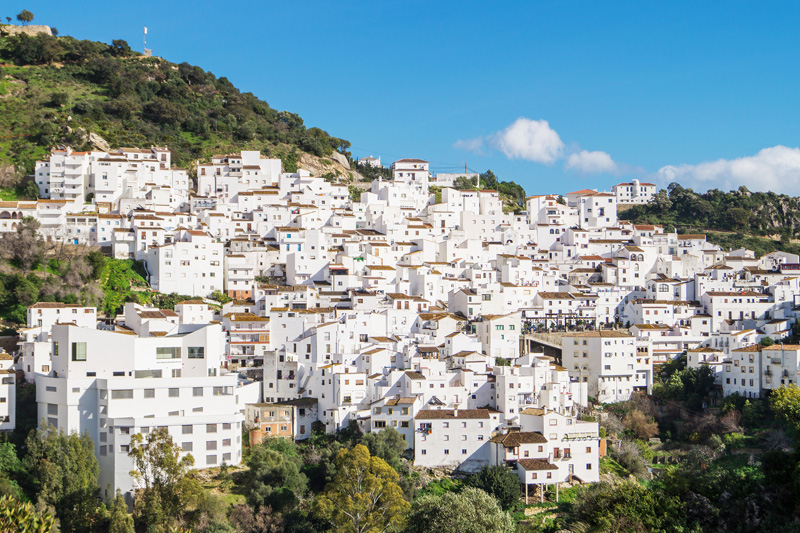 Close to the elegant resort of Estepona, the quaint village of Casares, with its ancient streets of white houses tumbling down the hillside, is a worthwhile stop along the way.

From the coast road, we turned inland near Estepona and followed the MA8300, which leads to the village of Casares. It’s an impressive sight, with its ancient streets of tightly packed white houses draped along a steep hillside below a Moorish fortress, the Alcazar. From here, gazing out to the sparkling Mediterranean, you can see Gibraltar on a clear day.

A few miles beyond, driving through olive-studded hillsides, is Gaucín, a large mountain village guarded by its own castillo (castle) which affords fine views back down to the coast. Many artists have made their homes here, and you can visit their workshops on open studio weekends or by appointment. The town is popular with international visitors and has several good restaurants, such as El Lateral with its pretty terrace for al fresco dining.

Making a note to return one evening, we headed north from Gaucín on the road towards Ronda, and turned left onto the A373 towards Cortes de la Frontera. Granite mountains towered in the distance, and below them on the hilltops the white towns stood out above brown fields and polka dot green slopes.

We followed the A373 through the town and continued on to Ubrique. This pretty backcountry road winds through a forest of cork oaks, which seemed magical in the dappled sunlight. There wasn’t another car in sight. We were, in fact, skirting the northern edge of another natural park, Los Alcornocales, named for the largest cork oak forest in Europe. 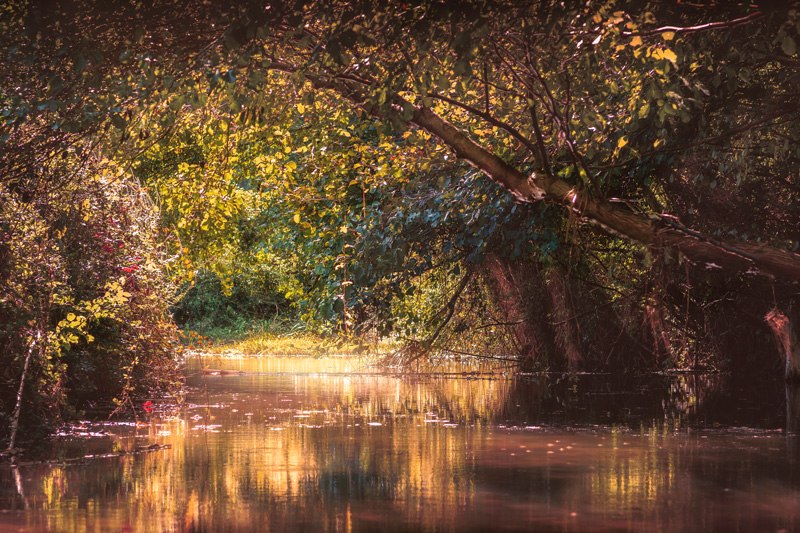 Los Alcornocales is a beautiful national park, named for its forest of cork oaks, and is a complete change of scenery from the white towns along your drive. 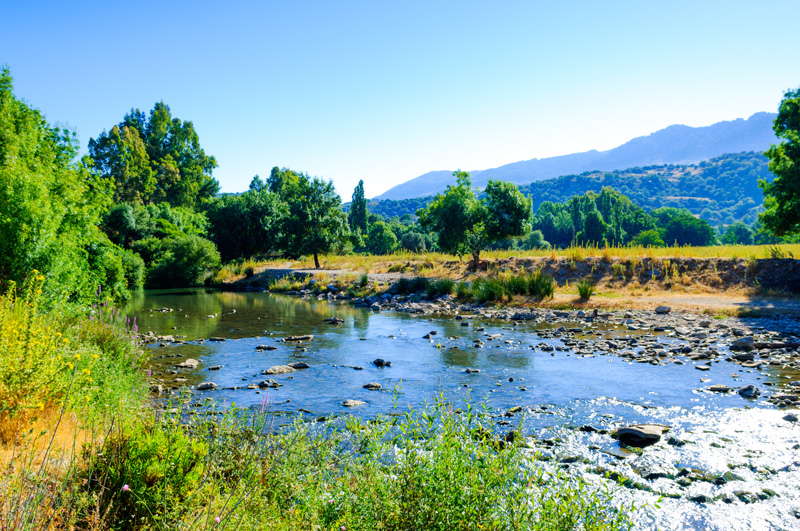 The road opened out into golden yellow fields strewn with rocks and grazing sheep as we approached the town of Ubrique.

The road opened out into golden yellow fields strewn with rocks and grazing sheep as we approached Ubrique. This large, busy town has been known for leather-making since medieval times. We skirted through it and continued north into Sierra de Grazalema Natural Park.

This nature park is an important environmental area in Andalucia. Many of its plant species date from before the Ice Age, including the rare pinsapo, or Spanish fir, native only to this region. The limestone peaks are home to the Spanish ibex, a threatened species, while eagles, vultures, owls and woodpeckers are among the park’s rich birdlife. In order to protect the wildlife, permits are needed for walking some of the routes in the park; they are available free from the information offices in Grazalema and El Bosque. 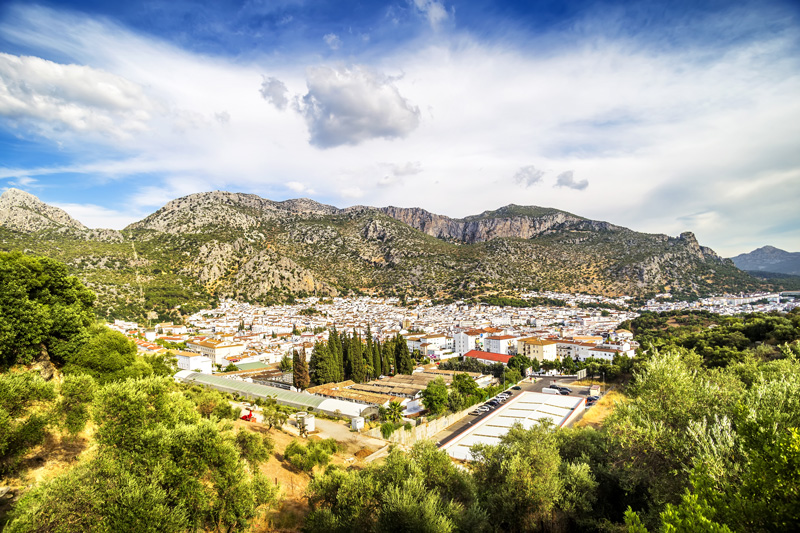 Ubrique is a large, busy town, known for leather-making since medieval times, and an interesting stopover before driving north into Sierra de Grazalema Natural Park.

Outside Ubrique, we turned right onto the A374. The road twists its way up to Benaocaz, a typical white town founded by the Moors in the 8th century, set against wooded slopes and limestone crags. On the outskirts of this town, the village Plaza de Vista Hermosa, which means ‘beautiful view’, lived up to its name. We walked down through the village to explore the central Plaza de las Libertades, ringed with pillars bearing ceramic tiles showing local scenes. We also wandered the narrow streets and ruins of the old Nazarí Quarter.

Continuing on, we drove through the rocky valley called La Manga (the sleeve) to Villaluenga del Rosario. Perched below the peaks of the Sierra del Caillo, it is the highest village along this route.

Our next stop was Grazalema, the eastern gateway to the park. This delightful village is stunningly set beneath the distinctive rock mass of the Peñón Grande. The surrounding peaks reach 1,500m, forming the first barrier to clouds blowing in from the Atlantic. Known as the rainiest place in Spain, the unique microclimate here is full of lush and varied vegetation.

Luckily, the sun was shining as we set out to explore this beautiful place. Grazalema was founded in Moorish times, and its cobbled streets led us up the hillside on a picturesque stroll past bright, white houses adorned with wrought-iron window grilles and colourful flowers trailing from the balconies.

Plaza de España, the main square, has bars, restaurants, churches and the tourist office, where we picked up information on walks and activities in the park. Just off the square, we bought local honey, cheese and Spanish ham at Sabores de Grazalema, a traditional grocery shop.

Continuing west, we turned right a couple of kilometres outside town onto CA-9104. Surrounded by a lush mountain landscape of cork and holm oak, pinsapo and pine, we entered the most dramatic section of the park. This part of the route is one of the most thrilling drives in Spain, and not for the faint-hearted. 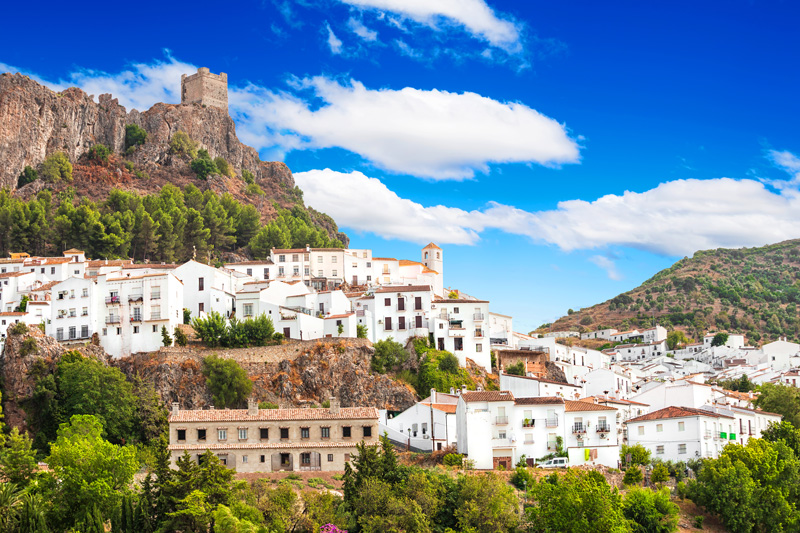 Zahara de la Sierra, a fortified hill town and one of the finest of the pueblos blancos. Perched on the north side of the Pass of the Doves, this ancient town is overlooked by the tower of its 12th century Moorish castle.

Climbing slowly up a mountain ridge, with stomach-churning glances into the rocky abyss, we triumphantly reached the Puerto de Las Palomas, the Pass of the Doves. At 1,357 metres, it’s the high point of the drive in more ways than one. From the mirador, the panoramic view over the surrounding plains is simply stupendous.

Coasting slowly down the S-bends on the northern side of the pass, we soaked up more grand scenery as we headed for Zahara de la Sierra, a fortified hill town and one of the finest of the pueblos blancos. The tower of its 12th-century Moorish castle stands atop a rugged outcrop, with the red-tiled roofs of its white houses spread invitingly below.

The town centre is itself a national monument. Zahara’s cobbled main street is bounded by two churches, with the pretty Plaza Mayor at the heart of the village. The mirador, or viewing balcony, at the far end affords beautiful views of a reservoir far below. At Cerveceria El Gallo, we grabbed a spot at one of the wine barrel tables set along the cobbled street, and rewarded ourselves with glasses of wine and delicious tapas.

We weren’t quite ready to leave this spectacular landscape behind, so as we left Zahara we turned west on the CA-8102. It took us back along the northern edge of the park to El Bosque, the park’s western gateway. From here, we followed the A372 through town and headed back into the heart of the park. 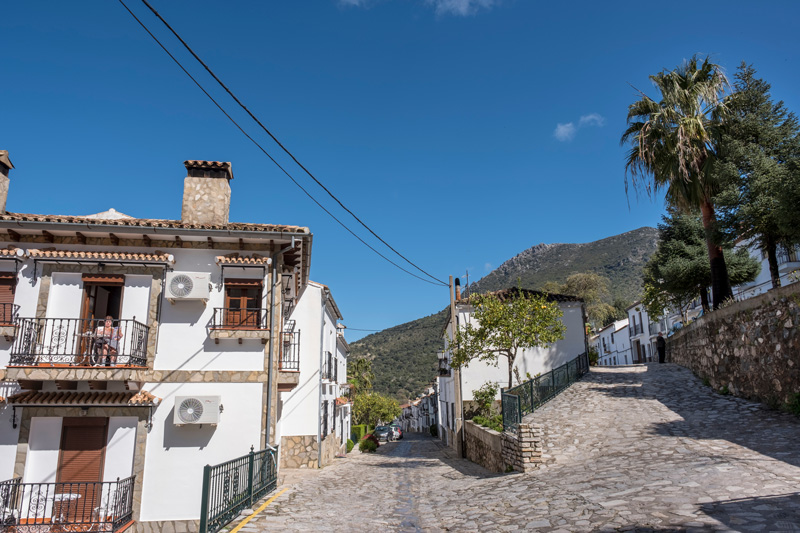 Benamahoma, another lovely white town, is set amid rugged limestone peaks. A stop-off here affords some incredible views back down into the valley.

The road climbed higher into the mountains, passing Benamahoma, another lovely white town set amid rugged limestone peaks. Further on, we stopped at Mirador Puerto de El Boyar to admire the fabulous view back down the valley. Then, before we knew it, we were back in Grazalema.

Continuing east out of the park, we had one last highlight to see before returning to the coast. Ronda is the queen bee of the white towns and one of the most photographed places in the entire region. 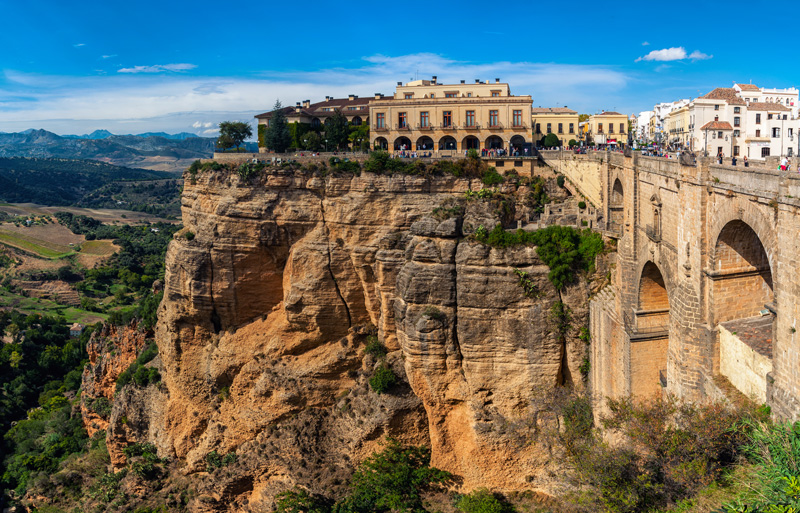 Saving the best until last, spectacular Ronda is the gem in the crown of the white towns, perched high up on a rocky gorge that splits the town in two.

Dramatically perched on the ridge of a deep, rocky gorge that splits the town in half, its buildings cling precariously to either side. The Puente Nuevo, a monumental arched bridge built in the 18th-century, spans the dizzying drop. First settled in Celtic times, Ronda’s defensive position made it a provincial capital under the Moors and later a bandit refuge.

The bridge connects the old Moorish town, the Ciudad, and the newer commercial quarter, the Mercadillo. From the centre, if you can bear to look down, there are stupendous views over the gorge and countryside. 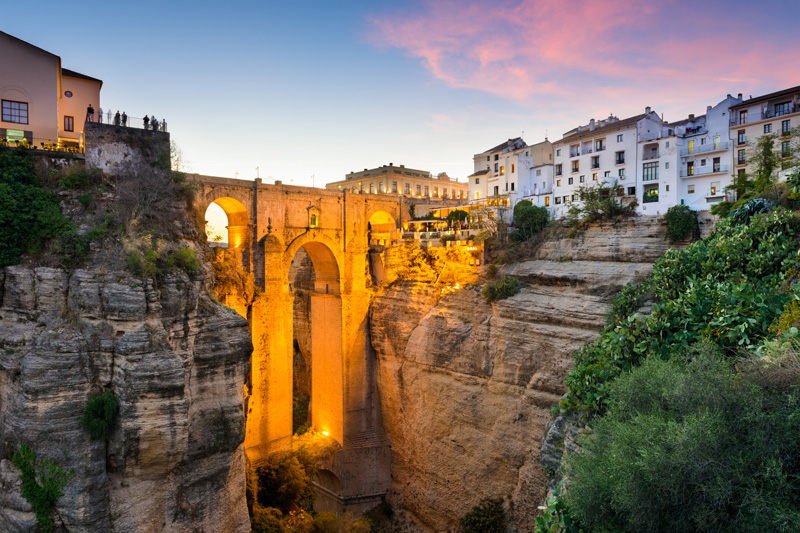 This stunning architectural feat spans the gorge and unites the two sides of Ronda. The Puente Nuevo was built way back in the 18th century and has served the town well.

The narrow maze of streets in the Ciudad leads to old Arab baths, lovely Renaissance mansions, a Moorish palace and museum, and the cathedral church on the palm-fringed central square. The Mercadillo boasts one of the oldest, largest and possibly most famous bullrings in Spain. The rules of bullfighting were laid down here in the 1780s.

Unlike the other white towns, Ronda is big and busy and has plenty of museums, historic mansions and other attractions to visit. But neither the years nor the tourists have daunted its character. We vowed to return and spend a full day exploring its atmospheric corners.

And that’s the beauty of the Costa del Sol. From its beautiful beaches and glamorous resorts, the real Spain is less than an hour away. 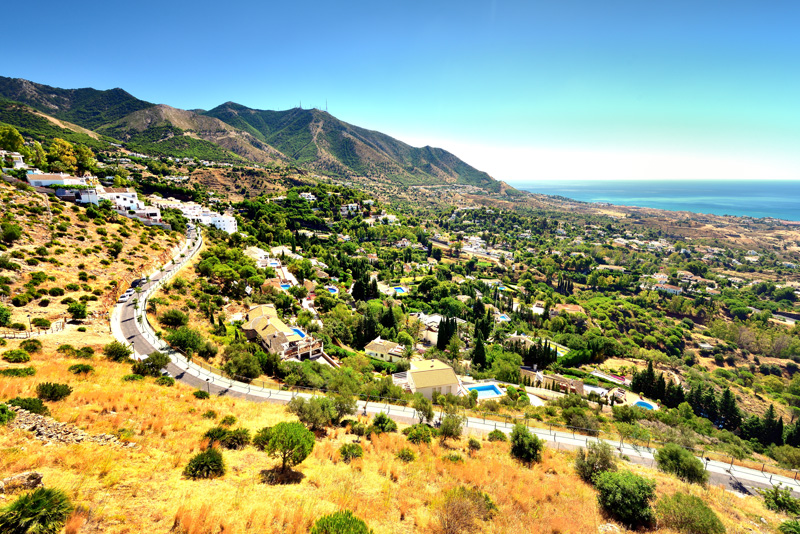 If you are on a beach in Spain, you are never far away from the ancient towns and villages which will transport you back in time to the way life was lived hundreds of years ago - and still is today.

Secret Beaches To Discover On Your Next Holiday

Around The World In Seven Photos