The Northern Lights - or Aurora Borealis - are one of the world’s most spectacular phenomena, but they are quite unpredictable and don't appear every day. However, it's not impossible to get a glimpse of them. Here are some top tips about how and where to see them. 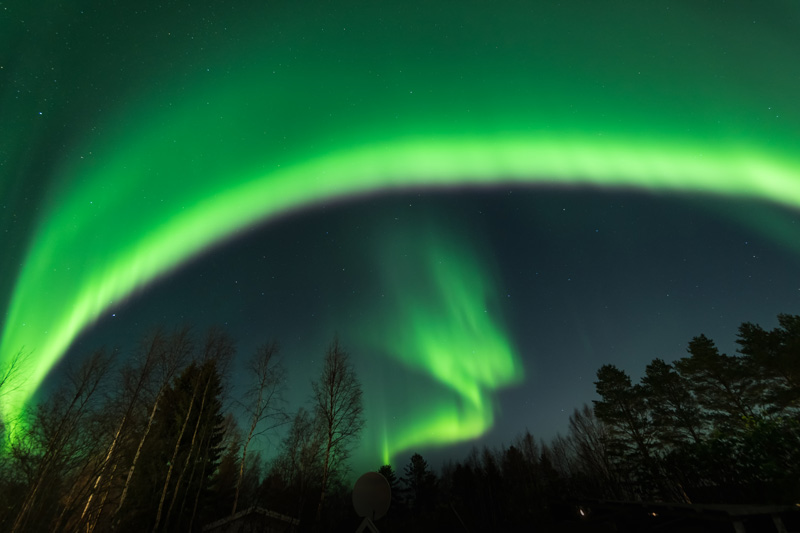 The Northern Lights are a phenomenon that many would like to see, but they are very unpredictable. The closer to the Arctic Circle you are, the best chance you have of seeing them.

The Aurora Borealis appear when the sun’s electrically charged particles enter the Earth’s atmosphere, which results in the colourful display across the night sky. So, they’re not something that can be turned on and off, unfortunately. Therefore, you have to make an educated guess as to where and when you'll have the best chance of seeing nature's very own festival of lights.

Visiting destinations in the Aurora Oval, which is close to the Arctic Circle (true north), is the best place to be, but this is a little out of the way for most of us.

Thankfully, you don’t always have to go all the way to the Arctic to catch a glimpse of them, as there are many other more accessible destinations, where the lights do show up.

Lapland isn’t just the home of Santa Claus, reindeer rides and blankets of thick snow, it’s also one of the best places on Earth to see the Northern Lights, which appear in the skies there around 150 days of the year. Late September through to March is the optimum time to catch them, so it is best to book your holiday during those months. Leaving the light-polluted towns behind and heading into the countryside will give you the best chance to see the lights, and while you're there, you can make the experience even more exciting by booking some other activities to do while you are there. 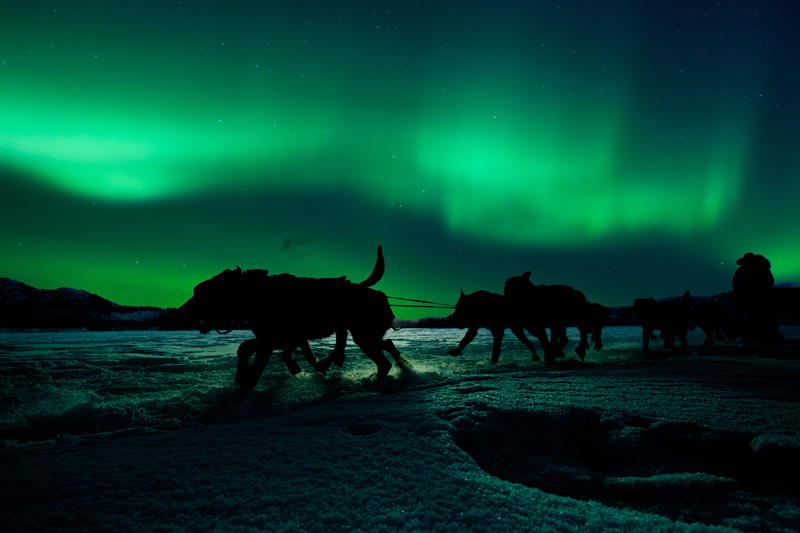 To make the holiday experience even more exciting, combine a Northern Lights excursion with an exciting husky or snowmobile ride.

Go cross-country skiing, take a trip on a snowmobile as night falls, or head out on an exhilarating husky ride in the Lapland countryside. It will make your trip all the more thrilling, and if the lights don’t show up or it is too cloudy to see them properly, at least you’ll still have an exciting holiday experience. Finland - especially Lapland - is full of beautiful national parks that thrive with a variety of wildlife, so nature enthusiasts will find plenty of places to explore in the day. There’s always the opportunity to visit Lapland’s capital, Rovaniemi, and pop in to see Santa himself.

RCI tip: Head out on an organised excursion with the local Sámi people, who are very knowledgeable in chasing the Northern Lights.

Bonnie Scotland - famous for tartan, men in kilts and Rabbie Burns - is also one of the surprising places you can witness the beautiful ‘Mirrie Dancers’. Scotland is on the same latitude as top viewing spots, Stavanger in Norway and Nunivak Island in Alaska, so the colourful light displays can often be seen dancing above the lochs and landscapes. Some of the best places to see the Northern Lights are the Scottish islands and highlands as they are more remote and have the least amount of light pollution getting in the way. 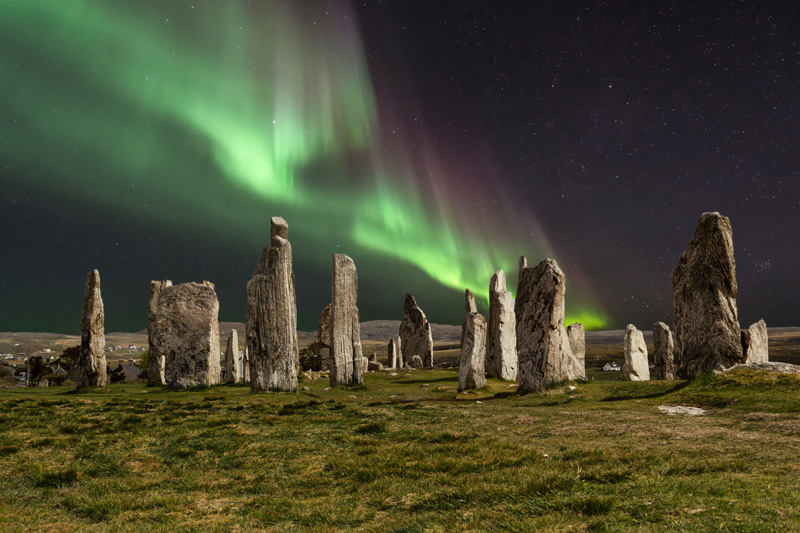 For those in the UK, you might not have to go too far to catch the Northern Lights dancing in the sky. They're often spotted in the skies in the Scottish Highlands. Pictured, are the lights illuminating the Callanish Stones in Scotland.

The Cairngorms, Aberdeenshire's countryside and the Moray Coast are just a few of the places on the mainland where the lights are frequently spotted. Scotland also happens to be one of the most beautiful places in the UK, and although it is far too cold for playing in the sea during the winter, many of Scotland’s beaches are among the prettiest in the UK, so are definitely worth visiting while you’re there to take in the beautiful scenery and all that fresh air.

The Northern Lights have been spotted in the skies all over the UK though, even as far south as Cornwall, so if geomagnetic conditions are right and it is a clear night you may well get lucky, even if you're holidaying in the south, and catch them there!

RCI tip: Park the car close to one of the lochs and wait - photograph opportunities are amazing with the colourful lights reflecting on the water.

With its close proximity to Alaska, some parts of Canada are prime Northern Lights viewing destinations, thanks to its position right under the Aurora Oval. The Canadian Rockies, Whitehorse in Yukon and Yellowknife in the Northwest Territories - with the latter’s Aurora Village hosting some great Northern Light-spotting nights - are excellent. Aurora Village has special heated Aurora-viewing seats which turn 360 degrees for optimum viewing, tepees where you can warm up and have a hot drink, and almost zero light pollution. 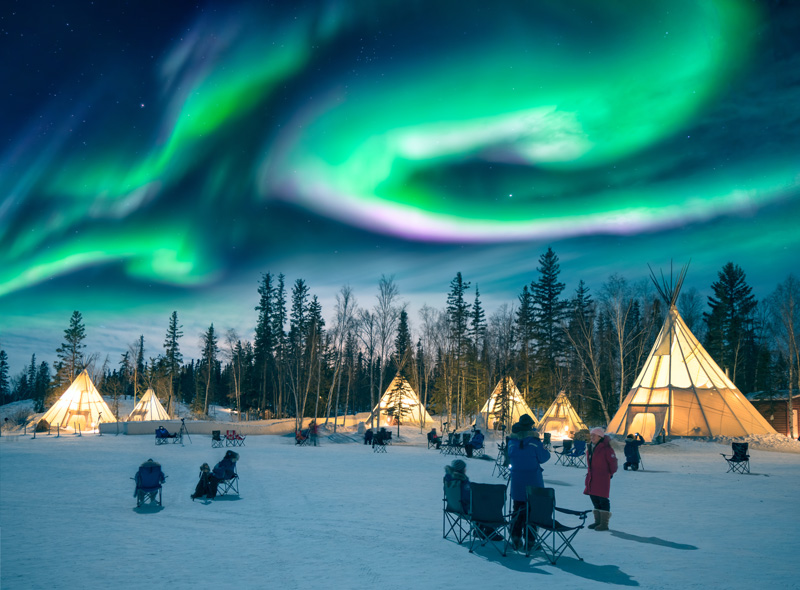 Whitehorse in Yukon and Yellowknife in the Northwest Territories of Canada are prime Northern Lights viewing destinations, being very close to Alaska.

Yellowknife also boasts that it is the best place on Earth to see the Northern Lights, so if that isn’t a good enough reason to go, I don’t know what is! Like Finland, with its snowy landscapes, there are plenty of opportunities to get out in the vast countryside on snowmobiles or skis, which makes chasing the Northern Lights even more fun. Even if you don’t get to see the illusive lights, you will still have a great time.

RCI tip: Head out on a snowmobile, as the sun goes down, for an exciting adventure. 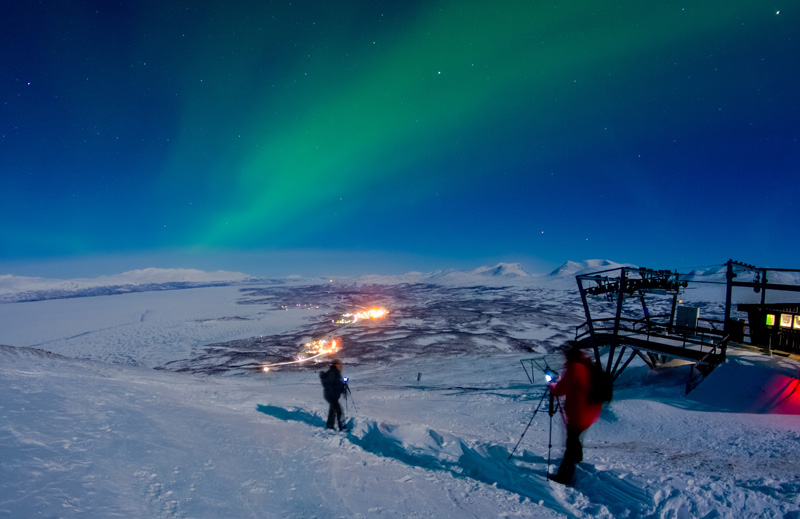 There are plenty of opportunities to get out in the vast countryside on snowmobiles or skis, thanks to the nature of the places in the world that you're most likely to see the lights. Even if you don’t get to see the illusive Northern Lights, you will still have a great time.

Download an app: The My Aurora Forecast app will let you know where and when you will have the best chance of seeing the lights, based on its tracking of solar geomagnetic activity.

Keep warm: As the ideal conditions usually fall in the middle of the night, and at the coldest time of the year, it is best to wrap up warm. If you do get to see the lights, you don’t want the memory to be marred by the fact you couldn’t feel your fingers because you forgot your gloves!

Take a camera: You won’t want to forget the moment you see the beautiful lights, so make sure you catch it on camera. Setting your camera on a slow shutter speed will make the lights look even more spectacular, as cameras can often pick out even more colours than the naked eye.

Be patient: Don’t spend 10 minutes looking up and head back inside. The Northern Lights can crop up at any point during the night, so make sure you are in it for the long haul.

Don’t be disappointed if you don’t see them. No matter how much effort you put into organising a holiday around seeing the Northern Lights, it doesn’t always mean they will appear. You will however, get to see some spectacular landscapes and wildlife, so try and get more activities planned into the holiday so you don’t feel like you’ve missed out. 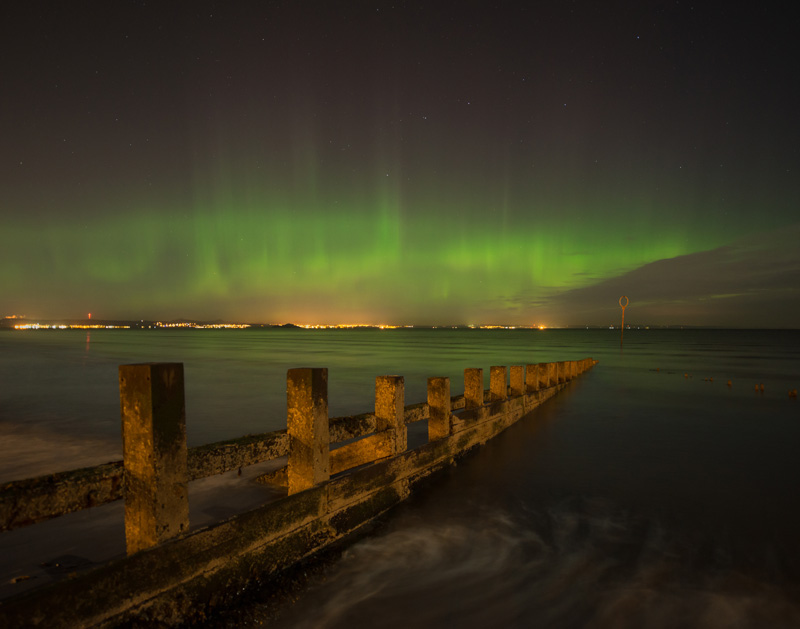 If you really want to see the Northern Lights, make sure you take a camera and keep nice and warm, as it can be cold throughout the night in locations such as Portobello Beach in Scotland, pictured here!

If you are an RCI member and would like to book a holiday in Finland, Scotland or Canada, it is easy with the RCI Resort Directory to help you. Click on the button below and you could soon be on your way to see the magical Northern Lights on your next holiday.

If you own timeshare, but are not yet a member of RCI, what are you waiting for? Become part of the RCI Holiday Exchange community by clicking the Join RCI button below and sign up in a few simple steps.