Following the success of a trip to the beautiful island of Rhodes a couple of years ago - perhaps a blog for another day - I have set myself the goal of visiting as much of Greece as I can. Crete is the second Greek island to be ticked off my list and, like Rhodes, I was not disappointed. 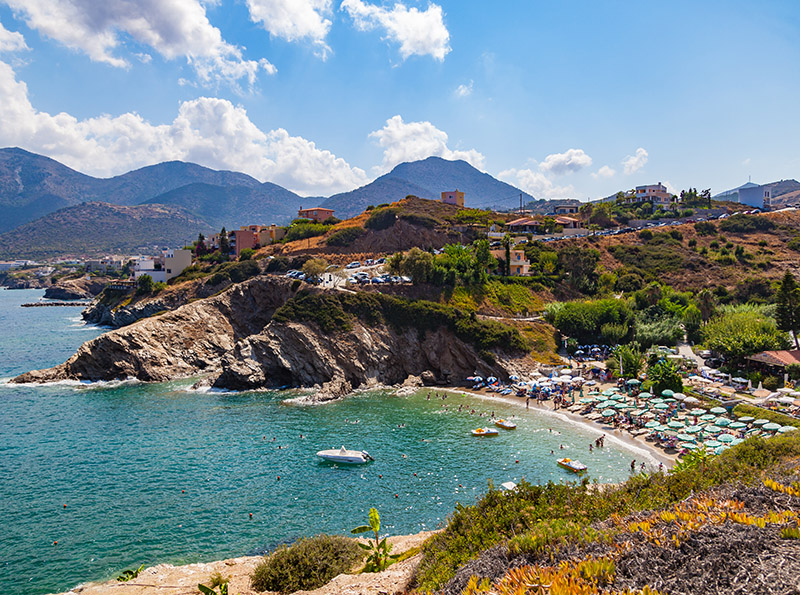 Bali in Crete is a charming small fishing village north of Heraklion and south of Rethymno, which was Amy's base for her holiday.

Travelling with a friend, and both of us equally new to Crete and so a little unsure of the best area to stay in, we more or less shut our eyes and put our finger on the map - on Bali, to be exact. Not quite as exotic as Bali in Indonesia, but with its own charm, Bali in Crete is a small fishing village north of Heraklion and south of Rethymno.

We stepped off the plane at Heraklion airport fairly late in the evening. Aware that we had a 45-minute journey ahead of us, we wasted no time in loading our suitcases and hopping into the front seats of the minibus. This turned out to be a great decision, as we soon learned that our transfer driver was very friendly and happy to chat on the journey.

A well-travelled man, our driver told us he had lived in many countries, including Germany and Italy, throughout his life, before returning back to his native home of Crete. As we wound our way across the island, luminous coastline to the right and dark silhouettes of mountains to the left, I asked him what he thought of Cretan life versus living in places such as Germany. He simply stated that it is more 'free' - not to be confused with 'relaxed'; Cretans work hard, but are not afraid to leave the door unlocked or take a stroll in the middle of the night. Their homes are simply a base and their lives are lived outside with friends. 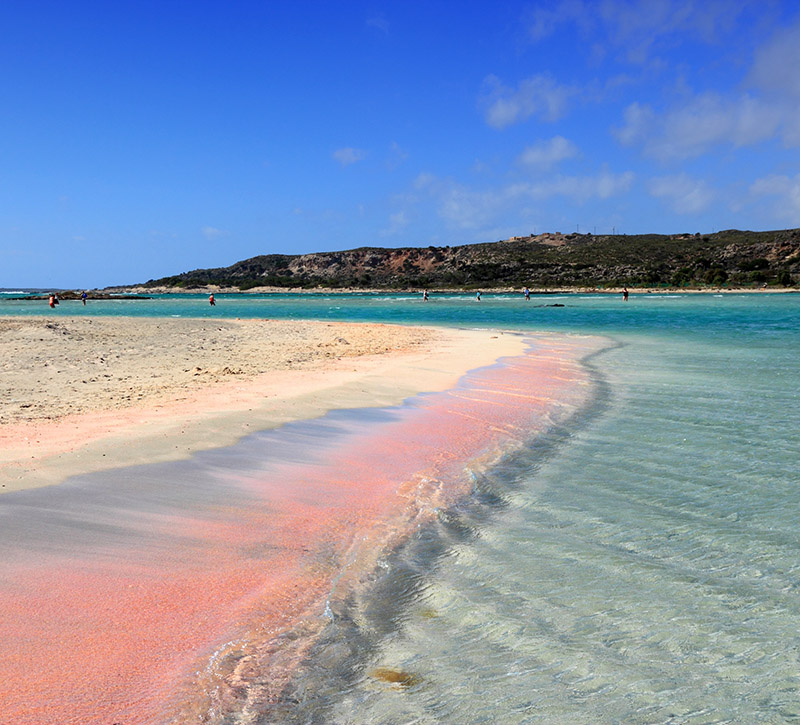 The sand on Elafonisi Beach is pink, as the coral has been broken down by the waves over time and washed up on the shore.

When daylight arrived the following day, my breath was taken away by the unique landscape that Crete offers. Like no country or island I have visited before, the island is entirely made up of tall mountains, chequered with olive groves and individual houses, accompanied by a gentle symphony of bird song, loud crickets and the odd bleat from a goat.

Having decided against a hire car, the first thing we did was book a couple of tours. It was hard to choose between everything there is to see and experience in Crete. From Zeus’ Cave to the pink sands of Elafonisi, if you enjoy culture, rich history and relaxation, Crete should definitely be top of your list. 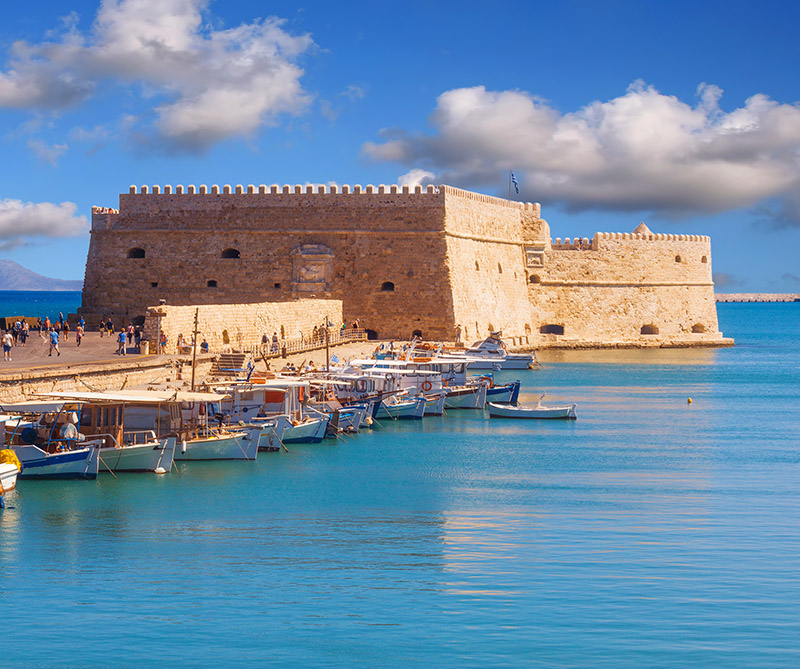 This Venetian fortress is one of three forts that were built in the 1500s to defend the island from the Ottoman Turks.

Our first tour was to Balos Lagoon. A two-hour journey north from Bali, we travelled through the foothills on winding and rather narrow roads, following the edge of the island to Kissamos Port. Our tour guide was great and shared a few facts about the island’s rich history as we drove. En route to Balos, our ferry took us to an uninhabited island called Gramvousa, passing a beached shipwreck on the way.

At the top of the highest hill on Gramvousa lies the ruins of a Venetian fortress; one of three forts that were built in the 1500s to defend the island from the Ottoman Turks. The top of the hill was entirely exposed to the unrelenting heat of the Cretan sun, which made the climb up a painful number of steps particularly difficult.

​I would recommend visiting in a cooler season if you want to truly appreciate the history that lies on the top of the hills. The only sign of life on the island appeared to be a small shack that sold various shell jewellery to visiting tourists. A particular sadness washed over me as I watched the hundreds of people from our single ferry pile onto the small island, feeling as if I would achieve a better appreciation of the island if I could visit alone, or at least in a smaller group.

Our next stop was the lagoon at Balos. Our ship haphazardly dropped us off on a rocky make-shift dock and we ambled over the rock pools to a large horseshoe-shaped section of sand. The lagoon was separated by the ocean with a sandbank one side, rocks on the other, with hillsides on either side. The water in the lagoon felt like a warming bath and was ankle depth for a long stretch, it was also home to two deeper pools, one you could swim in and one that was waist height. Definitely a quiet corner of Crete and somewhere I have stored in my memory for those moments when I need to journey in my mind away from my desk and onto a beach. 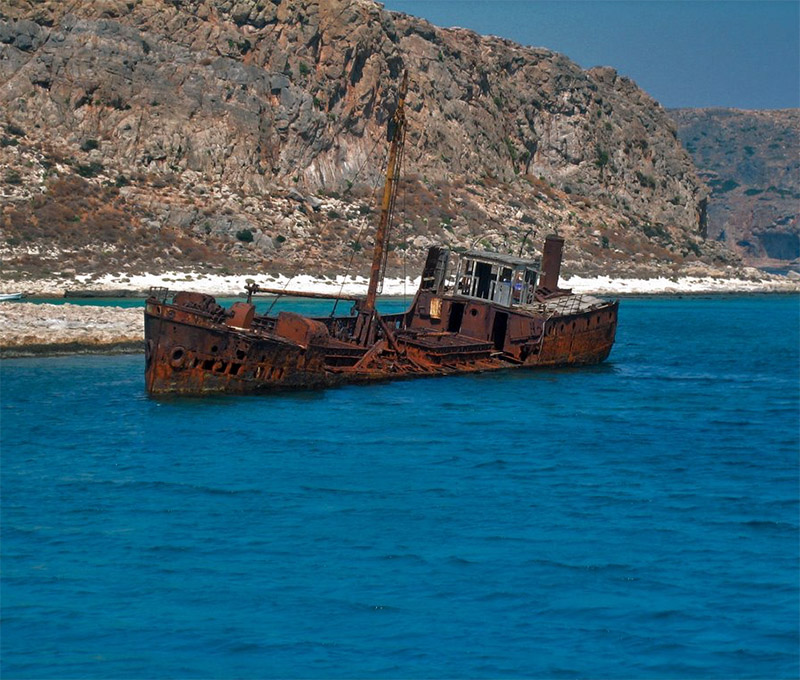 En route to Balos, Amy passed an impressive shipwreck on the way.

Our other tour was to the island of Spinalonga from Agios Nikolaos. This time travelling south, we had the chance to explore Agios Nikolaos but again, the heat of the day and the hilly terrain did not make a good combination, so we just sat in the first café we came across and gazed out to sea instead. Halfway to our destination, the ferry dropped the anchor and allowed everybody to go for a dip in the ocean. I’m not sure how the sea surrounding Crete differs from the sea surrounding other islands, but the experience is always something I would recommend. There is something so free and exhilarating about swimming in a potentially bottomless ocean.

Spinalonga is an island with a unique history. Originally one of the three Venetian fortresses that protected the island, the Greek government turned it into a Leper Colony in 1903. A book called The Island which is set on Spinalonga during this time gives great perspective and understanding of life on the island whilst home to lepers. Our brilliant tour guide on the island was not afraid to give us her own views of the island. She told us that many people knew the island as 'the island of tears' or 'the island of death', but she would argue that the people who lived on it were freed from the stigma of leprosy, which meant they no longer had to hide in the island’s caves. Life there evolved and even thrived as the community realised the opportunity the island offered them. It was really easy to imagine how things might have been and we really enjoyed exploring the derelict buildings. 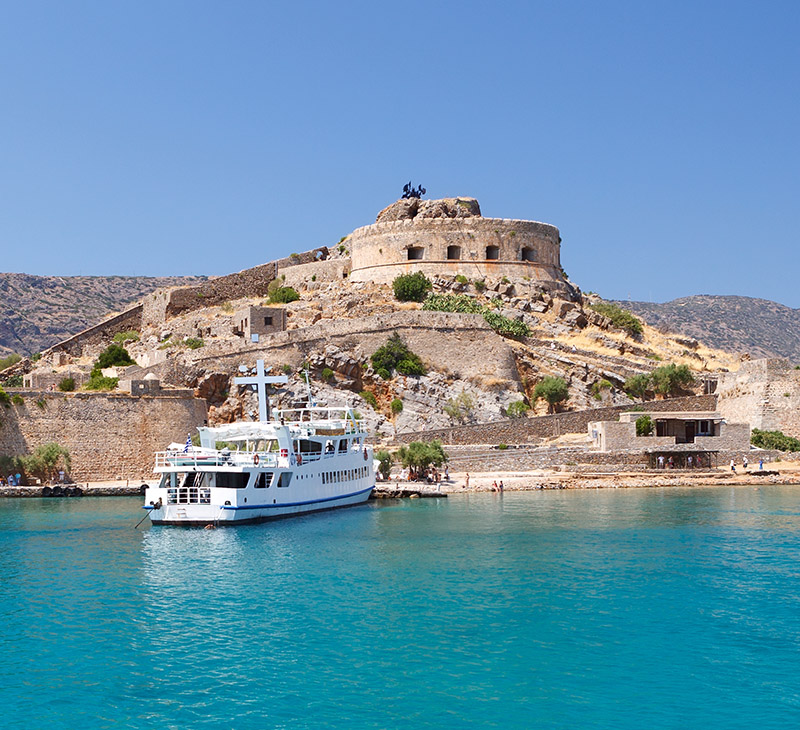 Well known for its party towns of Hersonissos and Malia, I was surprised at the amount of culture and history there was to explore on Crete. The largest of the Greek islands is home to so much Greek mythology and the location of various legends can be explored. Additionally, Crete has survived many conflicts and difficulties from pirate invasions in approximately the 6th century BC - which meant most towns were constructed within the safety of the mountains and away from the shores; to the Ottoman Turk’s invasion of the Venetian ruling; and an invasion by Nazi Germany in World War Two - the island fought the invasion and it was the first time that the German troops had encountered mass resistance from civilians.

The clear resilience of the island and its inhabitants, the wonderful hospitality provided to us by everybody we met, and the hard-working nature of the locals we encountered, led me to truly believe that in Crete, people are free.

RCI has 12 resorts in Crete for members to book.

If you would like to make Crete your next holiday, click the Join RCI Resort Directory below and choose your accommodation.

If you own timeshare but are not a member of RCI, you could become part of the holiday exchange community today. Click on the Join RCI button and sign up in just a few simple steps.

A Love Affair With Crete