Saturday 22 September 2018 marks the opening day of Munich’s 185th Oktoberfest. The saying goes: “The Germans are so efficient they start Oktoberfest in September", but this isn’t strictly true! The weather conditions are just that little bit warmer a few weeks earlier, and with the ever increasing turnout for the festival, it was decided the event should be brought forward and extended, therefore starting in September. 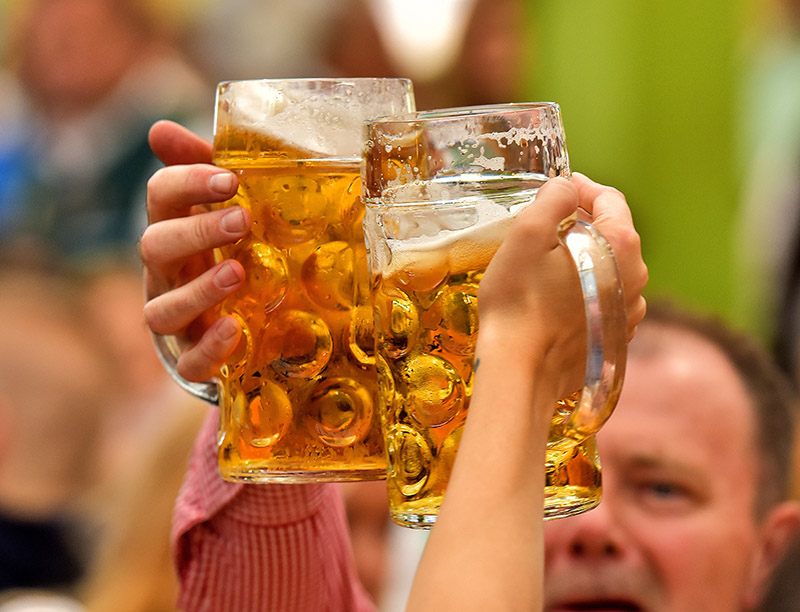 Throughout Oktoberfest, nearly 7 million litres of beer is served in 1-litre glasses to festival-goers. In 2018, organisers have confirmed a beer will set you back between €9.70 and €10.10, so make sure you come prepared!

The festival was first held in 1810 - 208 years ago - the missing years when the festival was not held was due to war and epidemics. The first event which took place on 12 October, was to honour the marriage of Bavarian Crown Prince Ludwig to Princess Therese von Sachsen-Hildburghausen, and which culminated in a horse race on 17 October. The horse race did eventually disappear from the annual celebrations in 1960, but the festival itself continued to grow immensely in popularity over the years.

Today, there are as many as 7 million visitors to the festival over its 16-18 day period, travelling from all over the world. In fact, as part of a friend's birthday celebrations, my partner was invited to join in the merriment of Munich in 2013. This was rather untimely, as we had just found out we were expecting our first child. I cannot tell you how delighted I was that he forged ahead with plans to leave the country, and be full of beer for three days… Really! However, it wasn’t Germany’s fault, and perhaps I felt a little green-eyed that I couldn’t go along and enjoy the Bavarian shindig myself! 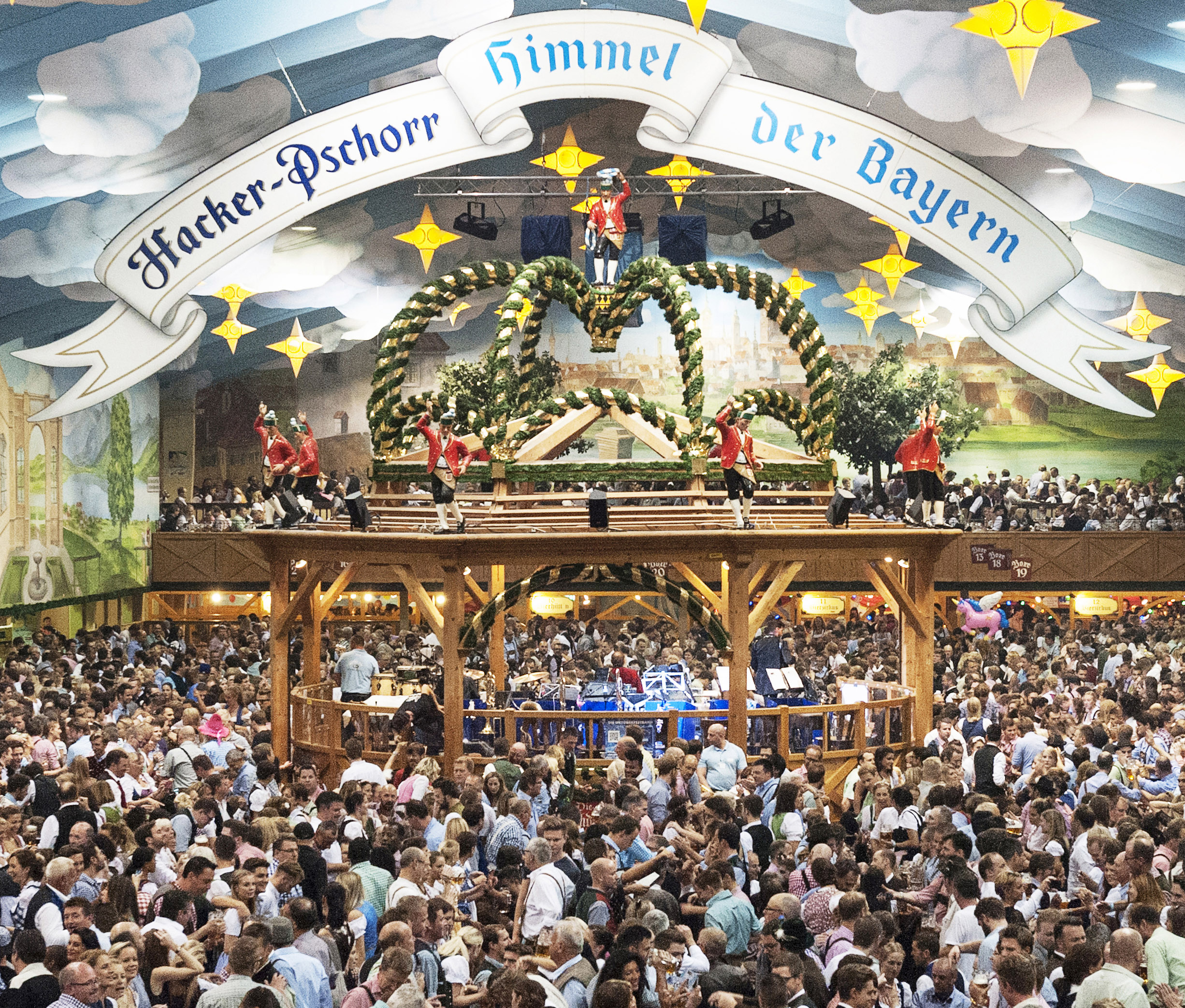 It is estimated that around 7 million visitors will attend Oktoberfest 2018 over the 16-18 day period, travelling to Germany from all over the world.

There are more than 30 marquees on the Theresienwiese, the area of land which is used for the festival. Construction of the stalls and fairground rides starts as early as June, in order to be ready for its eagerly anticipated September opening. On the first day, the Lord Mayor of Munich opens the first barrel of beer and declares: "O'zapft is!" (It is tapped). Oktoberfest has begun!

The event waiting staff, and, in fact, many of the festival-goers too, wear traditional Bavarian clothing. For the men, this means a white shirt, waistcoat and lederhosen, and for women, the traditional dirndl - a corseted dress with a full skirt - is worn. The festival is family-friendly and children may attend in the afternoons, although they will need to leave by 8pm. 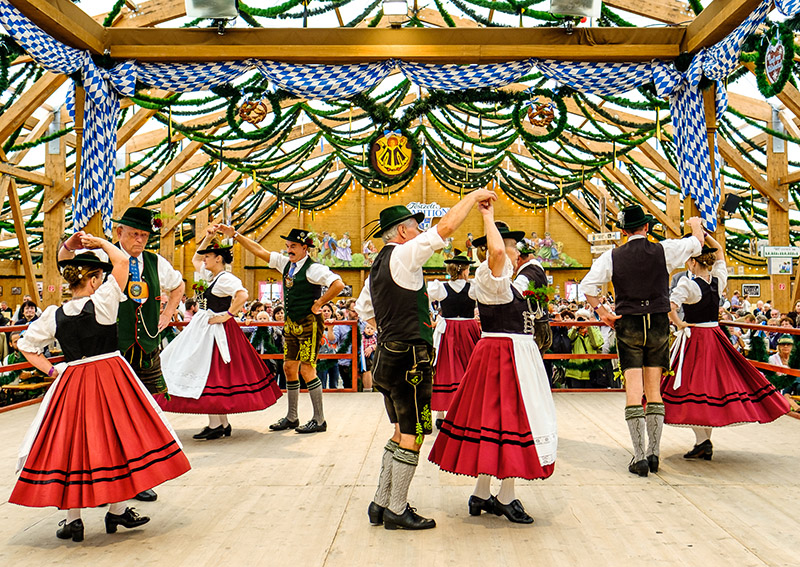 To really get into the spirit of Oktoberfest, many visitors and staff choose to wear traditional Bavarian clothing - lederhosen for the men, and for women, the dirndl - a corseted dress with a full skirt.

It’s easy to see how the crowds of partygoers get excited about the uplifting festivities, with beer swilling and the sloshing of huge, 1-litre glasses, as they are clinked together. Cheering and dancing commences as the Oompah band takes up its instruments. The tuba, accordion and clarinet strike up a mixture of cover versions of modern songs (yes, even Britney Spears gets the Oompah treatment), along with some more traditional Bavarian melodies. Entrance to the festival is free, but of course you will need funds to purchase food and drink, or go on any of the fairground rides. Expect to pay between €9.70 and €10.10 for a beer this year. For an event with a captive audience, and beer served in 1-litre capacity glass mugs, that doesn’t sound too bad! 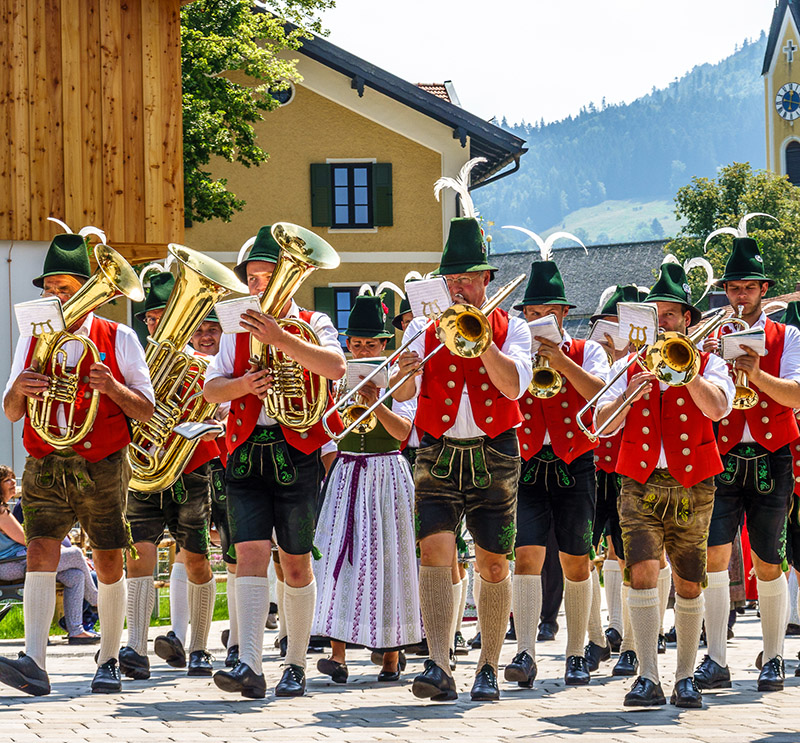 The Oompah band is one of the highlights of the festivities, ensuring everyone gets up dancing and singing along to modern pop songs and traditional Bavarian melodies.

It’s not all about the beer - it is mainly about the beer - traditional Bavarian food is served up in vast quantities over the course of the festival. The consumption of around 120 slow-roasted oxen, served in portions with potatoes in a red wine sauce, 500,000 rotisserie chickens, 140,000 sausages and 75,000 pork shanks are all washed down with 7 million litres of beer and 95,000 litres of wine. That is some shopping list! The delicious bratwurst and currywurst sausages are accompanied by traditional German dishes of sauerkraut, potato salad (kartoffelsalat), sweet and sour cabbage (rotkohl), and potato pancakes (kartoffelpuffer). Another must-have food item at Oktoberfest is brazen, a large, soft pretzel - the perfect accompaniment to beer. 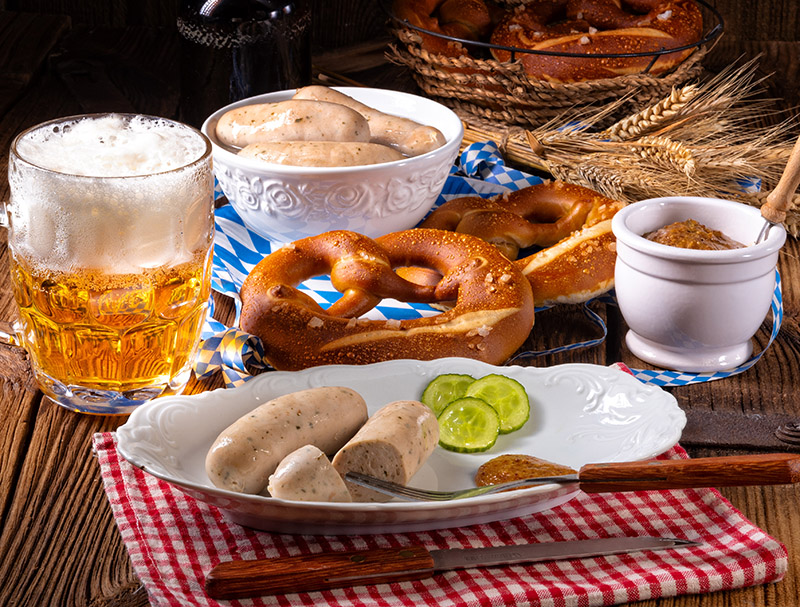 German food is also a huge part of Oktoberfest. Look out for the likes of bratwurst and currywurst sausages, sauerkraut, kartoffelsalat and brazen - a large, soft pretzel.

All the eating, drinking, dancing and laughing makes for a very heavy night's sleep, ready to feel ‘refreshed’ enough to start all over again the next day. Albeit, many of the revellers will be comically observed by the waiting staff as Bierleichen - beer corpses! It is hardly surprising then that the event team have further amusement, even after the festival has ended, with literally thousands of items of lost property being recovered during the clear-up process. Along with the inevitable keys, purses, wallets and mobile phones, there are the more unusual items that have been retrieved over the years, including walking sticks, a craft box, car licence plates, two French horns, and even a dog. Anything not claimed after the event is stored at Munich’s central lost and found office for six months, before being sold off in a public auction. Don’t worry, the dog was eventually reunited with its owner! 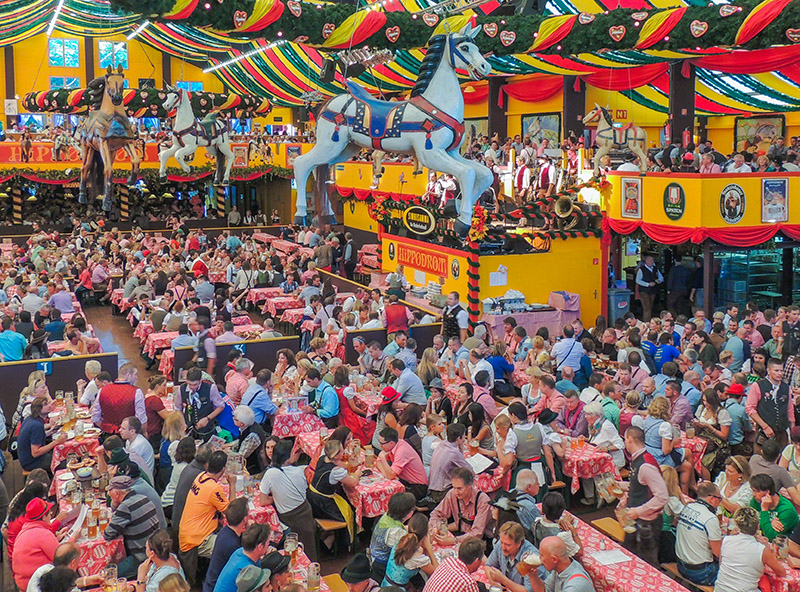 Naturally, all the alcohol and many people packed into beer tents having a great time, it's easy to misplace your belongings. Make sure you hang onto important items such as keys wallets and dogs - yes really!

Should you decide to attend Oktoberfest yourself, it is strongly advised you book your travel as far in advance as possible. Predictably, flight prices do hike up over the dates of the event. Direct flights from the UK to Munich are available from London, Birmingham, Edinburgh, Glasgow, Cardiff, Bristol and Manchester.

Once there, getting to Oktoberfest by public transport is relatively easy via suburban over ground train (S-Bahn), or the underground (U-Bahn). Expect large crowds, so allow yourself plenty of time to get in and out of the grounds.

​If you are in Munich for a few days, maybe take a rest day from the festival and explore some of the other attractions the city has to offer. You do not have to go to the festival every day! Nymphenburg Palace, the Olympic Park, BMW World or even FC Bayern’s Allianz Arena, are all right on your doorstep. So why not make the most of your Bavarian break, and at least have some parts of it you can actually remember when you return home!

There are 16 resorts in Germany that are available for RCI members to exchange into.

If you are a member of RCI and would like to make Germany your next holiday, click on the RCI Resort Directory button below and choose your accommodation.

If you are a timeshare owner but are not yet an RCI member, why not widen your holiday horizons and become part of the holiday exchange community? Click the Join RCI button below and sign up in just a few simple steps.