Fireworks Around The World

The exciting spectacle of firework displays means we’ll always remember, remember the fifth of November, the annual commemoration of Guy Fawkes’ failed attempt to assassinate King James I of England and VI of Scotland by blowing up the Houses of Parliament. Bonfire Night does not have the monopoly on a firework party. We take a look at some firework fiestas around the world. 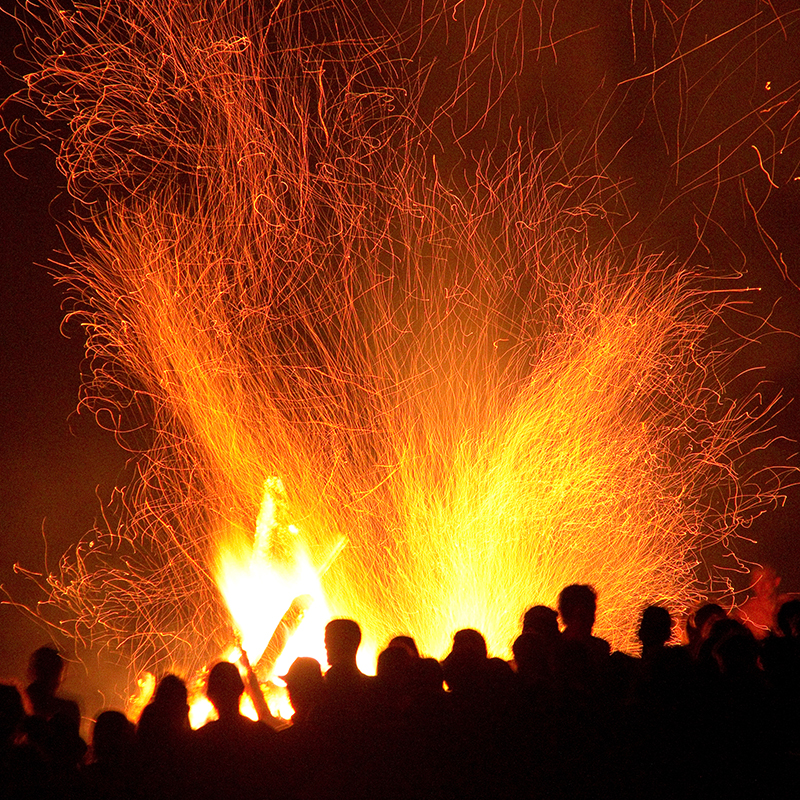 Remember remember the fifth of November... A night for fireworks, bonfires and making a Guy Fawkes to throw on the flames.

The fateful event took place in November 1605, but fireworks have been used as a form of celebration for centuries, dating all the way back to seventh century China, where it’s believed they were invented.

Rockets, mortars and cakes (yes, really) seem to have got bigger, better, louder and more spectacular every year since then, lighting up events across the world.

So, if you want to turn your eyes to your holiday skies and enjoy a little pyrotechnic excitement in other places, and at times other than just Bonfire Night, then here’s five of the very best dazzling fireworks displays.

Fireworks are only one element of this truly explosive festival, which celebrates the arrival of spring with a carnival of bonfires, fiestas and pyrotechnics.

Valencians bid farewell to winter by building giant papier-mâché figures known as 'ninots'. These figures are usually in the form of an unflattering image of a celebrity or political figure. They are displayed across the city before they are stuffed with fireworks and set alight at the event’s finale on St Joseph’s Day.

Before the climax of the festival, however, there is a daily cacophony of firecrackers ripping through the Plaza del Ayuntamiento, as neighbourhood groups try to out-decibel each other. The whole event is effectively one mad party that’s definitely not for the faint hearted. 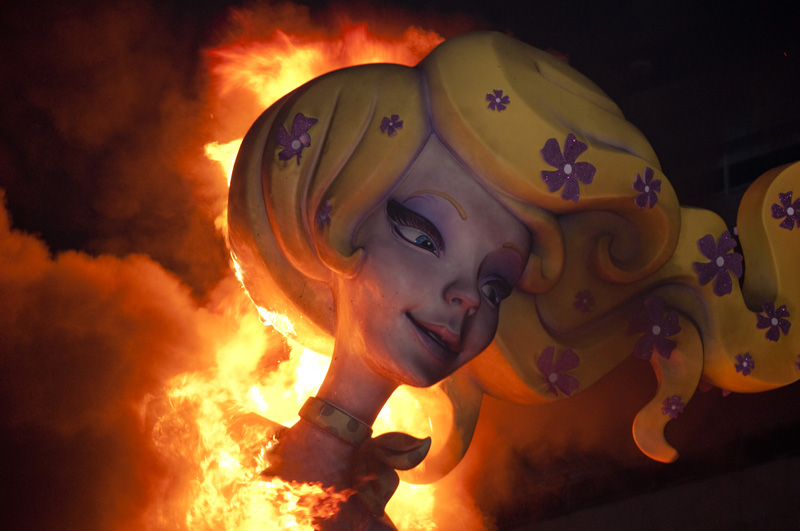 Valencia's fireworks are rather different. Locals build giant papier-mâché figures known as 'ninots' and then they display them across the city before stuffing them with fireworks and setting them alight.

Best place to view:
You can see fireworks and ninots burning throughout the city, but the main Nit del Foc (‘Night of Fire’) display takes place in the Paseo de la Alameda, Valencia’s main public garden.

Other things to do:
Valencia is a lovely city to explore on foot, with a great mix of old and new buildings, from medieval castles and ancient churches to modernist and art deco architecture. The tree-lined squares are great places for coffee, or a glass of wine, as well as people-watching. The city’s cathedral supposedly contains the (real) Holy Grail, while the colourful, historic Central Market is also definitely worth a visit. Don't miss a visit to the ultra-modern City of the Arts and Sciences, an amazing collection of buildings surrounded by water and housing museums, aquariums and entertainment venues.

Fireworks light up the sky all over the United States to celebrate Independence Day, but there are few more exciting places to experience the explosive show of patriotism than the Big Apple.

The city’s spectacular display comes courtesy of famous department store, Macy’s, which puts on not only the largest Independence Day pyrotechnics display in America, but adds performances from musical superstars such as Beyoncé, Justin Timberlake and Katy Perry. Around three million people line the banks of the East River to watch the show, which sees fireworks set off from barges on the water to light up New York City's iconic skyline. 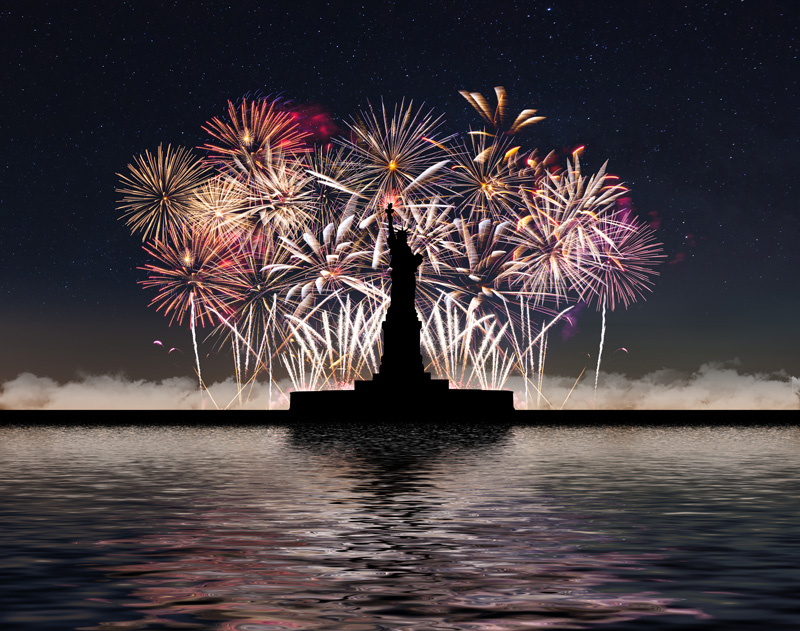 America knows how to do fireworks, and the biggest pyrotechnic show celebrates Independence Day. Around three million people line the banks of the East River in New York City to watch the show each year.

Best place to view:
With seven firework barges located on the river between 23rd and 42nd Streets, there are plenty of places to watch. Find somewhere in Brooklyn, Manhattan or Queens with an unobstructed view of the sky and you should be set to enjoy the display. Better yet, splash out on one of the many cruises that set sail from Manhattan, Brooklyn, the Bronx and New Jersey, and you’ll get a close-up view right on the water.

Other things to do:
Where to start? Arguably the most exciting city in the world, there is so much to see and do in New York, whether you’re a newcomer or regular visitor. One of my favourite things to do is walk along the High Line, a 1.45-mile-long stretch of former railtrack that’s been converted into an urban playground, complete with greenery, wildflowers and art installations. It runs from Hudson Yards to Chelsea, where you can check out the market and then head on to the 9/11 Memorial, a beautifully fitting tribute to the victims of the World Trade Center terrorist attack. Located on the original site of the twin towers, the monument comprises two huge reflecting pools inscribed with the names of the victims, with waterfalls cascading down the sides.

Vive le revolution! Bastille Day commemorates the Storming of the Bastille - a symbol of the French Revolution - and effectively the country’s version of America’s Independence Day. It’s celebrated in similar fashion too, with firework displays taking place all over France, but the biggest one being centered on and around the Eiffel Tower in Paris, lighting the world-famous landmark up in an array of colours. 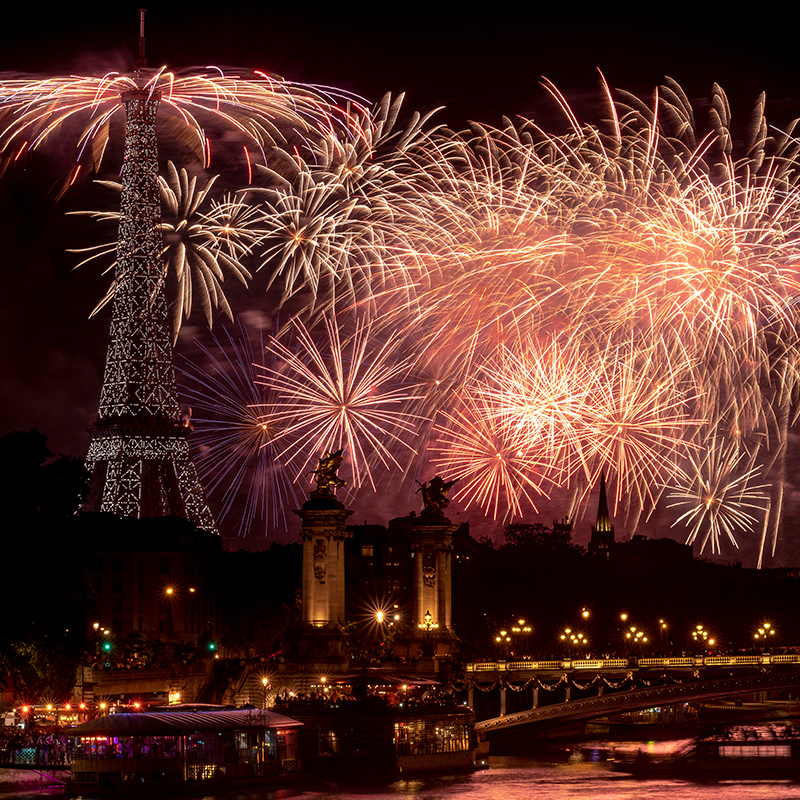 Bastille Day is one of France's biggest events of the year, and there's no better place to be than the capital city. Head to the Eiffel Tower to get a perfect view of the fireworks display.

Best place to view:
The ideal vantage point is also by far the busiest. Hardly surprising, given that the Champ de Mars, the huge green park in front of the Eiffel Tower, is free to enter. It offers brilliant views of the fireworks displays, and also hosts a live classical concert that peaks with a patriotic rendition of the country's national anthem, Le Marseillaise. People start bagging their viewing spots mid-afternoon, but if you don’t fancy that (or the crowds) then a good - but pricey - alternative is to take a dinner cruise along the River Seine, as the boats will stop to let you enjoy the show.

Other things to do:
Like New York, you’re ridiculously spoiled for choice in Paris, but first-timers should prioritise the major landmarks, as none will disappoint. If anything the Eiffel Tower is even more impressive at close quarters - and yes, you should take a trip up it, whether you take the stairs is up to you. The Arc de Triomphe, Champs-Élysées and the Louvre, the world’s largest and most visited museum, are also must visit venues if this is going to be your first trip to Paris. You can’t possibly see it all in one visit, so don’t even try. Give sightseeing three or four hours, and then escape for a coffee and some people-watching, which is probably the most popular Parisian pastime, no matter how hard the locals try to feign their disinterest.

The world’s largest and most prestigious fireworks competition sees the very best companies from across the globe pitching up in Montréal to perform 30-minute pyrotechnic displays in the hope of claiming the Gold Jupiter Trophy, the firework's industry’s top gong.

The month-long extravaganza makes for a thrilling spectacle that draws around three million pyro-maniacs to Montréal’s La Ronde Amusement Park every year. 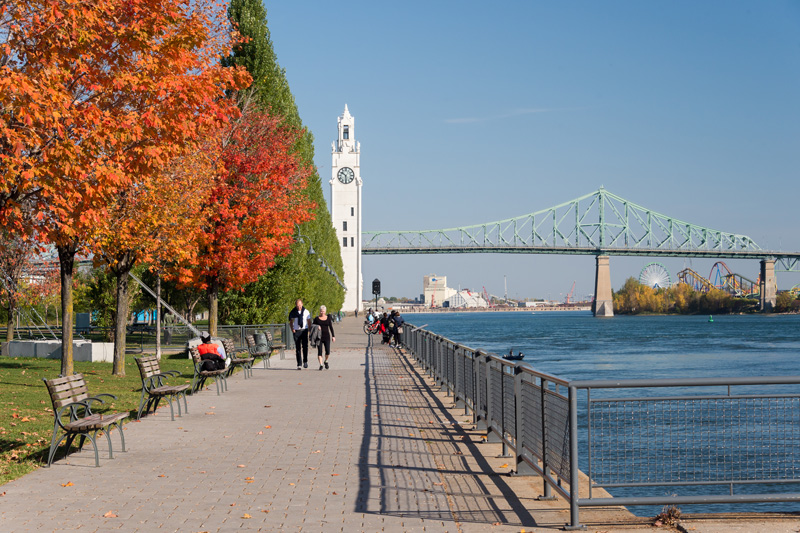 There are so many beautiful sights to enjoy while on holiday in this special city, such as Parc Jean Drapeau; Jacques Cartier Bridge or Old Port and Clock Tower Beach.

Best place to view:
Realistically, you need to buy an entrance ticket to get the very best views, but there are plenty of options to watch for free, including from Mount Royal, from where you will also get great views of the city; Parc Jean-Drapeau; Jacques Cartier Bridge or Old Port and Clock Tower Beach, both in Old Montréal.

Other things to do:
You can’t visit Montréal without taking in the aforementioned Mount Royal, a lovely sprawling park on a large hill overlooking the city with walking paths, a lake, picnic areas, historic sites and more for you to enjoy. Montréal’s other 'must-see' is the Notre-Dame Basilica, which features one of the most ornate gothic façades in the world, but otherwise the city is a place to wander around at your own pace and wait to see what is just around the next corner. Follow your nose too, as Montréal is a foodies’ heaven with a range of top-quality restaurants, as well as establishments selling regional ‘delicacy’ poutine - French fries and cheese curds topped with gravy that tastes rather better than it sounds!

There are firework displays all over the world on New Year’s Eve, with Sydney, Hong Kong, London, New York City and Rio de Janeiro among the most revered and highly rated.

Reykjavík, in Iceland, does things a little differently. Its New Year celebrations which, though on a smaller scale, are just as impressive as the professional displays highlighted above.

Instead of one major choreographed event, the Reykjavík celebrations are all about the residents of the world’s most northernmost capital. Families and groups of friends hit the streets, where they will set off around 500 tons of fireworks inside a couple of hours. Better yet, all the fireworks themselves are purchased from Iceland’s Search and Rescue teams, providing the volunteer group with some extra, much-needed funds. 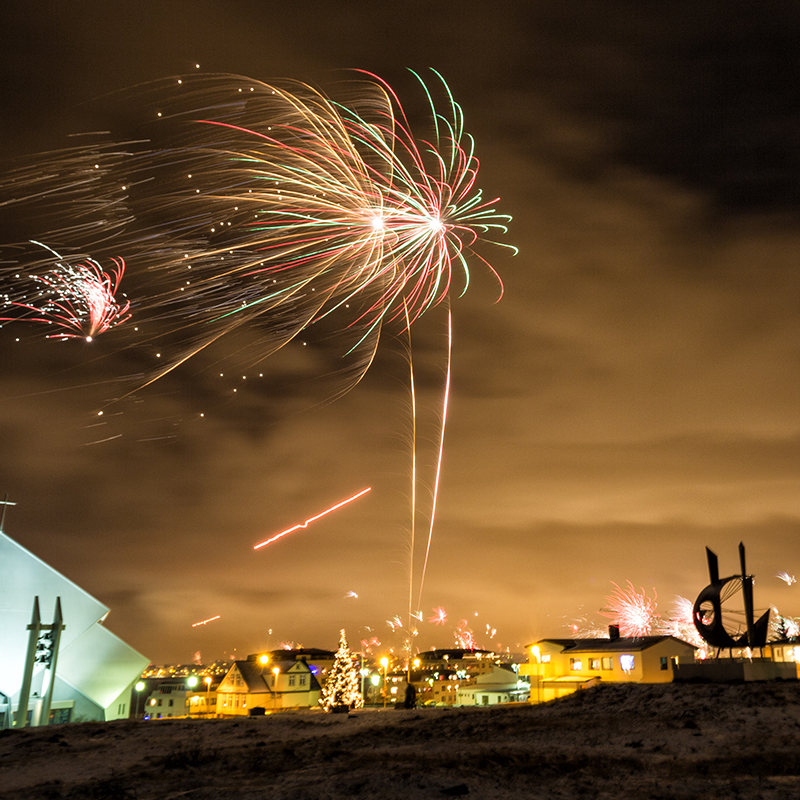 Try Reykjavík on New Year’s Eve and celebrate somewhere completely different from your usual venue. When the fireworks have faded away, make sure you go on a Northern Lights tour to see the sky aflame with a different kind of light.

Best place to view:
Given that there’s no specific display to watch, the best way to enjoy Iceland’s New Year's Eve fireworks is from an elevated vantage point, such as Perlan on Öskjuhlíð Hill or Víghóll in Kópavogur, although you’ll barely know which way to look, as things will be going off in every direction.

Other things to do:
Reykjavik is a really easy city to explore on foot, so wrap up warm and hit the streets, making Hallgrímskirkja church your first port of call. You won’t struggle to spot it, as the church is visible from almost everywhere due to its impressive 74-metre tall tower, which offers panoramic views of the city.

If you’re in town long enough, then it’s definitely worth getting out to explore more of Iceland, and the ‘Golden Circle’ tour - which takes in the incredible Þingvellir National Park, Gullfoss waterfall and Great Geysir hot spring - makes for a fabulous day out. And it goes without saying that an excursion to view the Northern Lights - nature’s own firework display - is likely to be the highlight of your trip.

If you would like to visit any of the destinations mentioned in this blog, or choose another fantastic destination for your next holiday, if you are already an RCI member, click on the RCI Resort Directory below and start your search.

If you own timeshare but are not a member of RCI - and you like what you've seen of the resorts and fabulous destinations you could be exploring in our online Resort Directory - you can open up a world of travel by becoming part of our holiday exchange community. Click on the Join RCI button below and sign up to RCI membership in just a few simple steps and let your travel adventures begin...
.